·        The DX was aided by some slightly hawkish comments from the typically dovish Charles Evans from the Fed (outlook for US economy is quite good, “what we’ve done already may be sufficient”, and wasn’t pining for further cuts) along with weakness in the euro ($1.0965 - $1.0940, misses on German and Eurozone Services PMIs) and the pound ($1.231 - $1.2266, weaker UK Services PMI).

·        Gold recovered to its $1505 high during later European hours – albeit in a very choppy manner – finding resistance at yesterday’s high.

·        US stocks sold off sharply (S&P – 34 to 2856), with losses in the Financials, Consumer Discretionary, and Industrials leading the decline.

·        By late morning, however, US stocks rebounded back into positive territory (S&P +14 to 2902), helped by some upbeat comments from Trump on US-China trade talks, and a significant increase in the probabilities of future Fed rate cuts:

·        Gold retreated, but found support at the prior resistance of $1505 - helped by the higher probabilities of a more aggressive Fed

·        Gains in the Energy, IT, Real Estate, and Consumer Staples sectors led the advance.

·        Open interest was up 10.4k contracts, reflecting a good chunk of new longs from yesterday’s rally.

·        Despite the agreement between the US and China to meet next week, bulls feel that this issue won’t be solved anytime soon, and instead expect further escalation of the trade war to ensue.  They feel this will add to further uncertainty, and increase the probability of a more severe global economic slowdown.

·        Probabilities of future rate hikes have increased in recent days off of the weak US economic data (especially large misses on both ISM Manufacturing and ISM Services) - Fed Fund Futures show:  90.3% chance of a 25bp cut at the October meeting, a 53.3% probability of two 25bp cuts by the December meeting, and a 30.7% likelihood of three 25bp cuts by the January meeting - and bulls see a rate cutting environment one in which gold can flourish

·        However, some bears used today’s bounce to get short(er) at more attractive levels

·        Still concerned with the persistent bargain hunting buying that has cushioned downside moves ($1505 held all afternoon, despite stocks and the DX trading higher).

·        Feel that markets are back to overestimating the probabilities of future Fed rate cuts, feel that the downward pressure on bond yields was also overdone, and that a modest reversal should allow the US dollar to strengthen further against other currencies as they feel the dollar still remains the “cleanest dirty shirt in the laundry basket” with the US as the sole global growth engine. Recent soft data for both Germany and the Eurozone (weak German and Eurozone Services PMI’s today) that drove the German 10-year yield further into negative territory over the past months (German bund yield remains negative and not far from record lows of  -0.743%) underscores this view.

·        Feel a US-China trade deal is in both sides’ best interests, and feel that the recent agreement to resume negotiations next week and future similar conciliatory actions will be viewed as positive steps by markets, which should help equities to continue to rebound and will put downward pressure on the yellow metal.

All markets will continue to focus on geopolitical events (especially Brexit news and Saudi - Iran tensions, Hong Kong protests), developments with the Trump Administration (especially on US-China trade, potential legal / impeachment issues), oil prices, and will turn to reports tomorrow on Germany’s Construction PMI, US Employment, Trade Balance, Baker Hughes Rig Count, Commitment of Traders, and comments from the ECB’s Guindos, and the Fed’s Rosengren, Bostic, and Powell for near term direction. 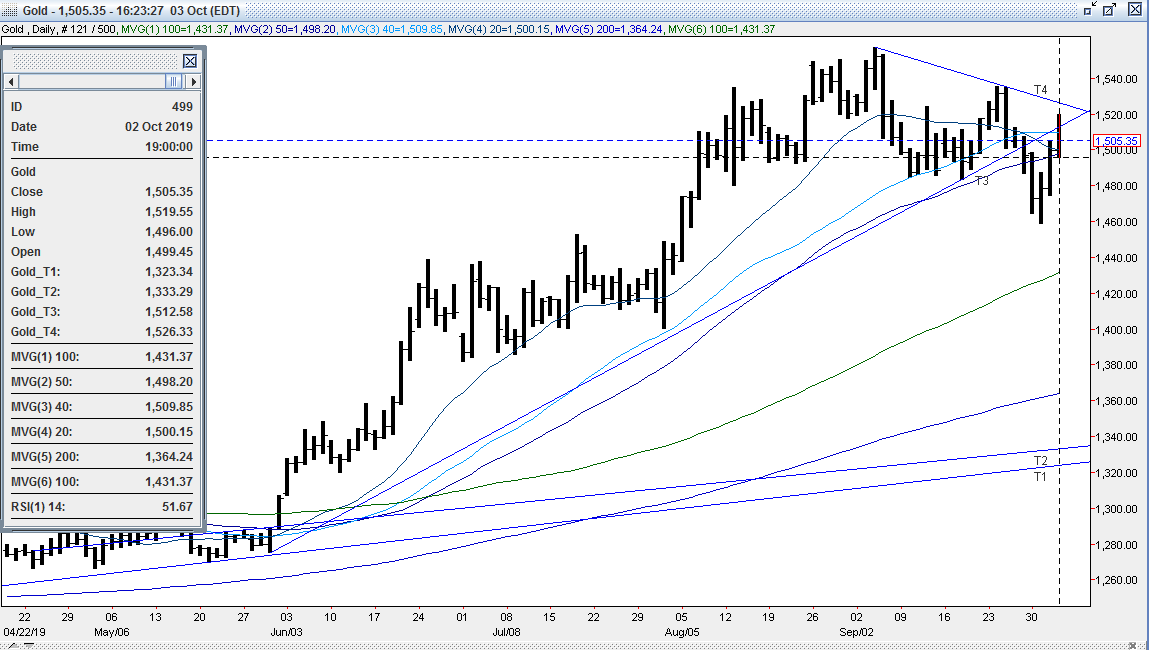 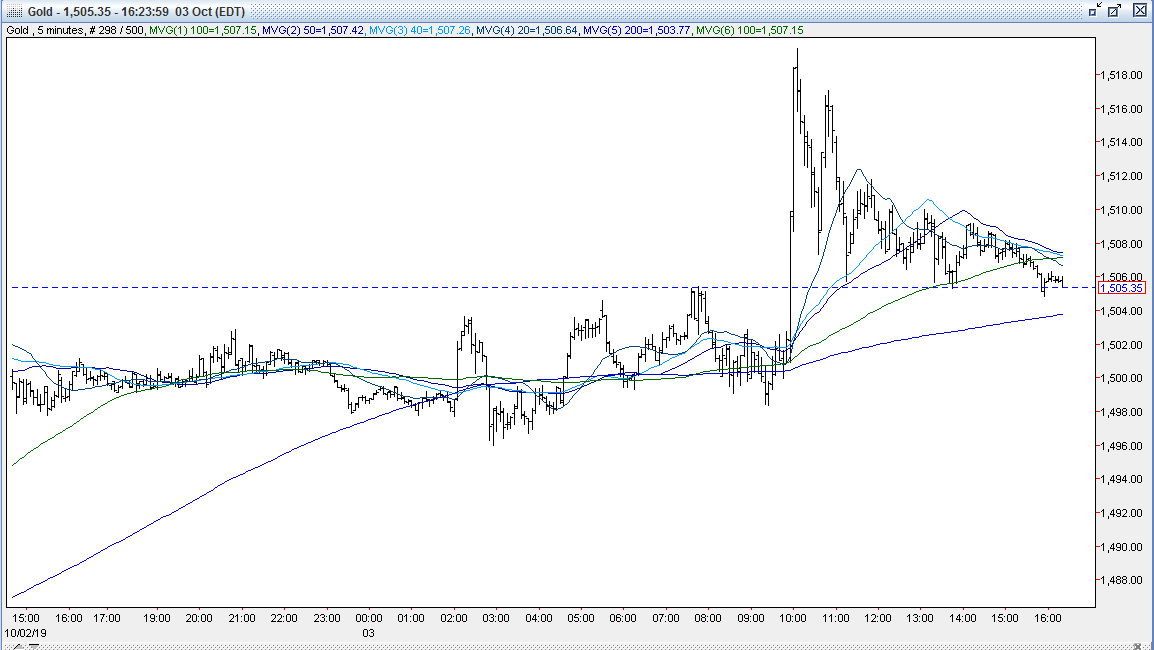 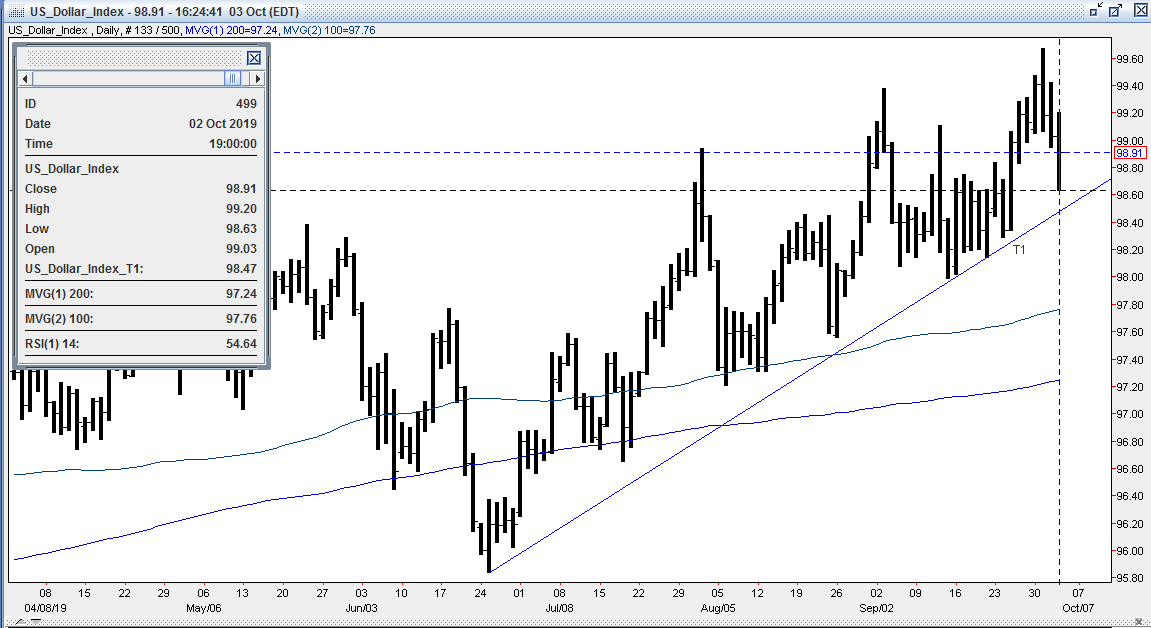 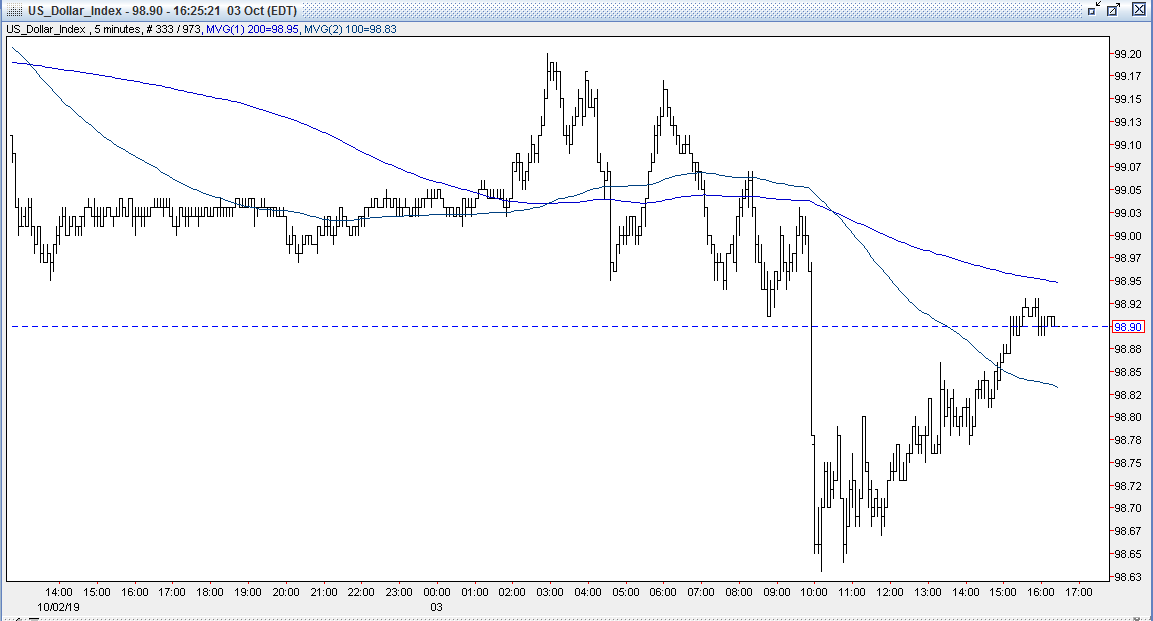