Here's The Largest Export of Every State in the U.S. for 2017

Last year, the U.S. exported $2.3 trillion worth of goods to international customers.

The country’s main exports are exactly what one would expect, with categories like aircraft, refined petroleum, vehicles, vehicle parts, and computer chips constituting the biggest chunk of overall goods.

However, today’s infographic from HowMuch.net zooms down to the state level, where things get much more interesting. Some states tow the line by exporting one of the major U.S. goods, while others specialize in categories that you probably couldn’t ever guess.

We’ll start by looking at dollar values for the states that have the single largest exports.

Here are the top 10 states: 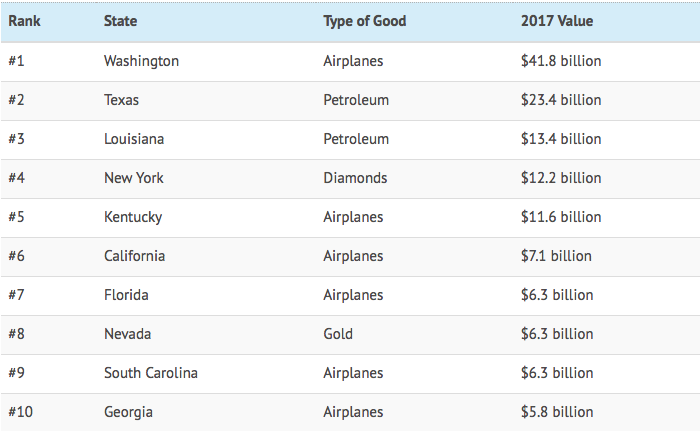 Not surprisingly, some of the top national exports are represented here.
Airplanes dominate the list, and Boeing’s presence in particular is clearly felt. The company’s major factory in Everett, WA – the largest building in the world by volume – helps the state of Washington generate $41.8 billion in export sales from the aerospace sector. That said, airplanes are also the top export good for five other states in the above list.

The Gulf Coast is also well-represented with Texas and Louisiana as major refined oil exporters. New York (Diamonds) and Nevada (Gold) round out the list.

The smaller the state, the better chance it has of specializing in a type of good that is outside of the norm.

Possibly the title of “Most Unusual Top State Export” can go to South Dakota, which sent $91 million of distillery dregs outside of the country in 2017. In case you were wondering, the U.S. Census Bureau’s full category title for this is as follows: BREWING OR DISTILLING DREGS AND WASTE, W/NT PELLET.

This spent grain is a byproduct of brewing or distilling processes, and is primarily sold for use in making animal feeds.

Other interesting states include Rhode Island, which exported $187 million of iron and steel waste, as well as Maine – a state that shipped away $326 million of its famous lobsters.