Here’s What Inflation Could Look Like in 2020, Based on Past Surges

Rising inflation has hit the headlines, sparking some attention from journalists. What most mainstream investors don’t realize, though, is that history shows inflation can quickly get out of control, and not just in some mismanaged third-world country. Surprise spikes in inflation have occurred right here in the US—and given the massive amount of currency dilution around the world over the past decade, a jump in inflation could easily kick in again.

From Zero to Raging in Two Years

Most historical inflation studies only go back to the 1970s. But as Mike Maloney has always taught, the further back you go in history, the more you can learn about the future.

I ran across a study by Amity Shlaes, an author with an impressive bio. Her research found several examples from the past 100 years when US inflation started mildly but then soared to alarming levels. What’s perhaps even more startling is that those inflationary spikes occurred within just two short years.

Check out how much the rate of inflation rose during these periods: 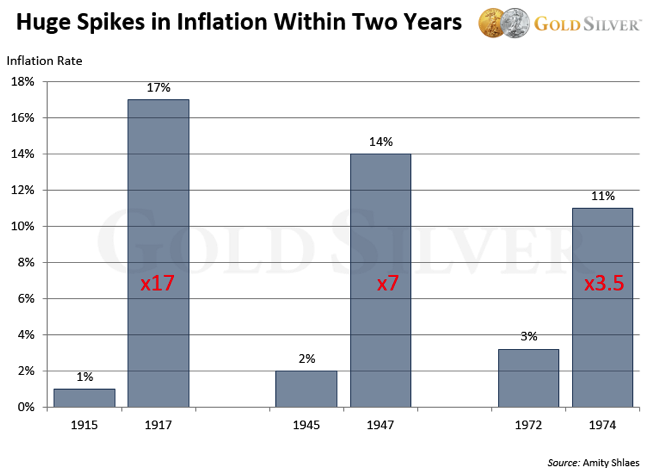 Based on an earlier version of the CPI-U, Shlaes says US inflation was at 1% in 1915. Within just two years, it soared to 17%. She reports this runaway rise in prices was because the Treasury “spent like crazy on the war, creating money to pay for it…”

In other words, there is clear historical precedence that inflation can rise suddenly and rapidly, and that prices can quickly spiral out of control. It would thus be dangerous for us to assume that inflation will stay subdued indefinitely.

In fact, you’ll notice these inflationary spikes occurred roughly 30 years apart. And it’s been over 40 years now since the last one…

Many analysts believe inflation will continue to rise, so let’s apply those historical increases to today and project how high inflation could potentially be two years from now.

If we matched any of those prior rates, here’s what inflation could look like by the year 2020, based on the current 2.38% CPI reading. 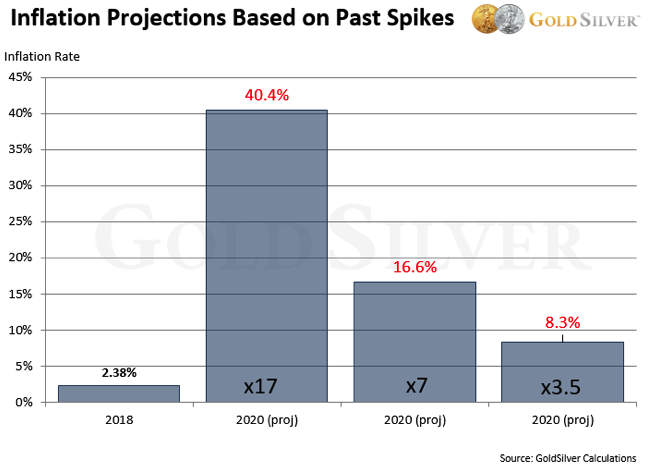 Even the least of these increases would catch most people off guard; even though real inflation (when calculated with old formulas, including items like tuition, healthcare, and energy) is quite a bit higher, when’s the last time North America was in a soaring inflationary environment?

Any of these scenarios would be good for gold, of course. And if we tip into hyperinflation, gold will still protect our purchasing power. One of the surest predictors of when the gold price will rise is when inflation takes off.

Friends, history has a clear warning: Inflation will not stay dormant forever, and will likely pay a personal visit to your household soon. Do what Mike and I and everyone else at GoldSilver are doing and protect your purchasing power.