How to Achieve 10x Returns On Your Investment

The Coming Super-Bubble in Gold & Silver

What is the Everything Bubble?

The “Everything Bubble” is a term coined by Mike Maloney to describe the convergence of many economic bubbles that have developed throughout the world today. Here are a six of them: 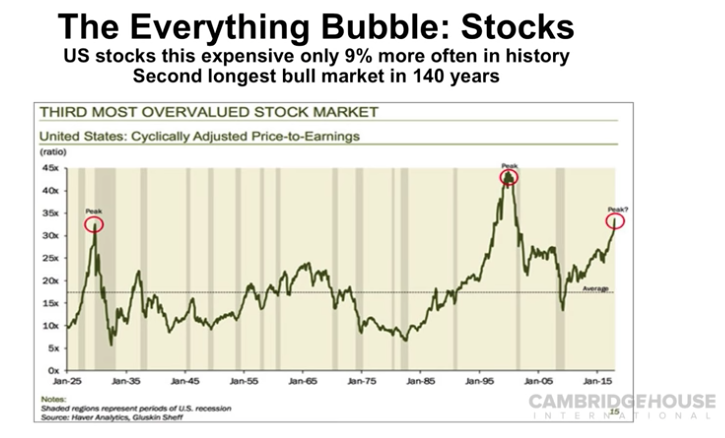 Based on the widely quoted CAPE ratio, common stocks are at their third most expensive reading in history. Perhaps even more ominous is that this is the second longest equity bull market in 140 years. 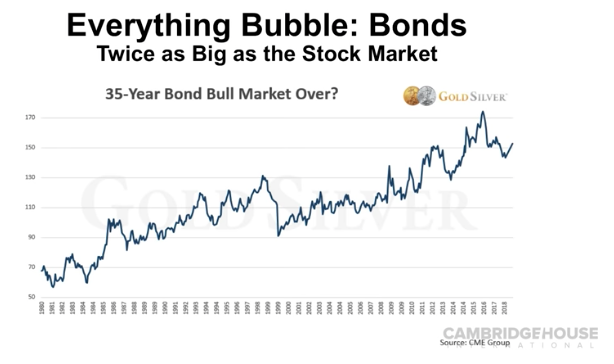 The bond market prospered while the Federal Reserve continuously lowered interest rates. What will happen now that interest rates have begun to rise?

Most investors seem to have already forgotten the lessons from the fallout of the Great Recession of a few short years ago, and continue in their mistaken belief that real estate prices must inexorably rise. Yes, they do tend to rise in times of easy money and low interest rates. But the inverse is also true; they tend to stagnate or decline as interest rates rise and money tightens — the very situation buyers face going forward. 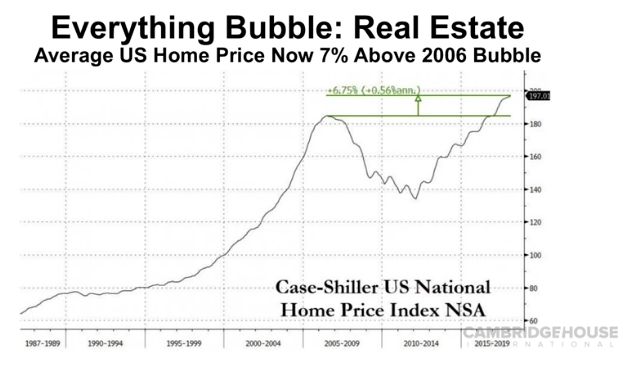 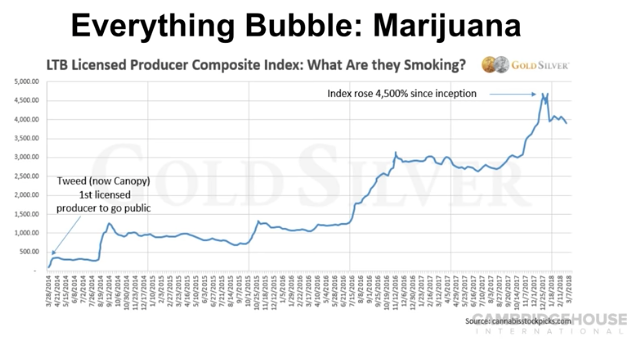 Since the first cannabis stock went public in 2014, the composite index of the these publicly traded companies rose a whopping 4,500% in under four years. 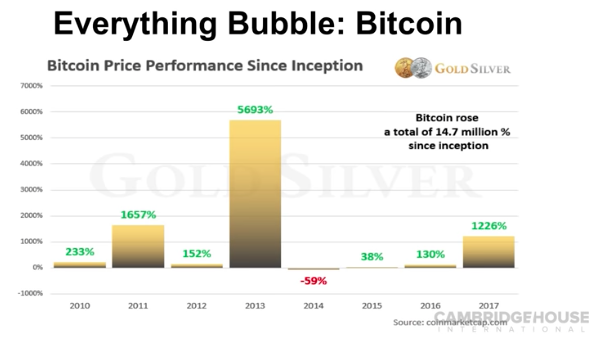 Since Bitcoin’s inception in 2008 to its 2017 peak, the price rose an incredible 14.7 million percent. This the biggest financial bubble in all of history, including the Tulip Mania from 1600s Holland. Another bubble in the price of bitcoin would counter what has occurred throughout history.

Further, thousands of additional cryptocurrencies (often referred to as alt-coins) have sprung into existence.

However, many economists and finance experts have proclaimed that cryptocurrencies are in a bubble, including famed investors Warren Buffett and Charlie Munger, Nobel laureate Robert Shiller, and even several past chairmen of the Federal Reserve.

The crypto industry will continue to develop and evolve, and bitcoin and gold do share some similar functions. But the bubble in the price of bitcoin has ended.

The Great Recession is only ten years in the rear-view mirror, so most people will remember that one of its causes was an out-of-control derivatives market. This enormous gray market exists almost entirely hidden from public view, trading on an over-the-counter basis, totally unregulated.

In 2008, worldwide financial liquidity froze up largely because this murky market had gotten so complex that its participants were trading instruments that were impossible to value. No one knew what these “assets” were worth, and even more incredibly, who even owned them as they had been traded back and forth so many times. As hard as it is to believe, no one knew who owed how much to whom.

Just 20 years ago, the derivatives market barely existed. Yet by 2008, it had grown to an almost-unthinkable notional “value” of $650 trillion. It was a bubble waiting for a pin, and that pin was supplied by the collapse of the subprime mortgage market. Look at this chart: 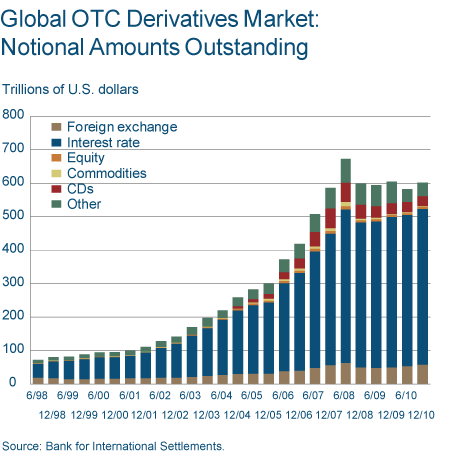 Now, look at this one: 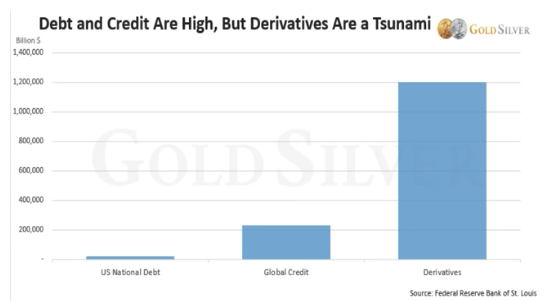 Your eyes are not lying. The derivatives market has reinflated to a level so large it is nearly impossible for the human mind to grasp. It’s nearly twice what it was when it went bust in ‘08, at $1.2 quadrillion. Yep, that’s quadrillion with a “Q”. By far the biggest number ever to appear in financial history.

For comparison purposes, the next largest market is global bonds, at $100 trillion; the US stock market checks in at just over $30 trillion; and the global precious metals market is barely visible, at a relatively miniscule $300 billion.

What Else Could Push Precious Metals into a Hyper-Bubble?

In addition to market bubbles, there are other factors that could push the prices of gold and silver much, much higher.

Decline in Purchasing Power for the US Dollar

The US Dollar is due for a bear market, and those bear markets tend to last for a long time.

We’ve had a lot of “quantitative easing” (QE) in recent history, as the Federal Reserve tried to right the American economic ship through massive US-dollar currency inflation. It digitally conjured money by the tanker-load, monetizing debt to buy up bonds and other assets — including mortgage-backed junk from the bank bailouts — and its balance sheet rocketed from less than $1 trillion to $4.5 trillion in seven short years. 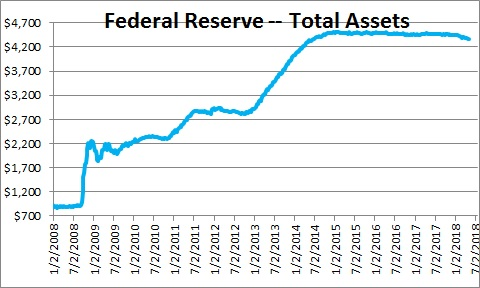 The Fed is now in the midst of “unwinding” all that QE. It proposes to demonetize enough to shrink its balance sheet in half, to $2.2T, by 2020. This is an experiment such as the world has never seen, and as such, no one can presume to accurately predict the outcome, although many economists think that just as the equities markets followed QE higher, they will also follow this demonetization lower. At best, the risk of extreme volatility in the equities markets is very high.

Recession or Other Deflationary Event

This is the second-longest economic expansion in US history. Expansions invariably alternate with contractions. 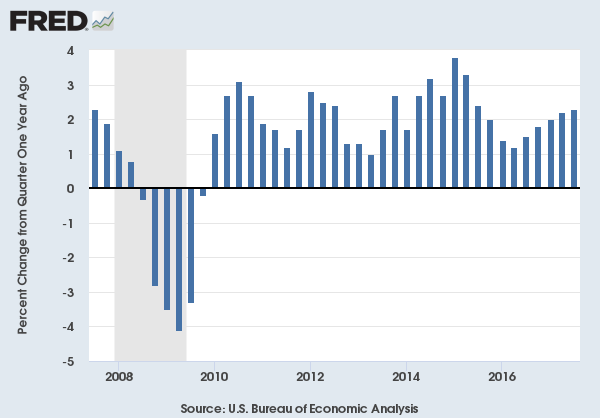 And this expansion has been fueled by a monetary policy that reduced the federal funds rate to near zero. 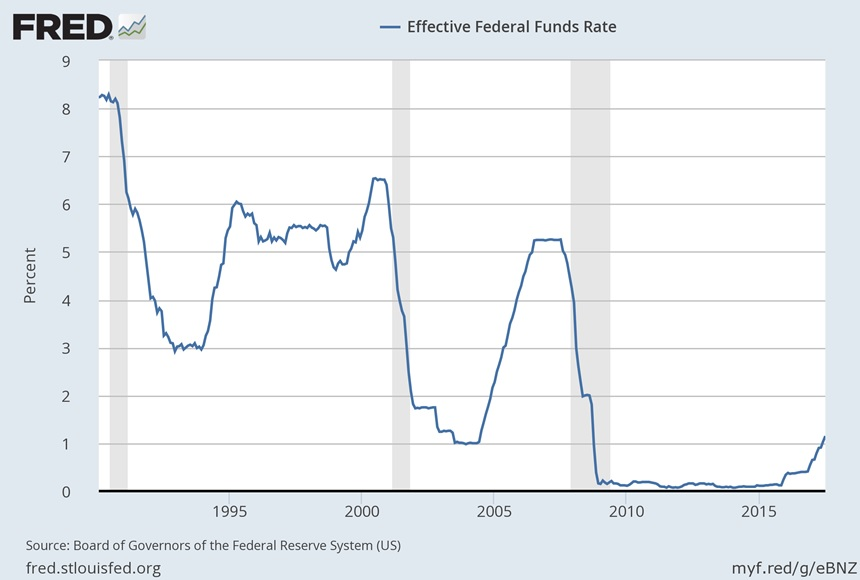 Given historically low interest rates, Americans borrowed like there was no tomorrow. This caused consumer debt to spike to an alltime high, at 26% of disposable income, as this chart shows: 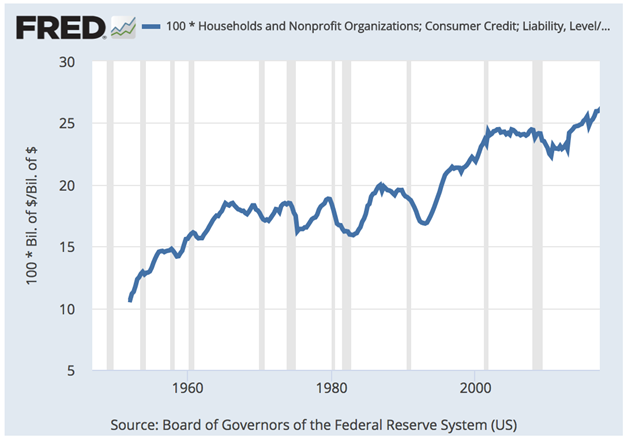 In just the past five years, consumer debt (all household debts, excluding mortgages and home equity loans) has grown at about twice the pace of household income.

This is not sustainable. As the accumulation of debt continues to outpace wage growth, there will come a day of reckoning, when consumers must deleverage or default en masse. Either way, recession will be the result.

From 1980 to 2000, there was an explosion in the production of gold from both older and newly-opened mines. Since then, there has been an almost equally dramatic drop-off. 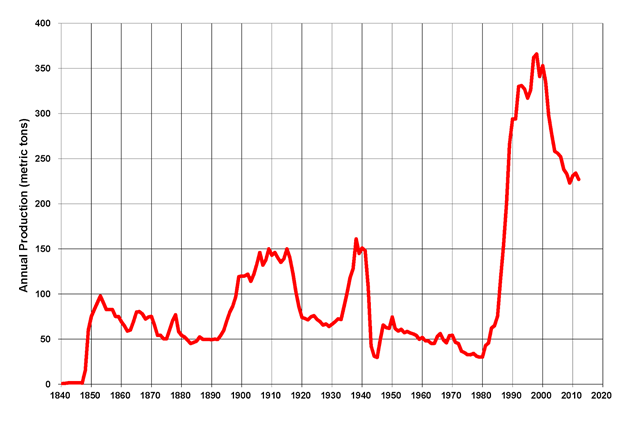 There is already a gold supply crunch, and it’s going to get worse. It’s pretty simple: most (and at least one leading gold company executive says all) of the easy-to-recover gold has been mined. Hardly any new mines are being discovered, and those coming online are of very low grade. At the same time, exploration and development costs have drastically increased, to the point where few new mines can be profitable. Reserves are not being replaced.

The World Gold Council has estimated that world supply may have peaked. Frank Holmes, chief executive officer of U.S. Global Investors Inc., agrees, maintaining that mine supply topped out in 2017 or will do so this year.

As for silver, supply has more or less kept up with demand, but the CPM Group— a leading precious metals consultancy— says that the lack of exploration and development spending in recent years will begin to have a negative effect beginning as early as 2019. This will happen as demand from the industrial sector ramps up considerably.

What Other Assets Are in a Bubble?

When Any or All of These Bubbles Pop, What Happens?

There’s no risk asset offering an easy out this time. The Fed is tightening interest rates, stocks are at nosebleed levels, and the easy money is drying up. Results?

Are There Undervalued Assets?

As noted above, even much of the collectibles market is running red hot. Are precious metals undervalued? It may seem difficult to view them in that way, but considering a little recent history will help.

Stocks have been in a nearly 10-year, uninterrupted bull market. For a while, gold and silver followed along. After it bottomed in 2007, gold tripled to its top in 2011. Silver nearly quintupled between 2008 and 2011. At which point, speculators took profits and, seeking higher returns elsewhere, jumped on the stock train.

After its 2011 peak, the gold price dropped by about 50% and silver tumbled 65%. Both metals have since stagnated, remaining tightly range bound since mid-2013.

After the real estate bubble popped in 2008, ushering in the Great Recession, precious metals declined along with stocks. But they both bounced back in a big way. When the next bubble pops— stocks, bonds, collectibles, real estate (or perhaps all four simultaneously) — will gold and silver also hit the skids again?

We can’t say for sure, but think it’s unlikely that they’ll fall as far or as fast as they did in the Great Recession. For one thing, the Fed may not provide the easy money necessary to reignite stocks. For another, a severe pullback in stocks might well sour investors on that market for years to come. On the other hand, precious metals should shine as the go-to safe haven for investors looking to weather the storm created by popping bubbles. But even if they do decline, they are highly unlikely to lose value to the same degree as stocks and bonds. And they will not drive people from their homes the way a real estate crash will.

So yes, precious metals should be considered undervalued right now: compared to their peaks, measured against the likely results of other markets crashing, or assuming that their recent stagnation is a consolidation phase in the bull market that began at the turn of the century.