The Effect of a Stock Market Collapse on Silver & Gold

Many investors hold gold and silver to hedge against various economic crises. But does this hedge hold up during stock market crashes? Knowing what effect a market plunge and subsequent dollar collapse will have on silver and gold is vital to making investment decisions now and then deciding what course to take should a major recession or depression occur.

It’s a common assumption that gold and silver prices will fall right along with the market. And if that’s the case, wouldn’t it be better to wait to buy them until after the dust settles? But suppose that the investors have it right and that their precious metals do retain their value — or even gain value. During a depression, is it better to hold gold or silver? In other words, which one is going to give you the best chance of weathering the storm?

Before formulating a strategy, let’s first look at price data from past stock market crashes… and see what it can tell us that might influence investment decisions.

The Message from History

To help answer the questions posed above, I looked at past stock market crashes and measured gold and silver’s performance during each of them to see if there are any historical tendencies. The following table shows the eight biggest declines in the S&P 500 since 1976 and how gold and silver prices responded to each.

[Note: Green signifies the value rose when the S&P crashed, red means it fell more than the S&P, and yellow denotes it fell but less than or the same as the S&P.]

What Happens to Gold and Silver During Stock Market Crashes 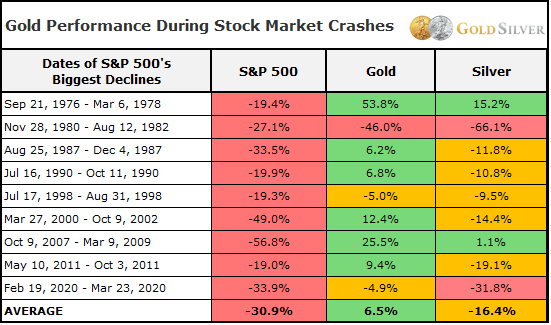 There are some reasonable conclusions we can draw from this historical data.

1. In most cases, the gold price rose during the biggest stock market crashes.

Does gold go up if a stock plunge occurs? In recent times, the answer has usually been, “Yes!” Notice this was regardless of whether the crash was short-lived or stretched over a couple years. Gold even climbed in the biggest crash of them all: the 56 percent decline that lasted two full years in the early 2000s. It seems clear that we should not assume gold will fall in a stock market crash — the exact opposite has occurred much more often.

2. Investors shouldn't panic over an initial drop in gold prices.

You’ll recall that gold did fall in the initial shock of the 2008 financial crisis. This recent, albeit memorable, instance is perhaps why many investors think gold will drop when the stock market does. But while the S&P continued to decline, gold rebounded and ended the year up 5.5 percent. Over the total 18-month stock market selloff, gold rose more than 25 percent. The lesson here is that, even if gold initially declines during a stock market collapse, one should not assume it’s down for the count. In fact, history says it might be a great buying opportunity.

3. Gold’s only significant selloff (46% in the early 1980s) occurred just after its biggest bull market in modern history.

Gold rose more than 2,300 percent from its low in 1970 to the 1980 peak. So it isn’t terribly surprising that it fell with the broader stock market at that point. In recent years, the situation has been the exact opposite. Gold endured a 45 percent decline from its 2011 peak to its 2016 low, which was one of its worst bear markets in modern history. At the same time, this isn’t entirely a shock either, given its quick gains during the 2008 crisis and the 2011 crash.

4. Silver did not fare so well during stock market crashes.

In fact, it rose in only one of the S&P selloffs and was basically flat in another one. This is likely due to silver’s high industrial use (about 56% of total supply) and that stock market selloffs are usually associated with a poor or deteriorating economy. However, you’ll see that silver fell less than the S&P in all but one crash. This is significant because silver’s high volatility would normally cause it to fall more. Also notice that silver’s biggest rise (+15% in the 1970s) took place amidst its biggest bull market in history. It also ended flat by the end of the financial crisis in early 2009, which was its second-biggest bull market. In other words, we have historical precedence that silver could do well in a stock market crash if it is already in a bull market. Otherwise, it could struggle.

• Odds are high that gold won’t fall during a stock market crash, and in fact, it will likely rise instead. Silver might depend on whether it’s in a bull market.

So, why does gold behave this way?

The reason gold tends to be resilient during stock market crashes is that the two are negatively correlated. In other words, when one goes up, the other tends to go down.

This makes sense when you think about it. Stocks benefit from economic growth and stability while gold benefits from economic distress and crisis. If the stock market falls, fear is usually high, and investors typically seek out the safe haven of gold. If stocks are rockin’ and rollin’, the perceived need for gold from mainstream investors is low.

Stocks Have a Negative Correlation to Gold 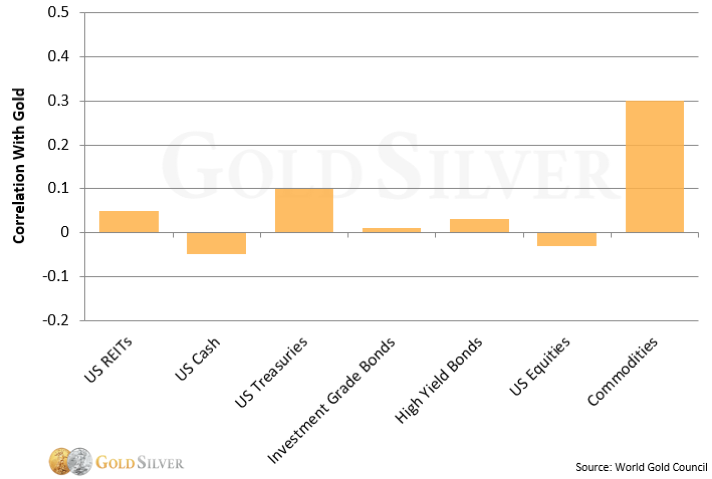 You can see that, on average, when the stock market crashes (U.S. Equities on the chart), gold has historically risen more than declined. Gold has also historically outperformed the cash sitting in your bank account or money market fund. Even real estate values follow gold only a little more than half the time.

This is the practical conclusion for investors:

There’s one more possibility we have to consider…

What if the Stock Market Doesn’t Crash?

It’s not always easy to predict if stocks will fall off a cliff. So what if they don’t? Or what if the market is just flat for a long period of time? You might think that’s unlikely, given the number of risks inherent in our economic, financial, and monetary systems today. But look at the 1970s — it had three recessions, an oil embargo, interest rates that hit 20 percent and the Soviet invasion of Afghanistan. Here’s how the S&P performed, along with how gold performed. 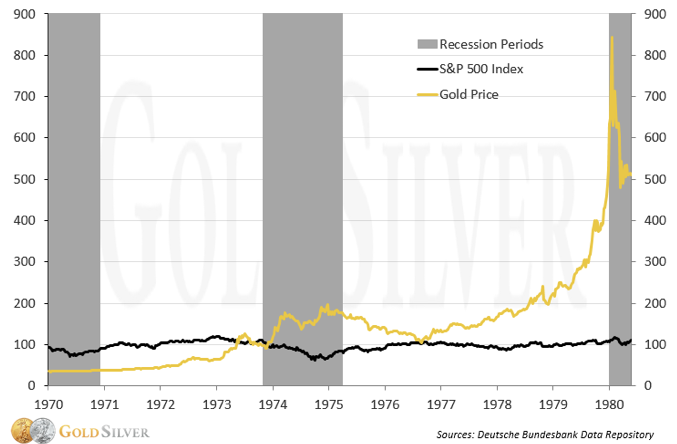 In other words, gold’s biggest bull market in modern history occurred while the stock market was essentially flat. That’s because the catalysts for higher gold were unrelated to the stock market — they were more about the economic and inflationary issues occurring at the time. We have to allow for the possibility that this happens again and that citizens are drawn to gold for reasons unrelated to the performance of the S&P.

How Long it Takes to Recover from Stock Market Crashes

Stock brokers will sometimes point to 100-year chart of the stock market and show that it always eventually recovers and heads higher, even after big crashes. What they don’t show, however, is how long it takes to recover after accounting for inflation.

Some stock market crashes have taken a long time to get back to even—so long, in fact, that if the investor were to spend the proceeds they’d find that the same amount of cash wouldn’t buy them as much. Because the recovery took so long, inflation eroded their purchasing power, despite gaining back all that they’d lost in the crash.

Believe it or not, the amount of time it takes to regain one’s purchasing power after the biggest stock market crashes is measured in years.

What we know from history is that the best defense against both the prospect of a stock market crash and the corroding effects of inflation is gold.

Anything can happen when markets are hit with extraordinary volatility. But regardless of what stocks might do, is it wise to be without a meaningful amount of physical gold and silver in light of all the risks we face today? I don’t think so.

Perhaps the ideal solution is to have a stash of cash ready to deploy if we get another big decline in precious metals — but to also have a stash of bullion already set aside in case the next crisis sends gold off to the races.