There’s been lots of talk about the possibility of price inflation in response to the surge in monetary and fiscal stimulus. It’s an important consideration for us bullion investors, as one of the biggest catalysts for gold and silver is the onset of higher consumer prices. And you gotta own your inflation protection before it sets in.

But the CPI has remained stubbornly low. This despite the Fed trying to produce higher inflation. And despite most people’s experience of higher consumer prices.

As some of you on Twitter know, I lost my father last week (you can see my tribute to my gold prospector Dad here). I was absent from the market for a couple weeks and noticed upon my return that despite the volatility and market-moving news, gold and silver prices really hadn’t changed all that much. I can imagine myself wondering how event xx or yy would have impacted the gold price at the time—but those ended up being transitory things only. What matters more are the big picture forces—and inflation is one of the biggest.

This statement makes sense on the face of it, but seminal research has been done that confirms a country cannot escape high inflation when it carries oversized debt levels. Sooner or later, the negligence catches up to you, regardless of what the latest batch of economists and politicians and central bankers may claim.

The first historical study is detailed in the book, This Time Is Different, by Carmen Reinhart and Kenneth Rogoff, who've extensively researched the impact of high debt on inflation and gross domestic product (GDP).

Based on a comprehensive study of global incidences, Reinhart and Rogoff concluded the following: 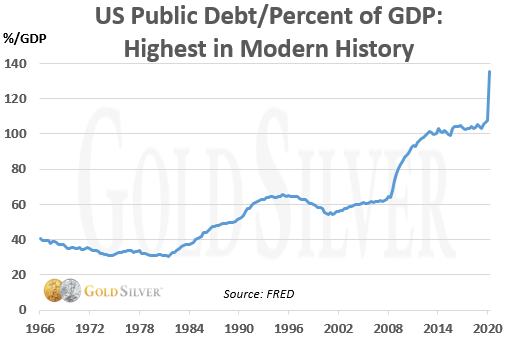 At the end of Q2 (the most recent data available), the federal debt registered 135.6% of our GDP. It has never been this high in modern history.

With regard to timing, Reinhart and Rogoff state there is “no apparent pattern of simultaneous rising inflation and debt.” In other words, inflation is a clear and definite result of high debt levels, but it's not a daily link. This probably contributes to the current lag between high debt and a low CPI reading.

But the eventuality is clear: based on historical research, this level of debt, unless corrected immediately, will lead to inflation.

Peter Bernholz is widely considered the leading expert on the link between deficit spending and hyperinflation. In his book Monetary Regimes and Inflation, he conclusively states that... 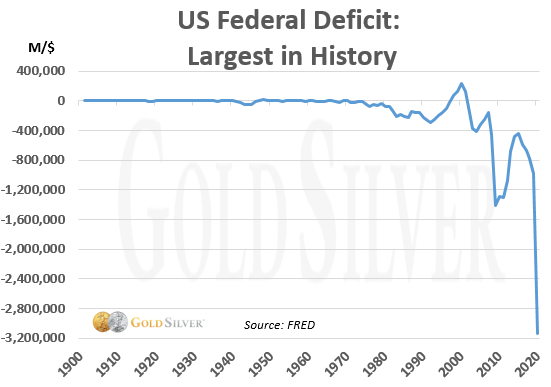 The US Federal deficit has never been this high in recorded history. It’s more than twice the level of the Great Recession.

This data suggests that the hyperinflation Bernholz warns about has just become a possibility.

Based on history, these two factors should lead to higher price inflation. It may not be imminent, but the point is that we have met both criteria for a substantial rise in consumer prices.

I’m sure some might point out that a vaccine would speed up an economic recovery and lower the need for more stimulus—and thus reduce the need for gold. Not so fast… a valid and distributable vaccine would also mean the velocity of currency would likely move substantially higher, a main trigger of inflation.

And don’t forget that the Fed unveiled a policy in August that it will not just tolerate higher inflation but seek a rate above its 2% target. The powers that be are pushing for higher inflation rates.

We can debate if the recent actions taken by the Fed and politicians are the correct paths or not. But the sobering reality is:

It almost goes without saying that gold and silver one of mankind’s best shields against inflation. Gold has even risen faster than hyperinflation. Silver’s biggest gains were during the runaway inflation of the 1970s, and the fear of inflation from 2009-2011.

But perhaps the most important message isn’t just that inflation is coming, but that you must have the bullion you want before it sets in. That’s because once it starts to run, inflation can quickly spiral out of control.

It will catch most people off guard. My advice is to make sure it doesn’t catch you unprepared.