We’ve mentioned before that Jeff is occasionally asked to prepare reports for institutional investors. This summary of gold’s performance in the second quarter of 2019 was sent to various advisors and brokers. We thought we’d share with you what some institutional investors are reading. - Alexander Trigaux, Editor

This report briefly examines the performance of gold and other major asset classes during the second quarter of 2019, along with YTD performances. We also highlight the conditions that could specifically impact the gold market going forward.

Gold began the second quarter at $1,295 per ounce. The price was flat in April and May, then spiked in June due to the Fed‘s increasingly dovish stance, the conflict with Iran, and the ongoing US/China trade war. Gold ended the quarter up 8.8%.

Here is the performance of gold and other major assets classes in the second quarter (April through June). 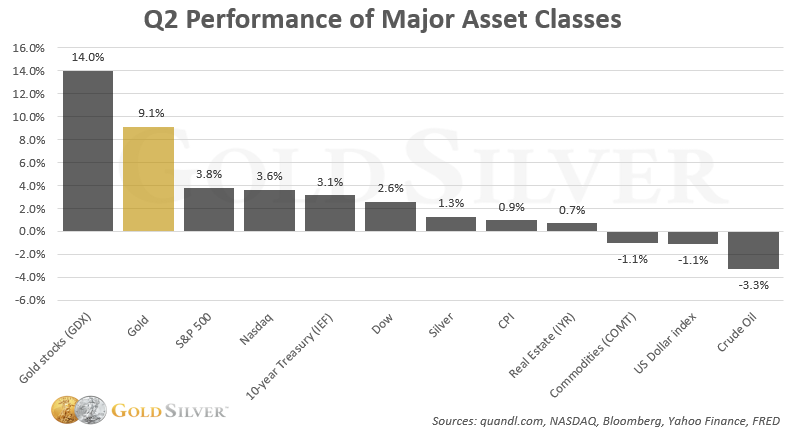 Gold outperformed all major investment categories in Q2, including stocks, bonds, real estate, and commodities. Unsurprisingly, gold mining equities also had a strong second quarter. In contrast, the US dollar and an index benchmarked to a broad basket of commodities each fell 1.1%.

Here’s how the same investments have performed year-to-date. 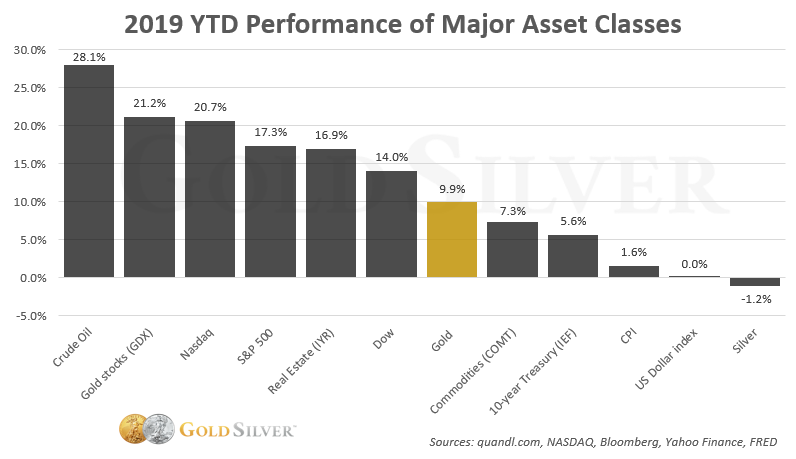 Gold is up 9.9% for the year, besting commodities, Treasuries, and the US dollar. Common stocks remain in a bull market.

The gold price as measured in other currencies paints an even more striking picture. Notice where each ranked historically at the end of the second quarter.

In total, gold is now at or near all-time highs in 72 currencies. To put the importance of this in perspective, the US represents only 4% of the world’s population.

Unsurprisingly, gold’s volatility also spiked. The CBOE Gold ETF Volatility Index (GVZ) ended the quarter 61% higher than where it started. However, the current reading of 15.9 remains roughly 25% below the Index’s 10-year average of 20.

Silver continues to trail gold and is down 1.1% on the year. Gold’s stronger relative performance has pushed the gold/silver ratio (gold price divided by the silver price) higher. The ratio began the quarter at 85.8 and ended at 92.1, a 28-year high. Historically silver trails gold in the beginning stages of bull markets, then catches up and surpasses it. This makes silver an especially strong buy at present.

While our investment thesis is not predicated upon technical analysis, many chartists maintain that the gold price broke above a critical long-term resistance level in June. Gold had not exceeded $1,400 since August 2013, failing to break through the $1,380 level six separate times. The momentum demonstrated by a move that has shattered this stubborn six-year ceiling is well worth watching, as it appears gold has moved into a new price range.

Last, we’ll point out that Bitcoin spiked 200% last quarter, and is up 230% YTD. As a result, GoldSilver.com has seen a spike in bullion purchases from Bitcoin users. 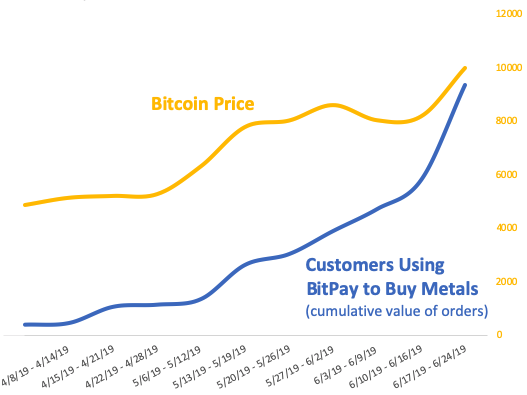 A significant number of cryptocurrency investors are taking profits and buying gold.

A number of potential factors could impact the gold price over the coming quarter.

The Fed: The US central bank has made a major dovish pivot, going from a steady rate-raising regime, to pausing those hikes, to now likely cutting them. All in just six months. When discussing the likelihood that the Fed will have to again resort to 0% interest rates and additional rounds of QE in the future, Chairman Jerome Powell said it was inevitable: “There will be a next time.”

It’s not just the Fed; other central banks are equally as accommodative, which is bullish for gold. As Bloomberg’s Eddie van der Walt said, “With central banks around the world turning more dovish, the latest move may just be the start.”

Interest Rates: As the quarter closed out, traders had priced in a near-100% certainty that a rate cut will be made at the Fed’s July meeting, though that number has since pulled back to about 85%. Interest rate reductions are typically gold-positive, since they diminish gold’s holding cost and lower the competition from Treasuries. Some of gold’s rise may reflect that a cut has been priced in, though research from the World Gold Council shows that gold tends to perform well when the Fed is neutral or dovish.

Negative Interest Rates: The amount of government bonds paying less than zero continued to make headlines, hitting a new high in late June. Globally, a total of $13 trillion in government debt now offers sub-zero yields, rising by $2 trillion in the last 30 days alone. In fact, negative-rate debt now makes up almost 40% of the value of all government bonds outstanding.

This trend continues to be particularly prevalent in Europe. Last month French and Swedish 10-year yields fell below zero for the first time ever. Nearly all debt issued by the Swiss government – from one-month to 20-year maturities – now carries a negative yield. This is closely followed by Sweden (91% of all government debt), Germany (88%), Finland (84%) and the Netherlands (84%).

In all, central bank activity around much of the world has become decidedly more accommodative. OECD Secretary-General José Ángel Gurría publicly stated that central bankers “have run out of ammunition.” Our research confirms this is indeed the case, which is very supportive of higher gold prices.

Trade Wars/Currency Wars: President Trump has complained loudly and frequently about trade imbalances and currency manipulations by foreign governments. It is expected that ongoing trade conflicts and overt efforts to weaken the US dollar would be gold-bullish.

Geopolitical conflicts: The clash between the US and Iran made geopolitical headlines in June. Iran shot down a US drone over international waters… President Trump imposed sanctions to freeze the assets of Iranian military commanders including the Supreme Leader… Iran claimed US sanctions “closed the door on diplomacy”…  Trump threatened a heavy military response if Iran attacked any US interests.

Ongoing tensions between the two countries could continue to support gold prices, particularly if the conflict escalated.

Central Bank Gold Purchases: We’ve been highlighting the increase in central-bank buying in our reporting, which reached 45-year highs at the end of 2018. This price support has continued into 2019: Kazakhstan, Russia, and Turkey all added to official reserves last quarter. Through May, China has added to its gold reserves for six consecutive months. There is no evidence that this trend has let up.

Recession Watch: The yield curve (as defined by the spread between 10-year and 2-year Treasuries) ended Q2 at a paltry 0.24%. The last six times the yield curve inverted a recession followed shortly thereafter. Meanwhile, the US Manufacturing PMI fell to 10-year lows in May. Gold has historically performed well during recessions.

An appropriate balance of gold in a portfolio can serve as a useful hedge, particularly in light of the Fed’s new dovish stance, ongoing geopolitical conflicts, the unrelenting growth in negative interest rates, and trade and currency wars.