The #1 Performing Asset Around the World — New Video

Unbeknownst to most mainstream investors, gold has been the best performing asset of this century.

It’s really true, as the first table shows in video #5 from Mike and Ronnie. Other than a few cryptos, gold has been the top investment since 2000.

That’s’ especially true for gold priced in other currencies. Check out all the green in the first table.

As a result, Ronnie did something we haven’t seen anyone else do: he and his team calculated a “world” gold price. In other words, a trade-weighted average of the gold price in all currencies combined.

Here’s what it looks like (gold line) vs. the US dollar price of gold (blue line). 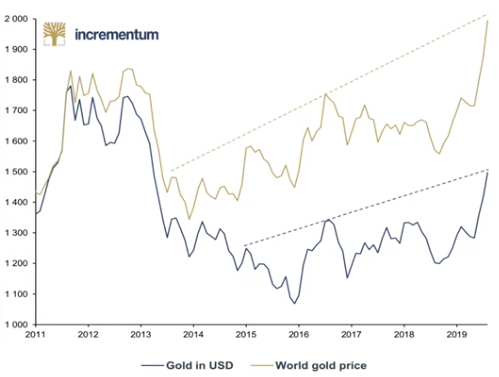 The world gold price, across the average of all fiat currencies, is at all-time highs. It’s the equivalent of about $2,000, roughly $500 higher than the US dollar price of gold alone.

There’s a message in there for all of us: when your currency weakens, the gold price strengthens.

Ronnie and Mike point out how ludicrous it is that countries are trying to weaken their currencies relative to each other. Most assume they need a weak currency to stimulate growth and industry—but as Ronnie states, “that is complete nonsense!”

On a long-term basis, only countries with strong currencies are the most productive and successful. A strong currency forces you to be more innovative and to create better products. A weak currency is nothing but a temporary solution to a long-term problem.

A weak currency also means stronger gold. History repeatedly bears this out, including over the past couple decades.

If you, like us, think weak days are ahead for the US dollar, then buy gold. It’s the anti-dollar, the one “currency” that will rise more and more as the dollar falls lower and lower.