The Fiat Free-For-All: Currency Creation vs. Gold and Silver Production

Most headlines about the Fed’s open market committee (FOMC) announcement focused on the potential change in interest rates. What went largely ignored was that it will continue to purchase $120 billion in bonds every month.

The central bank said it “might” raise rates in 2023, but there was NO hesitation to continue full steam ahead with its aggressive bond-buying program.

This QE program amounts to $1.44 TRILLION annually in new bank reserves (which are used to purchase Treasuries). And it’s all created out of thin air.

To put that amount into perspective, the market capitalization of IBM is $130 billion. So the Fed creates the currency equivalent of another IBM nearly every month.

That’s a lot of currency. If you live to 95 you will have been alive for three billion seconds. The Fed is creating 40 times more digital dollars than that each and every month.

It takes only a rudimentary understanding of economics to know that the more you create of something, the less valuable it becomes. This is why fiat currency is ultimately a faulty system; politicians and central bankers can’t resist the temptation to solve their problems by printing more currency… which creates more debt… which weighs down the economy… which they respond to by creating more currency… and around we go. This is why Hidden Secrets of Money episode 7 will still play out.

Let’s contrast that to real money…

How does the Fed’s $120 billion/month compare to the value of gold and silver production? We ask this because gold and silver can’t be created out of thin air, and are limited in supply. This is one reason gold or bimetallic standards have been used in the past: they impose discipline, because a country can’t spend more than the gold and/or silver it produces.

The gold mining industry produced 97.5 million ounces globally last year. On a monthly basis that’s 8.125 million ounces. Gold’s average price so far this year is about $1,800, so the monthly value of production is $14.2 billion.

Here’s how those amounts contrast with the Fed’s current QE program. 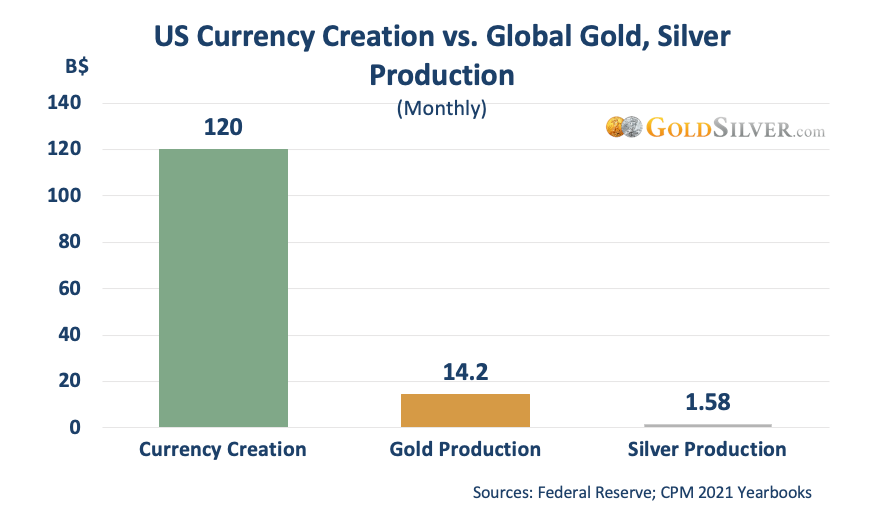 And this isn’t even an applies-to-apples comparison: it excludes QE efforts from other central banks around the world. If we added in their amounts—or just compared US printing to US gold production—the values for gold and silver wouldn’t be visible on the chart.

Some of you may point out that 2020 mine production was an anomaly due the pandemic. It did decline—but gold production was already in a downtrend. Mine capacity—how much new production is scheduled to come online each year—is just 744,000 ounces for 2021, the lowest level since 2011. And almost every report I read says this trend will continue for at least the next several years.

Ditto silver. New mine supply has been in a declining trend since 2016, and is now at the lowest level since 2012.

How Valuable is Something You Create With a Keystroke?

We also have to consider the time and effort it takes to produce gold and silver.

The Fed and most central bankers today create new currency with a computer and mouse—point, click, voila!

But producing real money takes a full decade—from exploration and discovery to development, production and distribution. 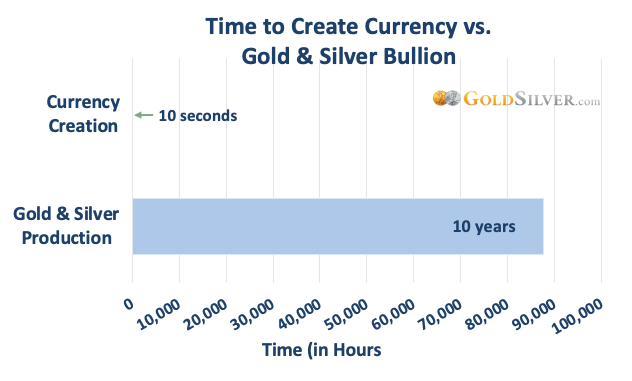 Most currency today is basically “imagined” by a central bank, with the new digits credited to banks and other entities. Easy peasy.

But how valuable is something that can be created in literally seconds, with little effort? This is one reason a gold standard can work; it takes real work and lots of time to bring gold to the market, which limits the amount of spending politicians can do (which is why they’ll fight it if it’s ever introduced again).

But here’s the kicker to all this…

Today’s Paycheck Will Never Buy You More Than Right Now

It’s a sobering thought to realize this fact:

The cash from your next paycheck will only lose more and more purchasing power as you move forward in life.

Here’s how much buying power the dollar you earned in 2000 has lost. 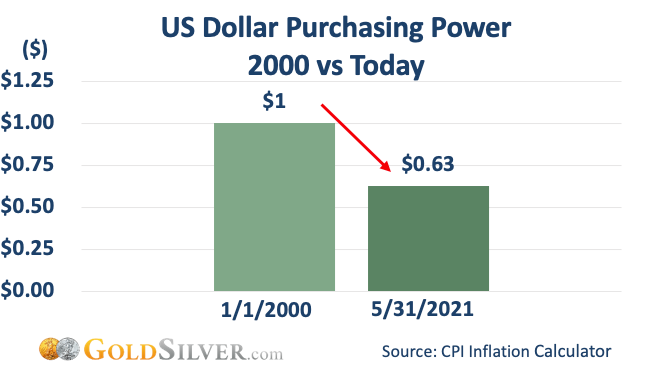 Your paycheck from 2000 will now only buy you 63¢ worth of goods and services.

Gold and silver, on the other hand, are long-term stores of value. They maintain purchasing power—and over the past 21+ years have increased one’s buying power. 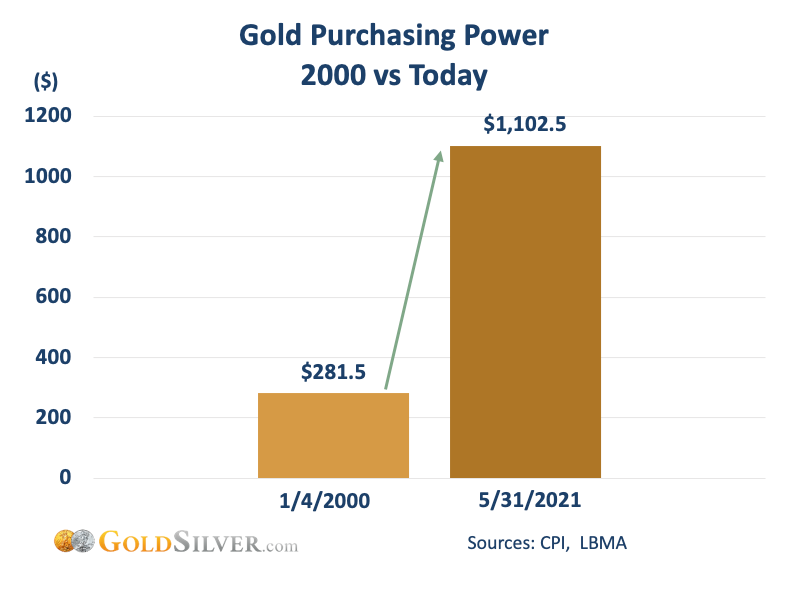 After adjusting for inflation, the ounce of gold that sold for $281.5 in 2000 will now buy you over $1,100 worth of goods and services. That’s nearly a three times increase in buying power (before taxes).

Silver has improved one’s buying power as well, despite not having risen as much as gold during this period. 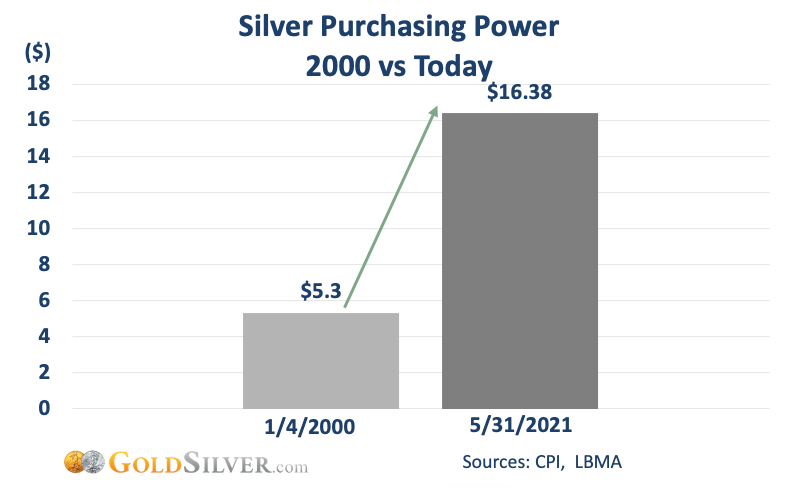 After adjusting for inflation, silver’s purchasing power has grown 209% over the past 21 years. While the dollar has robbed 37% of your buying power.

Given that silver has historically always outperformed gold in bull markets, it would be entirely unsurprising if its purchasing power exceeded that of gold’s over the next few years.

Don’t put your faith in the fiat free-for-all. Instead put your financial future in the hands of real money.

Keep accumulating, my friends, because the trend shown by these charts is only going to pick up steam.

Which means our buying power will go through the roof over the coming years.