The History of All Human Population

Here it is probably the best animation we have seen on human mankind! This shows that for every million people on Earth, there was a single dot on a map.

In total, that would be about 7,600 dots – representing today’s global population of 7.6 billion.

But, what if we went back in time, and watched those dots accumulate over human history? When and where do the first dots appear, and when does population growth ramp up to get to the billions of people that are alive today?

THE HISTORY OF POPULATION GROWTH

Today’s animation comes from the American Museum of Natural History, and it shows over 200,000 years of population growth and the major events along the way.

If you consider yourself on the more impatient side of things, we suggest starting at 1:50 which will zoom you to 400 AD – the time of India’s Golden Age. Alternatively, go to 3:25 to witness the Bubonic Plague’s rare negative impact on population growth, as well as the ensuing age of European exploration.

It took 200,000 years of human history to get to one billion people – and just 200 years to reach seven billion.

That’s partly how the exponential “hockey stick” growth curve works, but it is also a factor of improvements in living standards, sanitation, and medicine that came after the Industrial Revolution.

Here are a few moments that stood out to us in the video, that we think represent particularly interesting moments in human population history:

The impact of farming cannot be emphasized enough. For many thousands of years, the human population dwindled until we learned how to plant crops to provide a scalable and sustainable food supply for a hungry population. 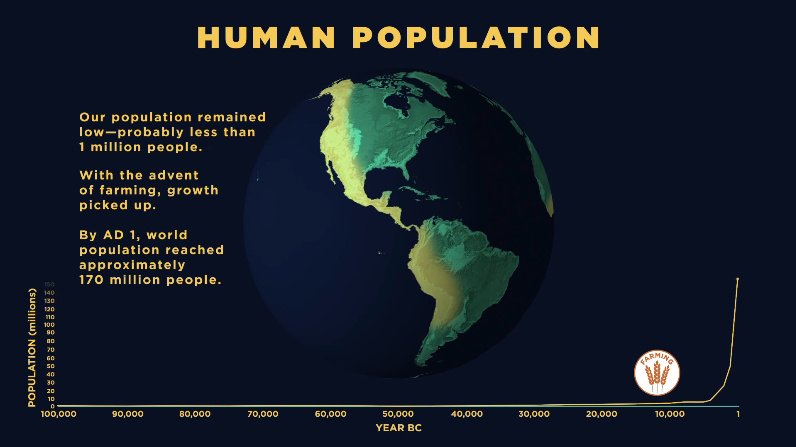 As you can see, after agriculture starts spreading, the human population quickly skyrockets. It is estimated to have reached roughly 170 million by the year 1 AD.

The Greeks and Romans were interesting cultures to us in many ways – but one thing that is sometimes missed with a Western education is the sheer size of Indian and Chinese civilizations. 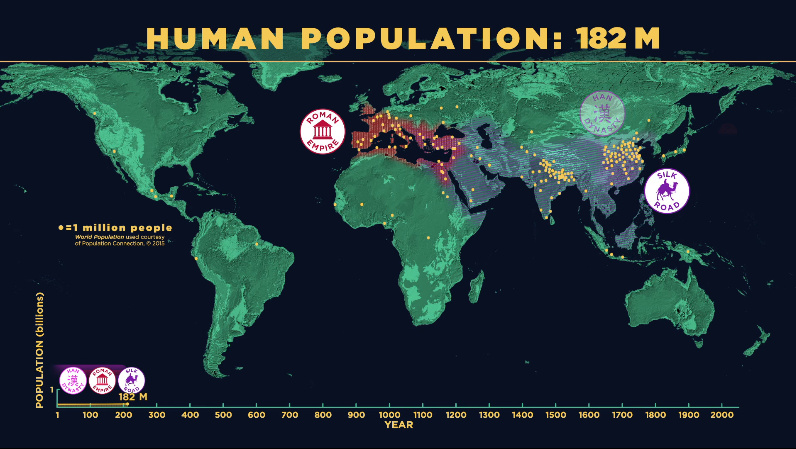 The above screenshot is from close to the territorial peak of the Roman Empire – notice its size in comparison to the Han Dynasty in China, as well as the area that is modern-day India.

The Black Death, which started in 1347, didn’t do much to increase Europe’s population. 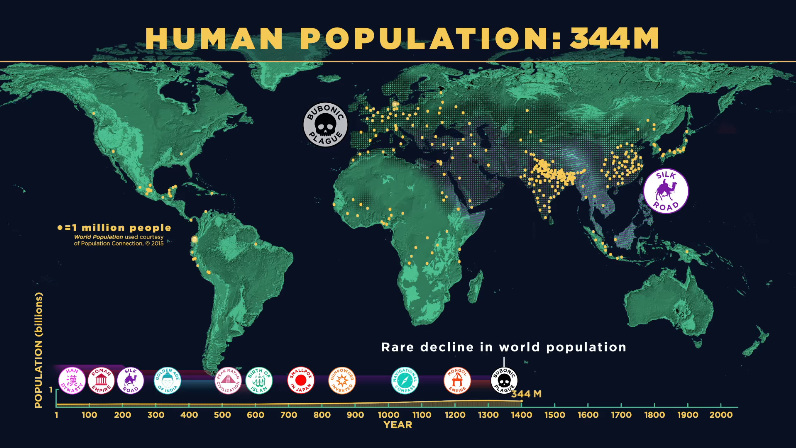 In fact, this was one of the rare times that global human population growth went backwards for multiple decades.

The Industrial Revolution brought innovations to food and medicine and kickstarted an era that would be the usher in the birth of many new technologies.

This screenshot is from close to 1900 when these innovations started to make rapid global population growth a reality. 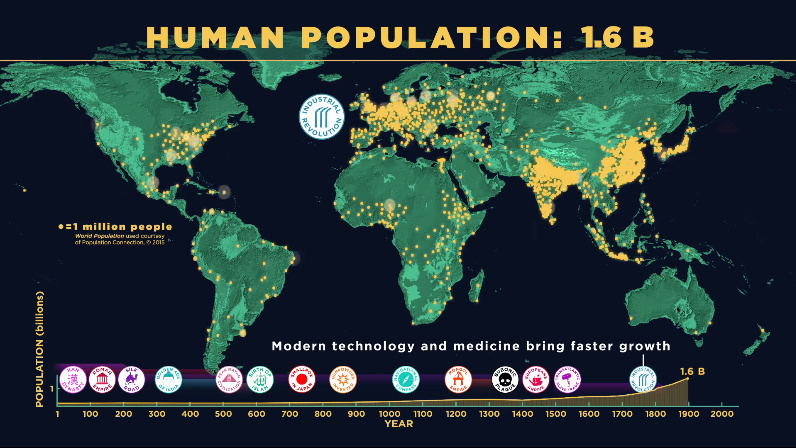 Over the next century, the population would more than quadruple to today’s seven billion plus people.

THE FUTURE OF POPULATION GROWTH

Naturally, this leads to thinking about the future of the human population.

For that, we recommend visiting these two prior animations: The 20 Most Populous Megacities in 2100 and The World’s Population by Region in 2100.