The Japanese IP Index: Central Bank Futility Summed Up in One Chart

When sovereign economic numbers (which may already be subject to significant governmental ‘massaging’) indicate something, anything, is headed in the right direction, the current administration is quick to take credit and emphasize how important that trend is.

The rest of the time? They haul out a timeworn “I’m With Stupid” sign that has an arrow pointing to whoever used to be in charge.

Such is the intensity and reliability with which positive numbers are hyped, it makes an objective policy appraisal (let alone admission that something just isn’t working) the rarest unicorn of all in the current geopolitical and economic climate.

For almost all of Japan’s post-crisis experience its IP Index, 99.97% composed of manufacturing output, has been contracting. The positives are far fewer than the negatives. They correspond easily with these obvious “reflation” episodes we find all over the world created by the abatement of destructive eurodollar impulses unleashed in intermittent fashion (nothing goes in a straight line). 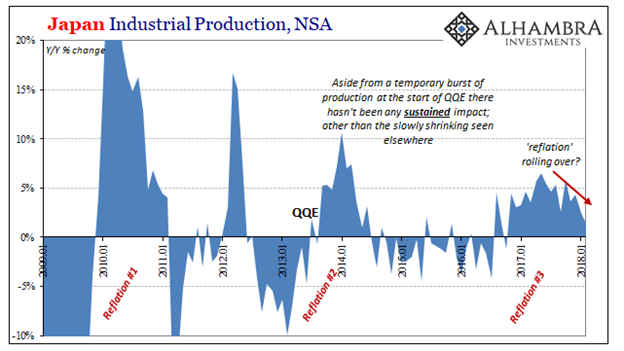 Therefore, Industrial Production in Japan just may be the best “reflation” indicator there is anywhere in the world. If that is the case, and it’s hard to argue otherwise, a potential rollover in it starting in the middle of last year would be quite concerning as it stands starkly against both inflation hysteria and “globally synchronized growth.”

It also represents global economic shrinking and how this has been mischaracterized repeatedly over the last decade. There is no growth trajectory indicated anywhere in the industrial figures, an important description of the global economy rather than just Japan’s experience with its own “deflationary mindset.” Throughout all of it, IP swings from positive to negative and back again without ever moving out of that position; despite the passage of so much time even at these occasional peaks IP is always considerably below the prior 2008 peak.

Yet, despite three almost complete swings since then, every time it turns positive it is paraded around the world as irrefutable proof the Bank of Japan, therefore QQE, therefore technocratic central banking, is a complete and total success. The problem with that is not mere interpretation. These mistaken impressions, often offered intentionally, greatly diminish the urgency to actually do something about the greater economic problem (while at the same time clouding the economic situation in the first place).

And that problem is the Bank of Japan; Japan hasn’t spent the last three decades struggling with its economy so much as trying to deal with an over-aggressive central bank that is actually powerless to fix the problem (as they understand it). We can relate. This is how Japan’s single Lost Decade has turned to three, and how what was once believed to be a Japanese coincidence has become a global one (with the global economy working on its second lost decade).

An upturn is not unexpected, nor is it a recovery. The world desperately needs the latter, having experienced (three times) only the former. Japanese Industrial Production may be the best example of all of it.

ORIGINAL SOURCE: The Best ‘Reflation’ Indicator May Be Japanese by Jeffrey P. Snider at Alhambra Partners on 4/2/18