It’s not just the Reddit crowd or the Short Squeeze movement.

A big change is underway with silver demand, one that is structural in nature. It will last years, perhaps decades. This built-in demand is likely to put an ever-growing strain on supply, and it will affect you as both a consumer and an investor.

What am I referring to?

Research shows that demand from both of these sectors is about to grow substantially. This is partly due to a widespread attempt to incorporate more green technologies into society, but it’s also because more silver metal is used in green technologies than conventional ones. Not only that, it’s cheaper and more effective.

Here’s what the latest data show. Check out how you will be impacted as both a consumer and an investor…

The jump was so big that an analyst at InvestorIntel.com said:

Numerous consultancies report EV sales are going nowhere but up. BloombergNEF forecasts global EV sales will surge 60% this year, while IHS Markit predicts a 70% rise. These are huge increases within a 12-month period.

This is what the projected growth looks like for EV and Hybrid vehicles. 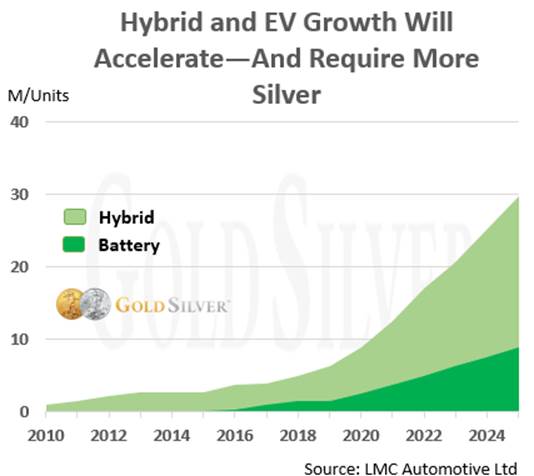 The push is on. And it’s caused many of the big carmakers to pick up their game:

This is all significant because EVs use almost twice as much silver as an ICE  vehicle. Hybrids use about 22% more silver.

Because EV and Hybrids use more silver, demand for this use will rise. Here’s what Metals Focus projects will be the amount of silver used in the automotive sector over the coming years. 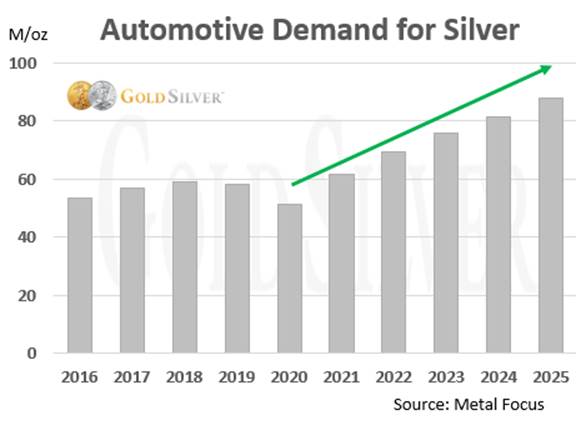 It’s only going to rise. Every year.

But that projection is almost certainly too low. That’s because it was made in Q4 last year—and December was a record month for EV sales, already surpassing what they had estimated for 2020.

That’s not the only reason. Researchers at Samsung have just discovered they can sidestep the undesirable side effects of a lithium battery—mostly safety and lifespan issues—by using a silver-carbon composite layer. This is a new use for silver that wasn’t known just a few short months ago.

The discovery at Samsung begs the question: What other uses for silver have yet to be discovered? It seems axiomatic to conclude that silver’s incredible uniqueness and versatility will lead to even greater applications in green technologies—which will push demand even higher than current projections.

The conclusion here is clear: demand for silver from the automotive industry is on the cusp of surging. And it is a long-term trend.

Photovoltaic use is growing more rapidly than most people are aware.

This graphic shows how widespread solar use has become in just the past 10 years. 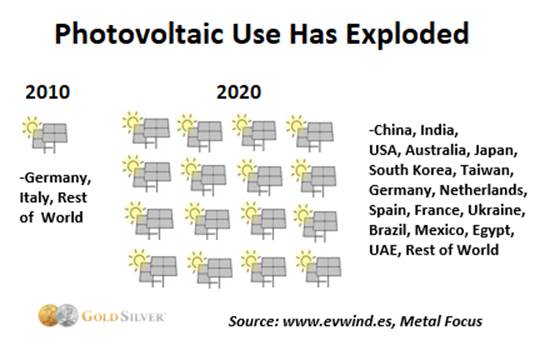 Most advanced economies and many emerging countries have discovered the benefits of using solar to produce renewable energy.

There’s another trend that will make solar continue to grow. It’s cheaper.

This graphic shows the increase in the number of solar installations globally, but just as important how dramatically costs have fallen. 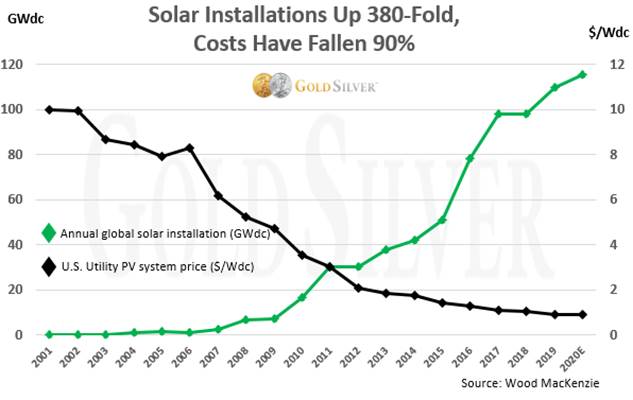 In other words, not only has solar use surged, it’s become very inexpensive to install.

This has obvious appeal to governments and consumers, and underscores that fact that solar demand will continue to rise—which means silver demand for this sector will also rise.

Demand for silver from the automotive and solar sectors is going nowhere but up. Broad use of silver in many other capacities—including ones yet to be discovered—will only add to the demand coming from literally thousands of industrial users.

This is fine as long as new supply can keep up. But that’s the problem…

Data is starting to come in regarding global mine output from 2020. This is still preliminary, so there will likely be minor changes to the final numbers, but this is what consultancy Metals Focus estimates the silver mining industry produced last year, as well as the prior decade. 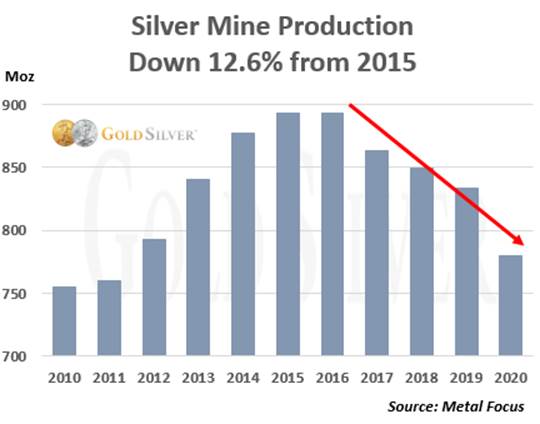 A 12.6% drop in four years is a big decline for a key industrial metal. And this is a global trend.

On top of this I can also tell you that global mine reserves are falling… that average grades are lower… and that there has been less exploration, development and expansion of silver deposits over the past 8+ years. The perpetually low silver price forced many miners to reduce exploration budgets. This is why global output is falling—if you spend less looking for silver, you find less silver! (This is equally true for gold producers, but the problem is more glaring in the silver space.)

It also explains why this is a structural problem; the sector can’t flip a switch and presto!, produce more metal. It takes many years and millions of dollars to ramp things back up again.

The chart actually hints at that fact… the silver price peaked in 2011, and yet you see that global output didn’t really rise until after that peak. That’s because there’s typically a lag between prices and production… a lot of the new investment was made when prices were high and budgets were flush with cash, and it led to greater output for several years.

Well, that same lag is in effect now: when the silver price rises it will take years before investment in the industry will translate into meaningfully higher output.

This all hints at a possible supply/demand crunch for silver.

Is that really in silver’s future? Time will tell, and it’s not the reason we own the metal, but that possibility is certainly setting up right now. And it will only get stronger over the next few years.

You don’t need me to tell you what could happen to the silver price if a supply squeeze hits the industry. Green technology is wonderful for society, but…

If you don’t have the amount of silver bullion you want, I encourage you to not let the current price weakness deter you. Consider looking at it like I do: an invitation, a sale price on real money whose value is headed much, much higher over the next few years.

If There’s a Recession Coming, Not Even the Fed Could Stop It Now: Barron's
More News