UPDATE: Once Silver Starts to Rock & Roll, Here’s What Its Volatility Could Look Like

Last week wasn’t much fun for silver. While prices initially rose when markets started to crash, the relentless downward pressure from the waterfall selloff in stocks led to some forced selling.

This week the opposite appears to be true. Silver is up over 5% as I write.

Volatility is back. If you’ve been a silver investor, you’re no stranger it. Swings in prices are the norm—it just doesn’t take much cash flooding in (or out) of this teeny tiny market to impact the price.

And while we don’t know if this downtrend will continue, history gives us clues about what’s ultimately ahead.

It might be a rocky ride, but once prices shift to a decisive uptrend, the upward volatility could be breathtaking.

And highly lucrative for those who own silver today.

First, let’s look at both gold and silver’s current level of volatility.

Here’s their daily gain and loss over the past five years, through Friday February 28. 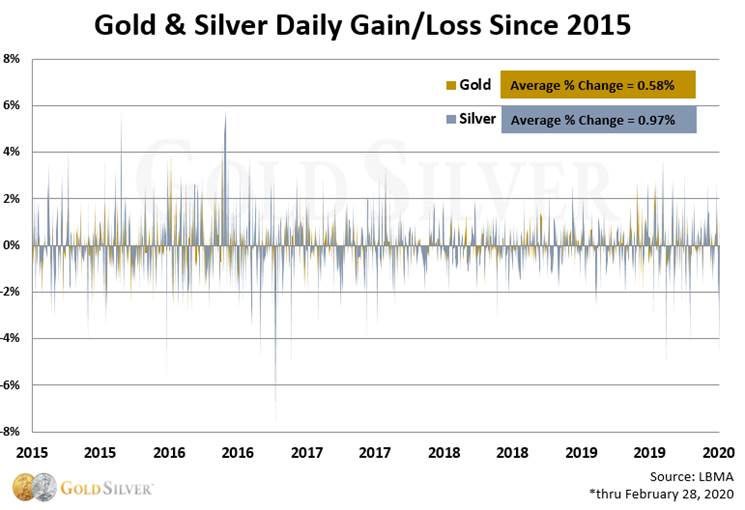 Gold’s daily volatility—whether the price went up or down—has averaged 0.58% since 2015. Not surprisingly, silver’s daily move was greater, averaging 0.97%.

Over this five-year period, the silver price has moved a greater percentage than gold 71.5% of the time. Gold’s daily moves were thus bigger 28.5% of the time. And while the two metals usually move in the same direction each day, there are obviously exceptions.

Exceptions aside, it’s no surprise to our readership that silver has been more volatile than gold. And it is this volatility that you and I will take advantage of.

So, when precious metals market really starts to ratchet up, what kind of levels might we see?

The best example comes from what has been, so far, the greatest precious metals bull market in modern history.

The following chart shows the daily price movements of gold and silver from January 1971 through December 1980. 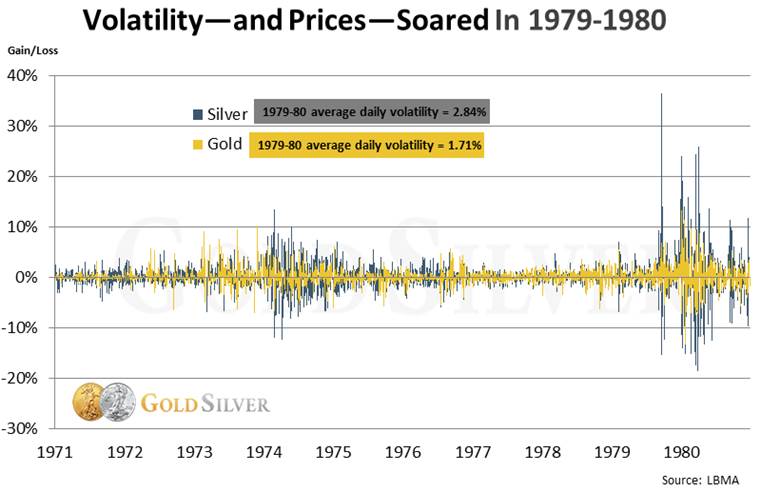 The chart is a tad crowded, but as it shows, the average daily price move in gold in 1979-80 was 1.71%. But silver averaged 2.84%, almost three times what it is now. And while there were some big down days, much of that volatility was to the upside.

In fact, in that final year of the mania, there were:

Here’s another compelling fact. When the market entered the mania, silver's volatility increased at a more rapid pace than gold’s. From 1979 through the end of 1980, silver outperformed gold by an average of 2.4 percentage points, almost double what it did before the mania set in.

Heck, even in 2011, when silver spiked to $49, the average daily volatility was 2.64%, more than double what it is now. And of course, most of the volatility was to the upside.

So yes, once the silver market gets rocking we will see some very big price moves. It’s a small market, as you know, so it doesn’t take much cash pouring in to affect its price.

So buckle up, and don’t lose sight of the big picture when silver swings up and down. There will be plenty of fun days ahead when it soars, but don’t let yourself get shaken out on the down days. Not until Mike says he’s getting ready to sell.

By the way, the gold/silver ratio, as I write, is over 95 again. The window to buy silver at such an extreme discount to gold is still open. History says it won’t be forever. Even a simple reversion to the mean will see silver dramatically outperform gold.

The future will indeed be very fun for those of us that have meaningful exposure to silver. In preparation, Mike and I and many others here at GoldSilver continue to accumulate physical metal.

Here’s what I just bought.