What is a Troy Ounce?

The metric system, or International System of Units (SI), is widely used throughout the world. However, the troy ounce, the standard unit of weights for precious metals like gold and silver, is neither part of the metric system nor the “imperial” system used in the U.S.

What is a troy ounce, and how is it different than the traditional ounce used in America?

The Troy Ounce vs. Traditional Ounce

The troy ounce is the standard unit used to weigh precious metals like gold and silver.

A troy ounce, when converted into grams, is equal to 31.103 grams, which makes it heavier and therefore worth more than the traditional ounce, equal to 28.349 grams.

A troy ounce is approximately 10% heavier than a regular ounce. An avoirdupois ounce, or traditional ounce, can be converted into a troy ounce by simply dividing it by 0.91.

For every troy pound, there are only 12 troy ounces, making a troy pound lighter than a regular pound, which is 16 ounces. It can be confusing when converting between ounces and pounds, but each system has its own standards.

The beginning of the troy weight and measurement system is believed to have originated in the French town of Troyes, where English merchants came to trade and barter. They adopted a standardized system of measurements to make commerce easier.

Several traits of this system can also be traced back to the Roman monetary system, where Romans used bronze bars as currency. One heavy bronze bar, called “aes grave”, was equal to 1 pound. The currency was divisible into 12 one-ounce units, called “uncias”, which led to the 12-troy-ounce pound.

The troy weight system was used in many parts of Europe before the metric system. The troy ounce had been used in England since the 1400s and it was adopted officially in 1527. 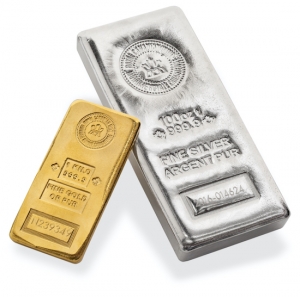 Thankfully, all gold prices and silver prices are calculated in troy ounces.

Having a universal unit of measure when dealing with precious metals is part of what makes gold and silver so liquid. Investors around the world buy and sell gold and silver using the troy ounce system, so there is no need for any other system of measure or conversion standard.

Knowing gold and silver use the troy ounce system is one of the first steps in understanding gold and silver investing. Check out our diverse selection of gold and silver bullion to start your portfolio today. You’ll see that all of our precious metals are calculated in troy ounces so that you get your money’s worth, whether you buy from us or sell to us.