Investing in Platinum or Palladium? [Read This First]

Platinum and palladium are both precious metals, just like gold and silver, because their occurrence in the earth’s crust is rare.

In fact, platinum is actually more rare than gold.

So why doesn’t GoldSilver sell them?

It has to do with their uses, and their status as a safe haven. Here’s what you need to know before investing in these metals…

Are Platinum and Palladium “Investment” Metals?

Platinum (Pt) and palladium (Pd) are part of the Platinum Group Metals (PGMs). They’re both silvery in color; in fact, platinum’s name is derived from the Spanish term platina, which means “little silver.”

Given their unique chemical makeup, these metals are used almost exclusively in industrial applications, particularly in catalytic converters to reduce pollution from vehicles. Platinum is more often used in diesel engines, while palladium is used more in gasoline engines.

Just how much of the PGMs goes to industrial uses? Here’s a breakdown of the most common commodities, including all four precious metals. 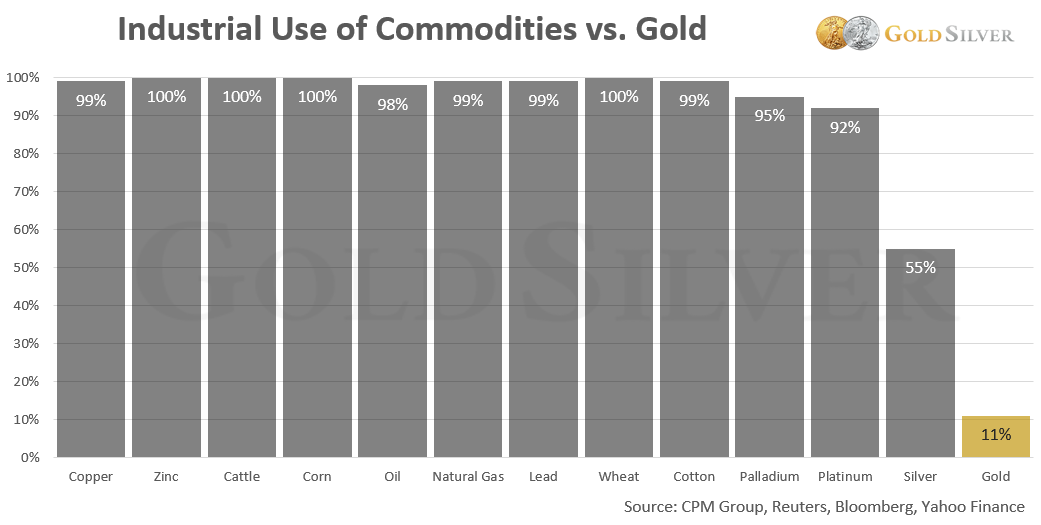 These percentages fluctuate slightly each year, but the bottom line is that almost all of the platinum and palladium dug up every year is used in industrial applications.

And while the use of catalytic converters won’t disappear anytime soon, the long-term picture is dreary. Electric vehicles don’t require a catalytic converter, because they don’t produce any emissions (hybrid vehicles do use PGMs, about as much as an internal combustion engine). Palladium is especially vulnerable; since a recent supply crunch led to a spike in its price, analysts say autocatalysts will increasingly substitute it with platinum.

As you might guess, with industry gobbling the bulk of PGMs, very little goes toward actual investment. 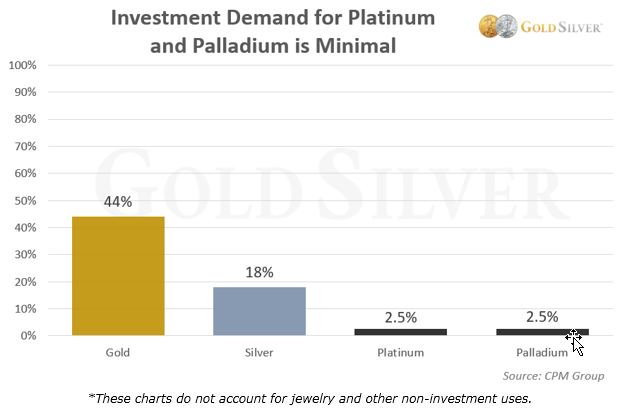 Only roughly 2.5% of platinum and palladium goes toward investment.

In fact, investment demand—both bullion and ETF holdings—has been in decline for a number of years now.

PGM prices do respond to supply and demand forces. And since investment is so small, it can influence their prices if demand spikes. In the big picture, though, investment demand is widely expected to remain a tiny part of PGMs.

Gold, on the other hand, is money, pure and simple. It is mankind’s ultimate safe haven.

That accounts for why gold is the only precious metal held by central banks. 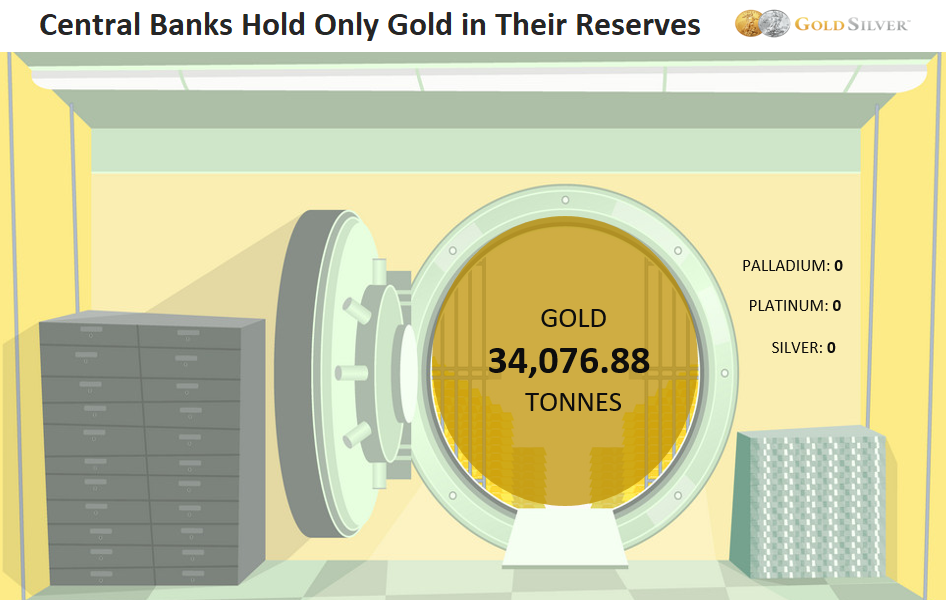 Yes, silver is a monetary metal, too, despite its high industrial use. History clearly shows it has not only been used as actual circulating currency but has responded well in crises, particularly inflationary ones (though industrial demand and economic health can affect its price).

The bottom line for platinum and palladium is that they are not viewed as monetary metals by global central banks, and carry little appeal to investors.

But even though investment demand is minimal for PGMs, could they still perform well during a period of crisis? Let’s see…

Should You Invest in Platinum and Palladium?

The biggest crises an investor faces are recessions and stock market crashes. Let’s take a look at how these metals respond to those events and if they are hedge for your portfolio.

First up, recessions. There have been seven official recessions in the US since 1970. Here’s how the platinum price has performed during each of those economic downturns. 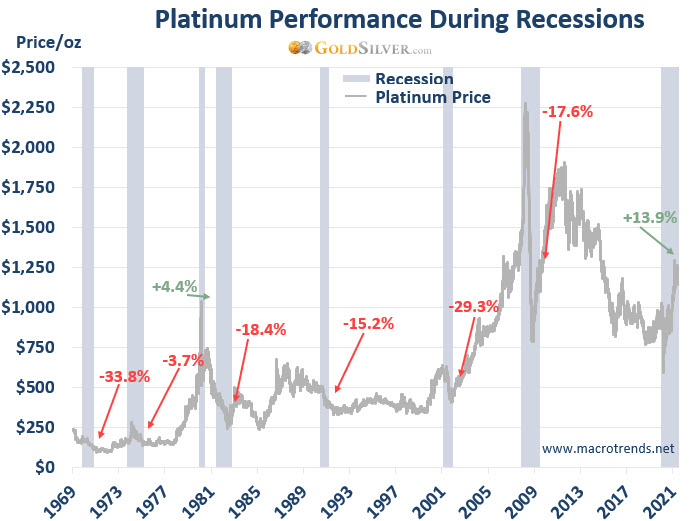 The platinum price has clearly suffered during recessionary periods. It fell in all but one, and in most cases by double digits.

This goes back to its use; investors know the vast majority of platinum is used in industrial applications, so if the economy is shrinking, demand for the metal will naturally fall and the price sell off.

Here’s how palladium has performed during the same recessions. 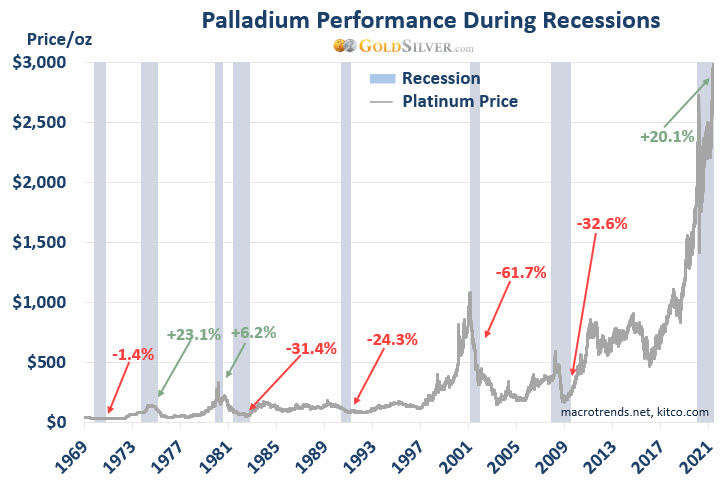 The palladium price fell in five of the seven recessions, rising modestly in one and by double digits in 1974. Still, this presents a weak case as a safe haven asset during recessions.

Contrast those recession hedges with gold. 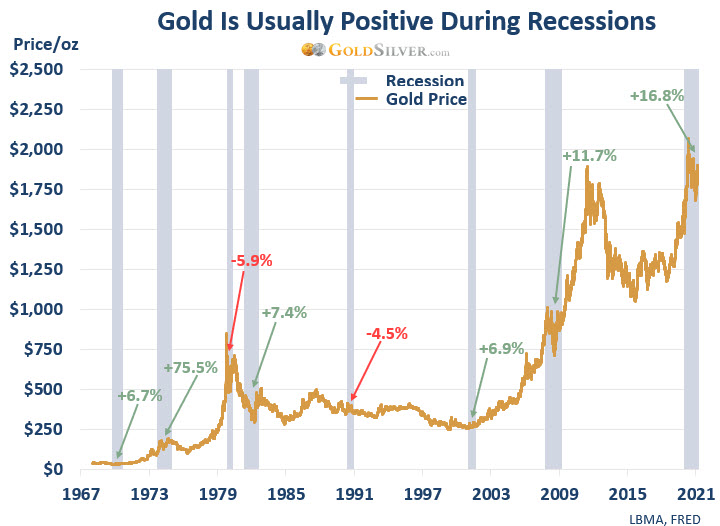 The gold price rose in five of seven recessions, was flat in one, and down by single digits in another.

This makes sense when you think about it. Economic uncertainty and investor worry climbs during recessions, the kind of environment gold thrives in.

Next up, how have platinum and palladium performed during stock market crashes? This is particularly important now, since by any measure stocks are overvalued.

This table looks at the eight biggest declines in the S&P 500 since the mid-1970s, and measures how the four precious metals performed during each. Notice all the red with platinum and palladium, and in contrast all the green with gold. 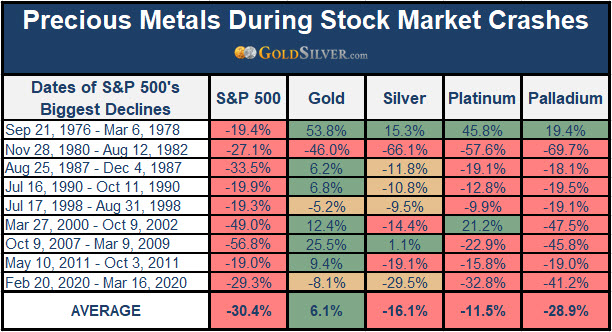 On average, gold is the only metal that has usually risen during the worst stock market crashes, while palladium and platinum fall, sometimes acutely.

How likely are PGMs to hedge your investment portfolio during a stock market crash? History says not very likely at all.

We don’t offer platinum and palladium because they’re not monetary metals, have not protected investors during recessions or stock market crashes, and because their uses are overwhelmingly industrial.

Bottom line, platinum and palladium have never been viewed as money, and they're not money now. When there's a currency crisis, people don't run to PGMs.

We’re convinced investors will flock to gold and silver in the coming crisis, the ultimate forms of sound money and the last resort for a safe haven.

That’s why we continue to accumulate physical gold and physical silver—history says they’re likely to experience one of the biggest rushes ever seen.