Why the Collapse of Bear Stearns Changed the Silver Market Forever

Very few people know exactly what was said, promised, discovered, obfuscated, threatened, etc. in the dark and high-tension days surrounding the collapse of Bear Stearns and its taxpayer-subsidized subsequent digestion by JPMorgan.

What is irrefutable is that JPMorgan inherited Bear’s enormous and disastrous short silver position. How they would deal with it in response has fundamentally altered the silver market, while simultaneously setting it up for a historic rally. 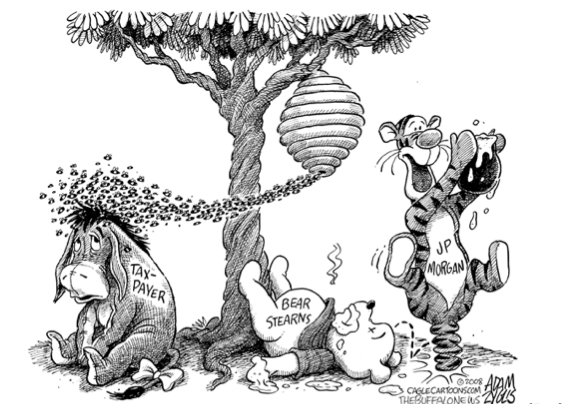 Bear Stearns’ failure coincided, to the day, with gold hitting all-time highs (over $1000) and silver hitting 30 year highs ($21). It’s easy to calculate that Bear lost more than $2 billion in being short gold and silver from yearend 2007 to mid-March 2008.

The discovery, in September 2008, that JPMorgan was now the largest short seller in COMEX gold and silver made it clear that the CFTC lied in its previous public letters denying there was no problem with big shorts in the silver market.

Only after JPMorgan bought enough physical silver by 2012 to 2013 to cover Bear Stearns’ former COMEX paper short position, did it realize it didn’t have to stop accumulating metal as a defensive measure; but that it had the means, motive and opportunity to turn what was a highly defensive original motive into a highly offensive one in terms of an unprecedented pure money-making opportunity.

Why else would JPMorgan, perhaps the purest example of a profit-making machine, go on to buy 700 million ounces of physical silver, if not to profit? Not that it may matter much when JPMorgan switched from defense to offense, but none of this would have probably occurred had JPMorgan not taken over Bear Stearns. That’s why I feel the takeover is the most important development in the modern history of silver.

ORIGINAL SOURCE: Bear Stearns – A Different Opinion by Theodore Butler at SilverSeek on 3/20/18