Without Federal Debt Spending, GDP Would Be Shrinking Every Year

It’s difficult to wrap your head around this reality: For all the vaunted talk about economic health and growth and employment and all the rest, the economy would not be growing at all, would be shrinking, if not for federal debt spending.

And such a situation (which is free market reality) would cause all sorts of dire warnings and proclamations of recessionary doom. Honestly, how long can the government keep this fiat-money spending spree going? How long until they can’t sell worthless treasuries to anyone?

As of the latest Treasury update showing federal debt as of Wednesday, February 15...federal debt (red line below) jumped by an additional $50 billion from the previous day to $20.76 trillion. This is an increase of $266 billion essentially since the most recent debt ceiling passage. Of course, this isn't helping the debt to GDP ratio (blue line below) at 105%. 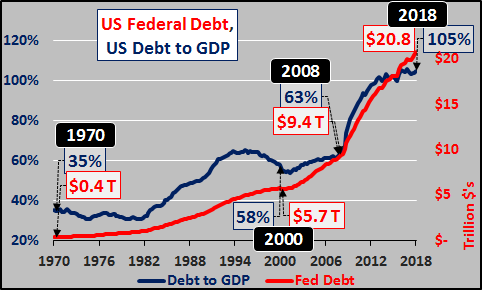 But here's the problem. In order for the American economy to register growth, as measured by GDP (the annual change in total value of all goods produced and services provided in the US), that growth is now based solely upon the growth in federal debt. Without the federal deficit spending, the economy would be shrinking. 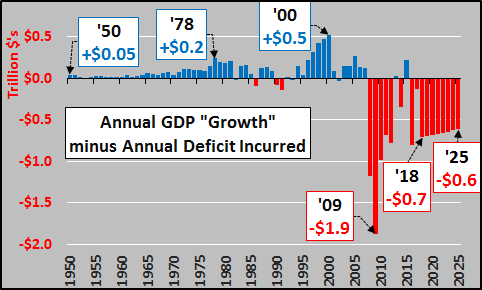 The domestic public currently holds about $6 trillion in Treasury debt and will need to buy in excess of $1.5 trillion annually (indefinitely) between picking up the roll off and the new issuance.  If the public "willingly" do this at low interest rates, it will represent 7.5% of GDP going toward Treasury purchases that yield well below needed returns.

If the Public won't do this "willingly", interest rates will soar far more than shown above and the US will be overwhelmed by debt service.  The only other option is that the Federal Reserve makes a U-turn to re-start QE and openly engage in endless monetization.

ORIGINAL SOURCE: Who Is It That Wants to Buy Trillions of US Treasury's??? by Chris Hamilton at Economica on 2/21/18