So 2017 was just a banner year in the markets. The poor laggard S&P 500 only gained 19%, outpaced by the mighty Dow’s 25% and the Nasdaq’s 28%. Everything roaring on all cylinders. Good news is great news, bad news is great news.

So during this goldilocks year, how did out US government fare as a business in its 2017 Fiscal Year Financial Report? 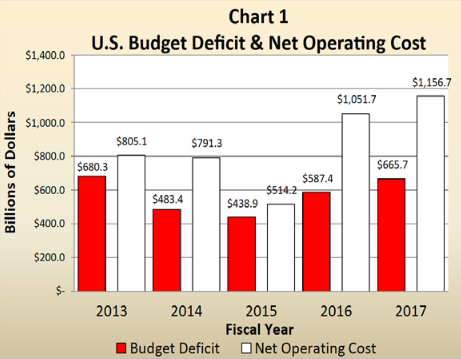 Here’s a summary of the salient data points of the FY 2017 Financial Report of the U.S. Government (full PDF).

Risibly, even these miserable statistics paint a fictitious and unrealistically rosy picture. Because for the twentieth straight report, the Government Accountability Office explained that the report was incomplete, inaccurate, and pretty much worthless.

The GAO {Government Accountability Office] delivered another disclaimer of opinion on the government-wide financial statements. This was the 20th consecutive year for what is effectively a flunk on your audit. GAO cited material weaknesses in “accounting for intergovernmental activity,” an “ineffective consolidation process,” and “serious financial management problems at the Department of Defense” that prevent the statements from being auditable.

ORIGINAL SOURCE: US Treasury Posts Gigantic $1.16 Trillion Shortfall in Fiscal 2017, Hilariously Points out “Where We Are Headed” by Wolf Richter at Wolf Street on 2/19/18