Some people in Britain are waking up to just such a deal, in the wake of the collapse of the British Pound following the summer’s “Brexit” vote.

But wait… hasn’t the British Pound cratered and actually made things more expensive? Yes—if your savings were entirely in pounds.

Those Britons who took smart steps to preserve their purchasing power, however, haven’t suffered. In fact, many of them are finding some sweet deals.

It’s a lesson that will sooner or later apply to all of us: when a government (or a referendum, in this case) makes a bad move, the value of the currency in your bank account can fall fast. We’ve seen this a hundred times the world over; eventually it’s caught up to every country and every currency.

Time again, gold and silver owners, however, have seen their standard of living not just preserved but actually grow.

Indeed, the pound in international markets has fallen through the floor, particularly after Brexit passed. It thus takes more currency to buy the same products and services.

But not if you’re using gold. We all know gold has had a good year, but look how it’s performed when priced in British pounds versus in US dollars. 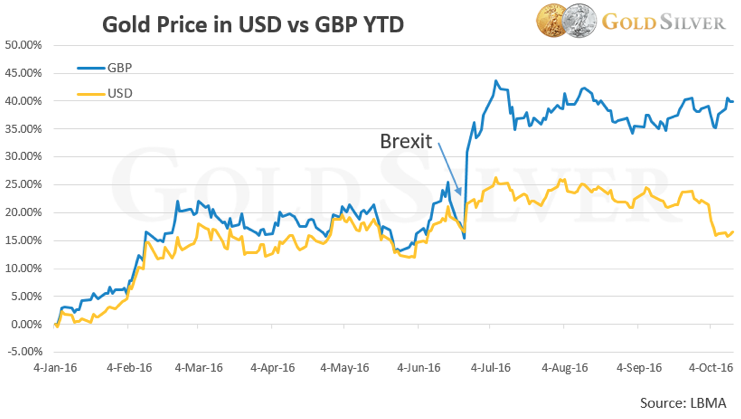 Gold priced in pounds is up a whopping 40% year-to-date. That means their gold proceeds go a lot further than they did when the year started. Their purchasing power has increased—while that of their fellow citizens has fallen hard.

This is more practical than you may realize. Here’s that BMW 320i priced in the Great Britain pound, and in gold ounces… 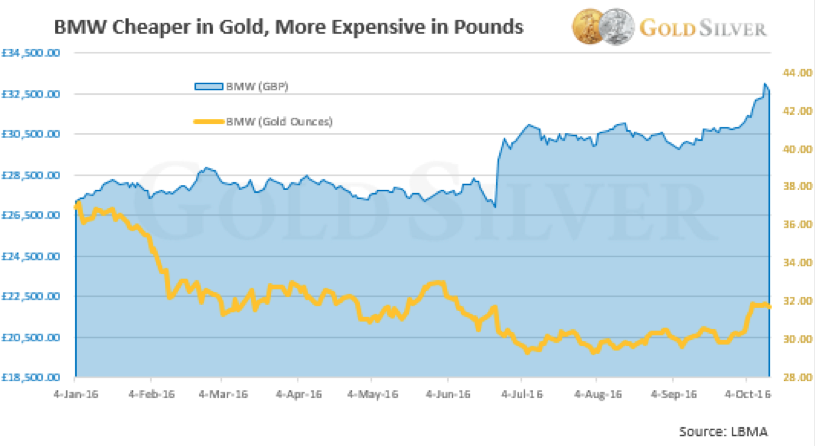 This is by no means an isolated example. The same thing happened two years ago to the Canadian dollar. Over an 18-month period in 2014 and the first half of 2015, the “loonie” fell a whopping 25%! This also involved no crisis—it was just over a scare of slower growth.

Both of these examples are from advanced economies. They weren’t the work of some third-world dictator or socialist regime. Not only can this happen to any developed country, the entire world will be impacted when the dollar begins its final descent:

When the US dollar goes, every standard of living around the globe will be impacted.

Are you ready? Because it’s about a lot more than fancy cars or getting rich...

Mike and I are convinced that physical gold and silver owners will see their lifestyles advance in the next wealth transfer. But in a crisis there will be a lot more pressing needs that deserve our attention. And gold and silver can help you deal with them, regardless of which country you live in or what currency you use.

Imagine what will happen to the cost of day-to-day items when the US dollar begins to earnestly lose value, ushering in a punishing inflation…

And what about the needs of people or organizations you care about?

In a societal crisis, you might need some of these things, too—if you can still afford them…

And the crisis could impact your life in other scary ways, too…

You undoubtedly can think of more things in your life that you might need to be financially prepared for. Consider how gold and silver could help you cope with each of these areas of your life.

I suggest we all continue to accumulate a meaningful amount of gold and silver bullion and be prepared for whatever comes our way. BMW or not.