Gold Forecast and Price Predictions from Wall Street – $2,000 (or higher) as Early as Next Year

With gold prices having broken out recently, many banks and analysts have released updated price projections. And in every case I’ve seen, those predictions are higher.

Yes, banks and brokerage houses are not the best source for analysis of the precious metals market—they’re heavily biased toward stocks, and their track record with gold has been notoriously wrong.

But it’s worth looking at what they’re saying, because their clients listen to them.

Institutions control billions of dollars, and as a result hold sway in the markets. Wall Street piles into trends, so if they see higher gold prices coming then widespread bullish predictions could serve as its own catalyst.

I put the banks that have recently released an updated gold price prediction into a chart. In most cases, it is an analyst at the bank making the prediction, not the bank itself. But since these are mostly analysts for the resource industry, their predictions are frequently used to make investment decisions for the institutional side of the firm, as well as to make recommendations to advisors who manage money for thousands of clients.

In some cases they don’t give a specific date or price, but here’s what these banks and analysts have publicly stated over the past couple weeks. 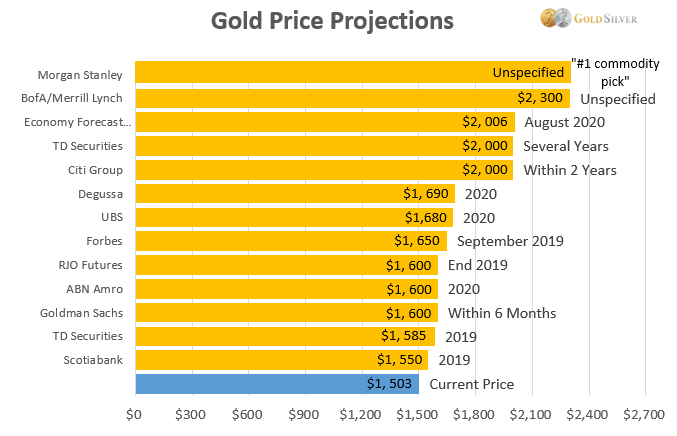 Every bank I found shows gold ending the year higher than where it’s at now.

You’ll also notice that Morgan Stanley’s “#1 commodity pick” is gold, something we haven’t seen from a bank in a long time.

Of course, this doesn’t mean any of them will be correct. And some banks and brokerages are not bullish. Like BMO Capital Markets chief investment strategist Brian Belski: “Caution is warranted when chasing extreme moves in the gold price, and the unpredictable nature of the U.S./China trade war makes timing very difficult in the current environment. While we agree a prolonged trade war can have real negative fundamental implications, we continue to believe the gold market is being driven more by swings in rhetoric and fear than actual fundamentals.”

Tsk, tsk, Brian. Gold is about a whole lot more than some temporary trade war. Yes, an agreement would temporarily weaken the gold price, but that’s a gnat on a Billy goat’s rump compared to the core economic and monetary issues facing the globe today. And an extreme move? Gold just now passed the S&P 500 for the year—was the S&P in an “extreme move” before then? Take a look at history, pal. We’ll see you back in the near future when gold is screaming higher from the fundamentals you think are missing. Hey, maybe you’ll be my customer, when it’s time for me to sell. Just be aware though, you’ll be paying a hefty premium then.

What prediction do I have? As I said in this interview, I think a $3,000 to $5,000 gold price is in the cards. I hope it’s not too much higher, given the kind of world that would imply, but bubbles always overshoot, and the kind of panic and fear we think is ahead could easily cause the gold price to go even higher.

But what I really like is Mike Maloney’s prediction:

It’s not about a specific price… but about protecting your portfolio and even your lifestyle against the kind of calamities ahead.

And yes, we think that will include enormous profits. Enough profits, in fact, that I hope you’ll be able to join me and Mike and everyone else at GoldSilver when I finally talk them into going on a gold and silver “victory” cruise with all our customers. (You can help me talk them into it with your comments below.)