As we outlined in our silver supply/demand crunch article, the silver market has entered a structural imbalance. It is not temporary. Global supply is locked into a decline, leaving the industry ill-equipped to respond meaningfully to any spike in demand of physical metal for the foreseeable future.

Underpinning the erosion in supply is the deterioration in mine production. This is important, because most of the bullion you and I buy comes from newly-mined silver. Secondary sales (products that have been previously bought and sold) will always have a place in the bullion industry—and a growing role in a supply/demand crunch—but to be prepared for the kind of rush Mike Maloney see ahead, mine production will need to be healthy and rising.

It is neither of those things, as you’re about to see. Global mine production is caught in an intractable downward spiral, and the tiny sector of primary silver producers are stuck in an unhealthy quagmire. Worse, there’s no real end in sight.

This is both concerning and exciting. Here’s why…

Global silver supply fell last year due to a decline in both mine production and scrap supply. But the drop in mine supply was the primary contributor to the decline. And it’s the primary reason new supply will continue to fall.

Most industry consultancies predict that silver mine production will be lower again this year, and as a result drive total supply lower. If this plays out as most analysts expect, silver supply will fall to levels last seen in 2008.

Here’s what the annual change in mine supply looks like since 1951. 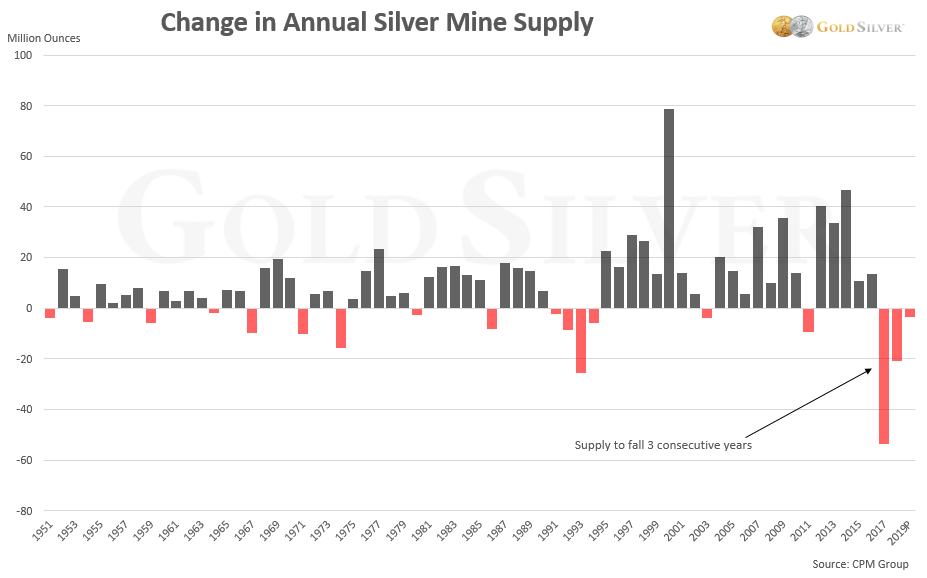 The current drop already outweighs anything we’ve ever seen in the past, including the four-year drop in the early ‘90s. Worse, no reputable analyst I know of is predicting that silver mine output will suddenly reverse and grow any time soon.

Why is this happening? Three reasons:

The ongoing weakness in the silver price has kick-started a chain reaction around the industry:

And then there’s one of my pet topics: high grading. It’s something most investors aren’t aware of, yet it has a direct impact on new supply…

Most deposits have both low and high grade ore, and what management teams usually do is mix the ore to get a more consistent grade running through the mill. When the silver price fell off a cliff, what do you suppose management teams did? Many of them began to mine just the high grade portion of their deposits. This allowed them to remain profitable at lower silver prices, but the net result was that it left behind low grade ore that in many cases is no longer economic. That’s because it required the high grade ore to be feasible, and now it’s gone. Much of this ore won’t be economic at higher silver prices either, and even then miners will be reluctant to take the expense to dig it up when it’s so low grade and thus less profitable.

This is all having an impact on the silver industry. To wit, less and less new metal is coming to market.

Here’s proof. Mine “capacity,” the amount of new metal expected to come online each year, has fallen off a cliff. 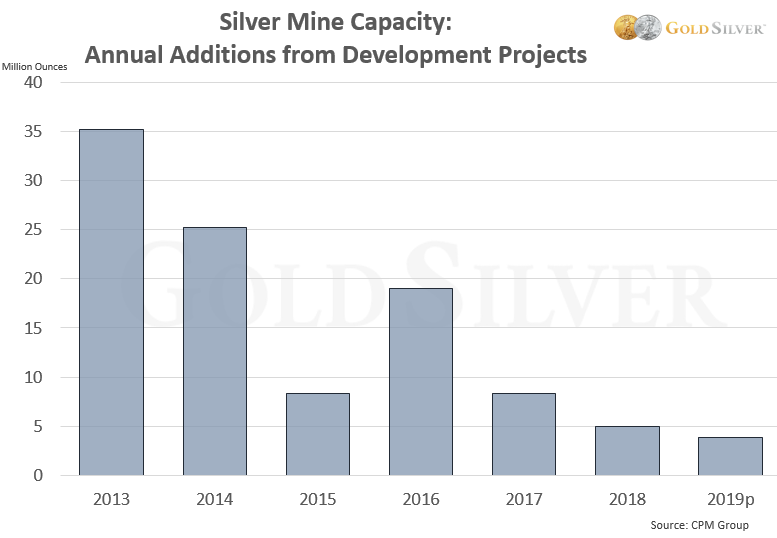 New silver mine production that came online last year was a paltry 4.9 million ounces, down an incredible 86% since 2013 and a stunning 43% lower than just one year earlier. You can see it’s expected to fall again this year, to just 3.5 million ounces. This is a staggering decline from one of the primary sources of new metal.

If that isn’t concerning enough, consider this sober fact:

The primary silver industry has been beaten down by a low silver price for six years now. It’s had a devastating impact. The portion of silver produced from primary silver mines represented just 29.8% of total silver mine output last year, the lowest percentage of total mine supply since 2009.

As bad as this is, the situation is even more troublesome…

To remain profitable—and have money to spend on exploration and development of more silver deposits—a company should lower their costs, right?

Yes, and that’s exactly what every silver (and gold) producer did. But you can only lower your costs so much. Most primary silver companies have now reached a point where they can’t meaningfully lower costs any further.

That’s a problem, because, on average, costs are already walking a fine line with the silver price… 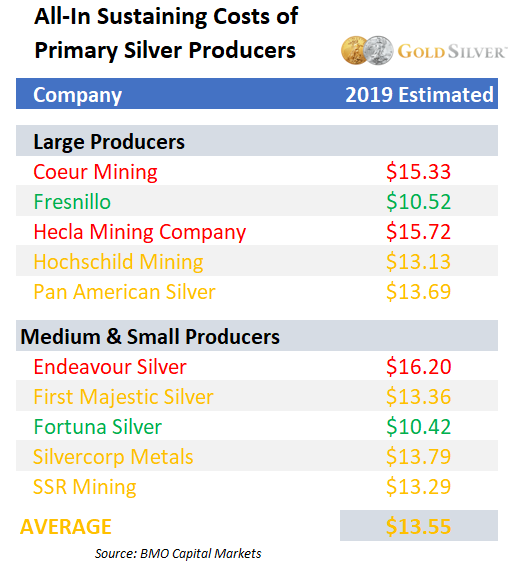 With silver at $14.78 as I type, three of the 10 primary silver producers lose money. Consider that this is after six years of cost-cutting initiatives. It’s not from a lack of trying; it’s that management teams can only do so much. If you want to stay in business you have to keep paying for labor, diesel, water, machinery, etc.

But it’s actually worse than this…

The table is a tad misleading because the all-in cost figure doesn’t actually include everything. It excludes:

Add in those items and the true total cost to run a mining company is higher than the figures shown in the table. That’s why some companies are highlighted in yellow.

Government to the Rescue!

Some in the US House of Representatives (both Republicans and Democrats) want to update the US Mining Law of 1872. They argue it was put in place 147 years ago to spur mineral exploration after the discovery of gold in California. That’s true. But their “update” wouldn’t be very fun for the mining industry…

The mainstream narrative claims the existing law doesn’t require mining companies to pay royalty fees or be “financially responsible” for cleaning up abandoned mines. The current House bill would thus institute an 8% to 12.5% royalty rate on mine production, add a reclamation fee to pay for mine cleanups, and give communities more control over the location of a new mine.

You can agree or disagree with those mandates, but as you can see in the table above…

Compared to other royalty rates around the world, those royalty rates are excessive, and could easily cripple silver miners operating in the US. It would make many new and existing operations unprofitable.

I’ll point out that a bill to make changes to the mining law has been introduced almost every year since 2007. But never say never; those royalties and fees will look very appealing in the next recession.

And not just higher prices, but sustainably higher prices. In other words, management teams will have to be convinced silver prices will stay high before they’ll invest millions and millions of dollars in new projects. They can’t lower costs much further, so this is the only realistic way to reverse the downtrend in mine supply, particularly from the primary silver producers.

I know a fair amount of silver mining executives. And I can tell you firsthand that while there’s a constant focus on replacing the ounces they produce, they are not about to pour seven-figure amounts of cash into a project unless they’re absolutely convinced—along with all the investors and bankers and funds and financiers backing these projects—that the silver price will be high enough, long enough, to make a profit for years and years to come.

Therein lies the problem. The silver price is just too low to solve the mine supply dilemma.

The only other possible solution is if they discover a high grade deposit that can produce metal at a much lower cost. But most companies aren’t looking for them. And if they did have the funds for a substantial exploration program, those deposits are fewer and fewer in number and harder and harder to find… or they’re located in increasingly hostile political environments… or environmental concerns take precedence… or they’re expensive to prove up. And in all cases they take years to develop. Turning a new project into a mine is the opposite of turning on a light switch; it’d be like you trying to build your own highway where none exists.

The bottom line is that the low silver price has caught up to the industry and is for the most part holding it hostage. Miners have been spending less and less looking for new deposits. They’re developing fewer and fewer new assets. Existing reserves and resources are depleting. And it’ll take lots of time and lots of money to turn it all around.

There’s no doubt silver supply is going to tighten further. So when the next spike in demand comes, and the mainstream realizes the industry can’t instantly produce more metal, what do you suppose happens to the silver price?

I’ll let you draw your own conclusion. But I’m with Mike on this: I’m buying more silver.