SLV is Stealing Earning Power from You! Here’s How

Do you own the “junk bond” fund of the silver industry?

You know, the fund that has numerous structural risks that could easily blow up in a crisis…

Concedes its share price may not always match the silver price…

And altered its prospectus in numerous ways in response to the silver short squeeze movement, all of which protect the fund and not investors?

As bad as all that is, there’s something else you need to know about SLV and other bullion ETFs…

It’s something few investors are aware of, but if you’re an investor who wants to maximize their profit you need to know.

Because it will, without a doubt, reduce how much you’ve earned by the time you sell…

Most investors are aware that ETFs charge a management fee, and this includes bullion funds. For SLV the “sponsor fee” is 0.5% per year.

We also charge a fee for storage, which is slightly higher. It covers storage, insurance, auditing and reporting. But with ours you have real metal, in your name, not theirs, and stored outside the banking system, not inside it.

But in reality, SLV offers less value. In the long run, you will earn less investing in it and other bullion ETFs. Here’s how…

SLV and its ilk deduct their fee by subtracting metal from your account. That’s why when you look up the price of SLV and GLD you’ll see it’s not at spot—not even close, actually. That’s because they’ve been reducing the amount of metal each year by selling some to pay themselves.

SLV began trading on April 28, 2006. Since then, they’ve deducted 0.5% of the metal that investors originally had exposure to in order to pay management fees. Every year.

So from 2006 to present, here’s how much metal exposure the investor has lost on a 1,000-share purchase, vs. a bullion holder that bought 1,000 of physical metal. 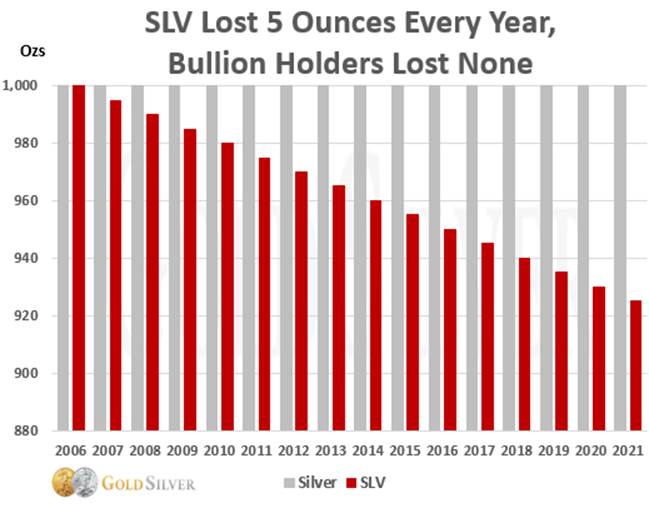 From 2006 to April of this year, the SLV investor has seen their exposure to silver reduced by 75 ounces on their 1,000-share investment!

But if you held physical silver you maintained exposure to your 1,000 ounces the entire time.

You might counter, “But Jeff, I had to pay GoldSilver storage fees, too.”

And that makes a big difference, because…

Gold and silver don’t pay dividends, but they still have earning power. And if you have more metal, you earn more—if you have less metal, you obviously earn less.

Here’s why that matters in a rising price environment…

For the investor who bought 1,000 shares in SLV last year, here’s how much less they would earn in this scenario, vs. what bullion holders would earn if they didn’t lose metal to fees and instead paid cash. 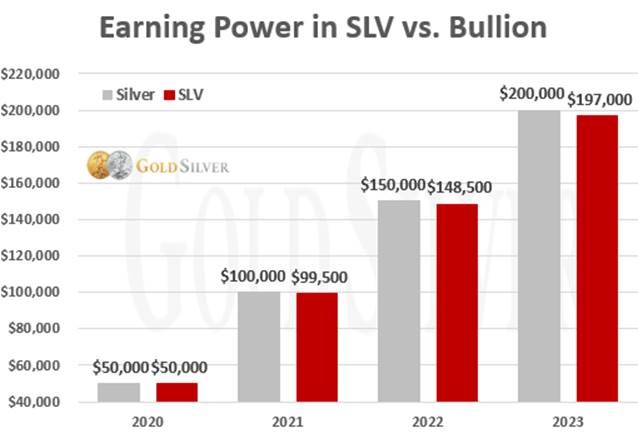 For those that might claim your net worth is still lower with bullion than SLV—after all, you pay a fee one way or the other—focus on earning power: the more silver you own, the more profit you’ll make in a rising price environment. Buying SLV locks you into earning less.

Do you want to earn more by the time you sell?

Then buy real silver, not some paper representation that pays itself by taking metal away from you. Assuming it’s even still functioning properly.

Secure your investment, and your earning power, by buying the real thing.

Commodity Bull Should Still Have 5-7 Years to Go

Persistent Inflation Is Going to Be More Problematic Than Everybody Thinks: Jim Bian...

A Nation of Imposters

Central Banks and Socialism Are Forever Linked Together

To Fix the Shipping Crisis, Start by Repealing the Jones Act

Americans Now Prefer Smaller Government, But May Not Get It
More News