Editor's Note: We thought it might be timely to reprint this May 2018 article from GoldSilver Senior Precious Metals Analyst Jeff Clark. In times of extreme market downside and volatility, the mainstream financial media will rush to attempt to convince you they have all the answers.

And many of them, heavily incentivized to promote the interests of mutual funds and other stock-buying entities, will draw some especially curious conclusions. Join Jeff as he explores an especially bizarre piece from Money Magazine that advises you to protect yourself from a crashing stock market... by loading up on stocks.

I was flying back from giving a presentation in Vancouver last week and browsed through the financial publications at an airport newsstand, scanning to see what passes as mainstream advice these days. I spotted Money Magazine’s May issue and saw an article titled “5 Ways to Invest if You’re Worried About a Crash.” My curiosity was piqued—surely they’ll mention gold… right?

I wasn’t holding my breath. This publication has been a wonderful contrary indicator for gold—an issue in December 2015 actually claimed Lego sets were a better investment than gold, for example, and it marked, almost to the day, the very bottom of the gold bear market and the perfect time to buy. I’m convinced this magazine will also give us a clear sell signal (“Buy Gold Now!” or some such headline) AFTER the price has already skyrocketed. I guess I should thank them ahead of time.

Anyway, I turned to the article and read the subtitle “Worried about how shaky stocks have become lately? These five investments can act like shock absorbers in a diversified portfolio.”

Okay, surely this has got to include something about gold. I know from past issues that they don’t like precious metals, but they can’t possibly ignore what history has shown.

I was wrong. Gold is not mentioned once. The closest they get is suggesting “commodities.” And their recommended pick in that category was for a natural resource fund, whose top 10 holdings include exactly zero exposure to precious metals.

As bad as that was, it’s what I read next that stunned me:

All four of their other recommendations were to—I’m not kidding—buy more stocks!

I actually laughed out loud; my seatmate glanced over at me, concerned about my sudden outburst.

Once I calmed down, I read through the full article. Here’s how they advise their readers to prepare for a stock market crash, along with, in their own words, how these categories performed during the last stock market crash. It’s very instructive, and I’ll understand if you can’t contain your laughter too…

Huh? I thought this article was about how to protect my portfolio in a crash? Maybe they need to look up the meaning of “shock absorber.”

I must be missing something here. I want to PRESERVE my retirement fund, not just be able to say I lost less than you. This is insulting.

Cheap stocks still decline significantly in a crash and only add to your equity losses. This is hardly a way to hedge—buying stocks in anticipation of a stock market crash is the opposite of a hedge.

Come on, this is advice from what my Grandma would call a nincompoop. Your portfolio is virtually guaranteed to lose money in the next crash if you follow their recommendations. I wanted to scream one of Will Ferrell’s best lines of all-time: “Doesn’t anybody else notice this—I feel like I’m taking crazy pills!”

But since they’re serious, I can’t resist taking a cheap shot…

How many editors at Money Magazine does it take to change a light bulb? Eleven. One to hold the bulb, and ten to turn the house.

Look, their four stock categories would theoretically lose less than sky-high-PE growth stocks, and in that sense would blunt another 2008-like crash. But losing a little bit less shouldn't be the goal. Even if these recommendations fall only 30% instead of 50%, your stock portfolio would still lose over a quarter of its value and would take years if not decades to recover. Their shield has a few holes in it from prior battles they’ve lost.

What would be much more useful, factual, and honest, would be to share the following advice on how to legitimately buffer an investment portfolio against a crash…

For starters, the author and editors should show why it is important to own uncorrelated assets if you’re trying to protect against a crash. It doesn’t take much investment prowess to understand the fact that all stocks are basically the same asset class. 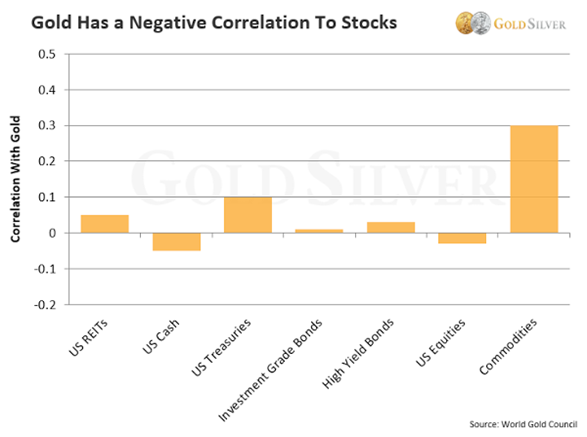 In other words, you want an asset class that tends to rise when others fall. It doesn’t do much good if all your investments rise and fall together. History shows gold can provide that inverse relationship. 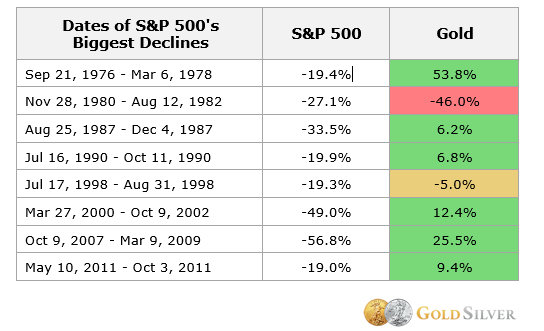 Gold has usually risen during the biggest stock market crashes over the past 40+ years.

They could also pass along the results of this 40-year study which demonstrates that the more the S&P falls, the better gold does… 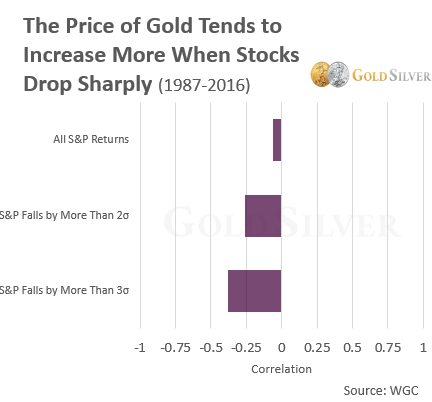 There have been some huge financial crashes throughout history, and investors who didn’t get out ahead of time lost a major portion of their portfolio value. In NO case did sound advice include buying more of the same asset class. When the Tulip Mania started to crash in 1600s Holland, was the best advice to buy a different colored tulip?

The author should also mention that once stocks crash, they take a LONG time to recover…

After accounting for inflation, the recovery periods for stocks have all been measured in decades. So even when the nominal price of the S&P eventually climbed back to its prior peak, it had taken so long that that amount of money would no longer buy as much. Your brokerage statement might show a gain, but in real terms you’d still be underwater.

And let’s not forget that gold does well not just during stock crashes but all kinds of systemic risks. 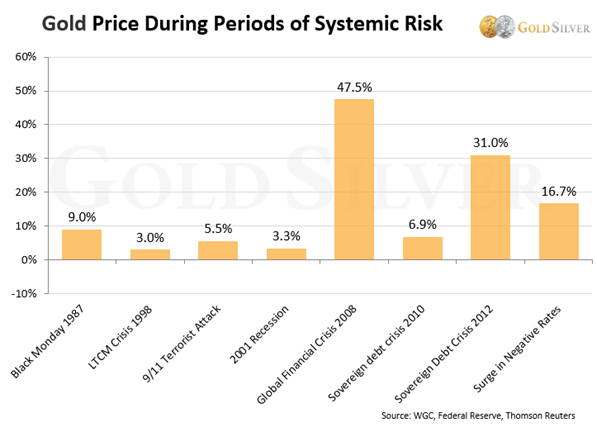 They could also show that gold is usually strong during recessions, certainly much stronger than the stocks they tout that should “drop less than others”… 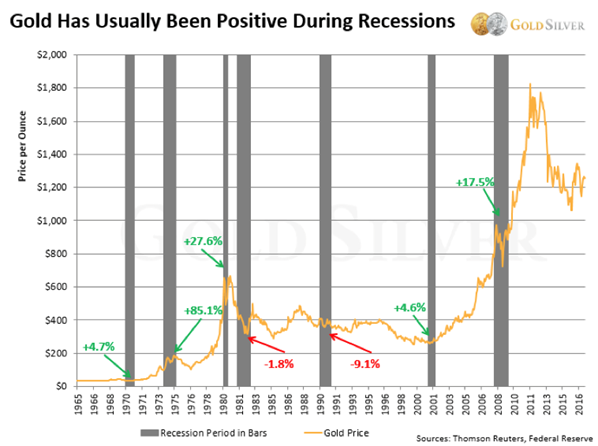 NONE of this is mentioned. “Buy stocks that will fall less” is some of the worst financial advice anyone could give. It should be abundantly clear to any investor that you don’t buy more stocks or different stocks or defensive stocks or cheap stocks to offset a stock market crash. ALL four stock classifications they recommend lost money—a LOT of money—in the last crash!

Yes, gold hasn’t done well the last few years and equities have. But even they acknowledge the markets are teetering and volatile. And in the big picture, no trend lasts forever. Mike Maloney’s exhaustive research shows a major shift is coming that will make owning common stocks foolhardy and owning gold wise.

Gold will even protect the editors at Money Magazine. Even if they buy in secret.