US Consumers on a Credit Card Spending Rampage Since 2016 Election

It’s usually very predictable. US credit card debt spending reliably spikes in Q4 every year due to holiday spending. Then it settles back down, dropping back to roughly-equivalent-to-prior Q2 and Q3 levels.

Until now. Whether they were celebrating the election results or shopping to ease their dismay, Americans actually piled on more debt in Q1 ’17 than they did in Q4 ’16. And then more still in Q2 ’17. And then more in Q3 ‘17. And of course, much more in Q4 ‘17: 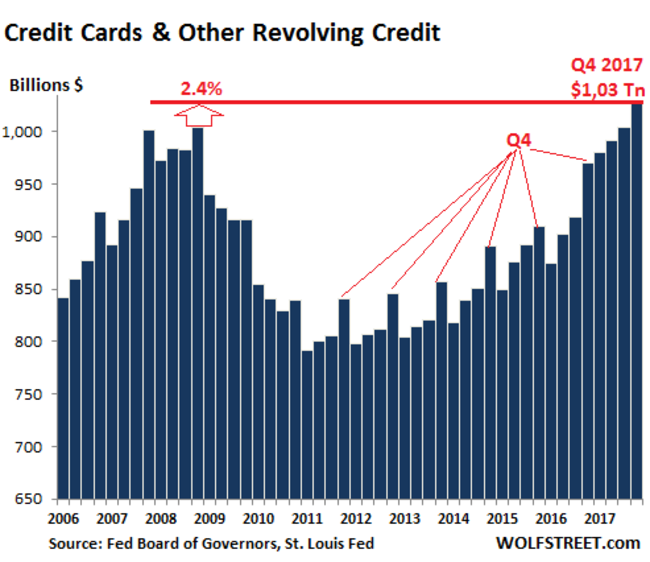 These are not seasonally adjusted numbers, and you can see the seasonal surges in credit card debt every Q4 during shopping season (as marked), and the drop afterwards in Q1. But then came 2017. In Q1 2017, credit card debt skyrocketed to an even higher level than Q4, when it should have normally plunged – a phenomenon I have not seen before.

This shows what kind of credit-card party 2017 and Q4 2016 was. Over the four quarter period, Americans added $58 billion to their credit card debt. Over the five-quarter period, they added $109 billion, or 12%! Celebration or retail therapy.

So where does that put us in terms of total consumer credit card and revolving debt? You guessed it. Right back to where we were just before the 2008 financial crisis. The macroeconomic parallels, one after the next, keep emerging. What’s that they say about those who refuse to learn from history?

ORIGINAL SOURCE: The State of the American Debt Slaves by Wolf Richter at Wolf Street on 2/8/18