Why Presidential Election 2020 Means Higher Prices for Gold and Silver

Don’t look now, but the election machine is starting up again. Primaries are in full swing as we begin to cast our eyes toward the 2020 presidential election.

And to a greater degree with every passing day, Donald Trump’s actions and policy decisions will be driven by how they will either help or hurt his own reelection chances in two years.

The question we wish to concern ourselves with here is “How can we profit from this?”

We first must assume that Trump will prefer pursuing measures that will appear beneficial to the country and the economy over the short term, even if they are detrimental over the longer term. This is not behavior that is specific to Trump or that requires any great leap of faith or logic; this has been the driving force behind the financial decision making of all presidents up for re-election since Woodrow Wilson broke the taboo of actively campaigning for re-election (it had been considered ‘undignified’ previously).

A large portion of Trump’s support was built on the idea of prioritizing American manufacturing and decreasing the trade deficit. As he is discovering, trade wars are neither good nor easy to win. They create many headlines and opportunities for grandiose statements, but they tend to proceed along predictable tit-for-tat lines that get both sides nowhere good, fast.

But a weak dollar (again, for the short term) works. Plain and simple: If a local currency is stronger vs. the dollar, that currency will buy more of any American export to that country. And the easiest way to make sure that happens is a weak-dollar policy.

Gold and silver are strongly correlated against the USD. So when the USD falls, gold and silver tend to rise. As the trade war quagmire drags on, failing to yield appreciable and obvious benefit to his core voting base, expect Trump to do whatever it takes to force the largest possible surge in US exports.

Do you expect Trump to act in his own self-interest? Expect a significantly weaker dollar. Which is to say, expect significantly higher gold and silver prices. 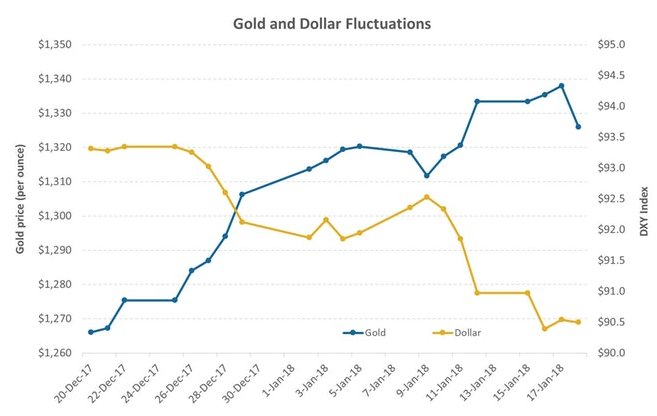 Trump’s campaign promised fair trade and a resurgence in U.S. manufacturing. While there are many ways he may accomplish this task, the most expeditious would be a weak dollar policy.

As we have seen, negotiations can be tricky, complex and time-consuming. With a mid-term election in a few months and the 2020 presidential campaign commencing shortly thereafter, the President’s patience may wear thin.

If Trump were to effectively implement a weak dollar policy, the benefits he promised voters are more likely to be apparent, even if they are only cosmetic. Investors can prepare for currency depreciation, which is frequently the expedient and often the preferred tactic of politicians.

US: More Inflation Upside to Come

Government Stimulus, Taxes and Your Investments

Some Clear Thinking On the Yesterday’s Massive Deficit Announcement

The Inverted Yield Curve and Recession

Since When Does Government Have a Money Tree?: Bloomberg