Wow, this was fast. The average interest rate for 30-year fixed-rate mortgages with conforming loan balances – $453,100 or less with 20% down) jumped to 4.80% for the week ending April 27, from 4.73% in the prior week, and from 4.66% two weeks ago, the Mortgage Bankers Association reported this morning (chart via Trading Economics): 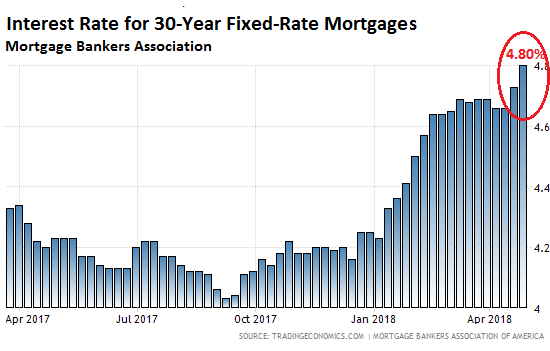 The big difference between 2010 and now, and between 2008 and now, is that home prices have skyrocketed since then in many markets – by over 50% in some markets, such as Denver, Dallas, or the five-county San Francisco Bay Area, for example, according to the Case-Shiller Home Price Index.

In other markets, increases have been in the 25% to 40% range. This worked because mortgage rates zigzagged lower over those years, thus keeping mortgage payments on these higher priced homes within reach for enough people. But that ride is ending.

China May Test Its Digital Currency with Foreign Visitors at the 2022 Beijing Winter...
More News