The single most stable and responsible economy in all the eurozone doesn’t get cute when it comes to ensuring true and stable value for its foreign exchange reserves. While China keeps a mere 2% in gold and even vaunted gold believers Switzerland all of 6%, Germany keeps a full 70% of reserves in gold..

There are echoes of the mythical Nibelung and their sunken treasure in the exhibit on gold opening at Germany’s central bank this week. The very title of the book accompanying the exhibition – “The Gold of the Germans” – evokes a devotion to the yellow metal dating back centuries.

Richard Wagner’s Ring cycle of operas about the treasure of the Nibelung is testimony to the tenacious hold that gold has on the German imagination. But it hardly explains why today’s Federal Republic has the second-largest hoard of gold in the world, trailing only that of the United States, which is steward of the world’s main reserve currency. 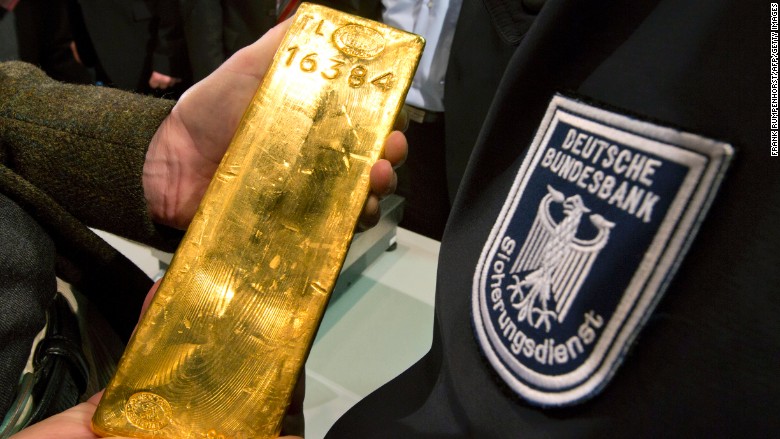 Nor does it explain why the Bundesbank decided as recently as 2012 to repatriate nearly 700 tons of its gold reserves held abroad, bringing the tally in its own vaults to half the 3,400 tons of total gold reserves.

Some 90 tons were transported from France to Frankfurt as part of the controversial repatriation. Since one of the functions of gold reserves is to be readily available to buy foreign currencies, it makes sense to still have 37 percent of the reserves at the New York Federal Reserve Bank and 13 percent at the Bank of England. But it no longer made sense to leave gold at the Banque de France because Germany and France shared a joint currency, the euro.

By now, Bundesbank executive board member Carl-Ludwig Thiele boasted ahead of the exhibition, Germany holds 1.8 percent of the world’s gold. Gold represents 70 percent of the country’s foreign exchange reserves, compared with just 2 percent for China and 6 percent for Switzerland.

ORIGINAL SOURCE: Gold still the standard for Germans by Frank Wiebe at Handelsblatt Global on 4/11/18