As you probably know, Iran launched missiles at US Bases in Iraq last night. And investors reacted by rushing into gold. 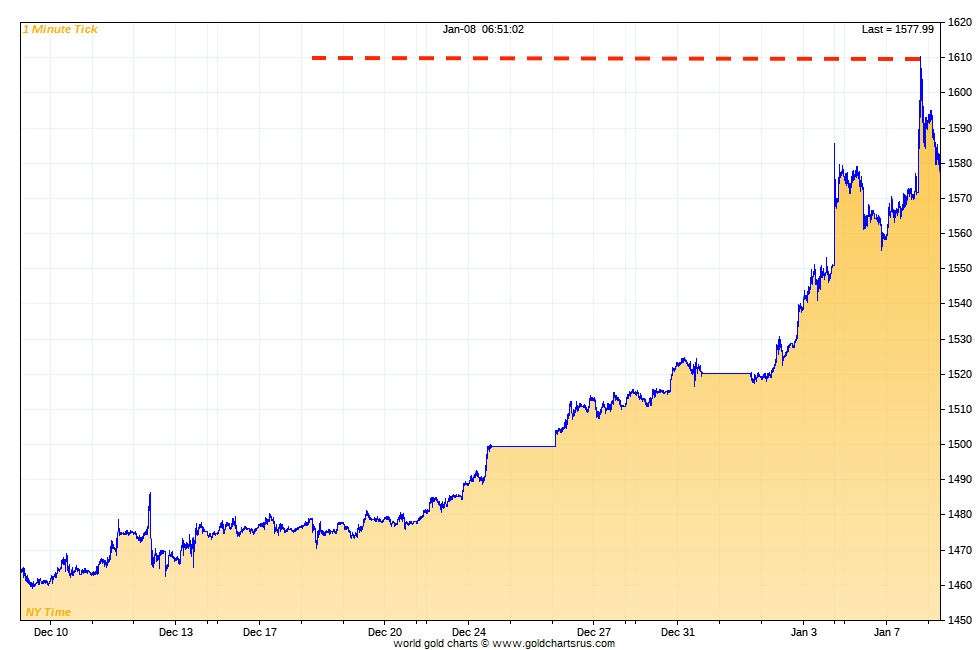 And it’s likely not over...

The US is sure to respond to this attack. And should the situation escalate, possibly tipping into a conflict or war, demand for gold could increase even more.

Gold was already on a hot streak…

2019 was a strong year for gold. Which is an especially noteworthy development since stocks also had a strong year and these asset classes tend to be inversely correlated. 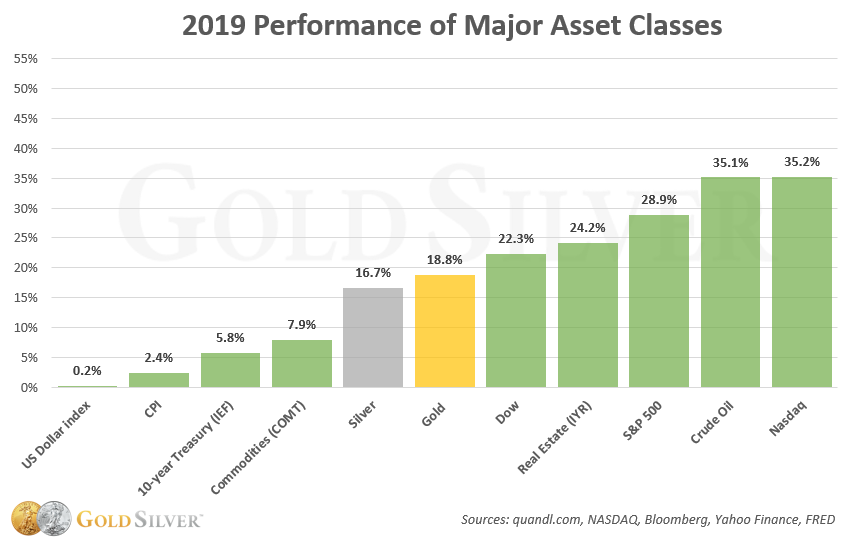 January and February are historically gold’s strongest two-month period of the year.

Silver’s highest price in 2019 was $19.30, also on September 4. However, it has yet to regain that high in early January trading.

The gold/silver ratio (gold price divided by silver price) ended the year at 84, indicating that silver remains historically undervalued relative to gold. (It's just over 85 today.)

The phenomenon of silver trailing gold is common in the early stages of precious metals bull markets. In every instance, though, silver has surpassed gold’s return before the bull run ends. Given this historical tendency, silver is a very compelling buy at present.

Gold was already in a long-term trend up, as the chart below shows.

Look how gold has performed vs. stocks and bonds since the turn of the new century... 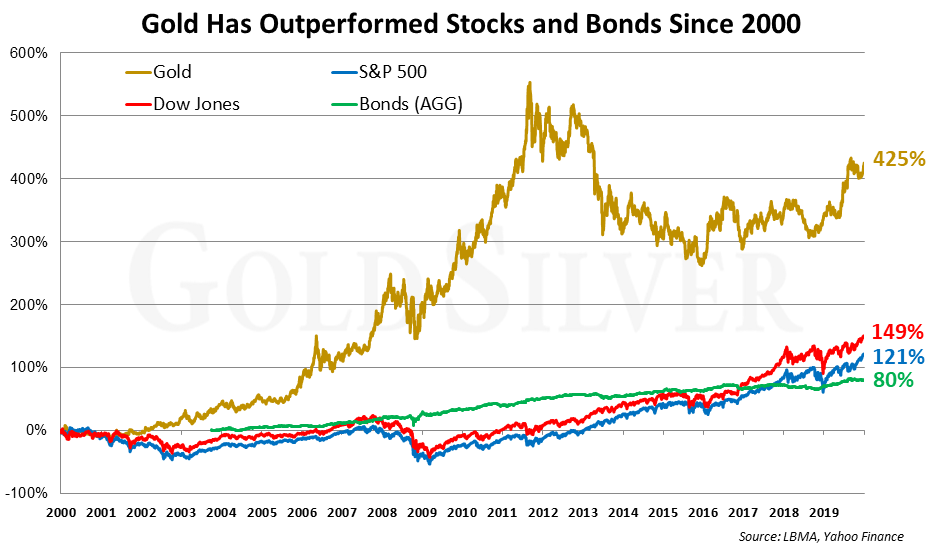 You’ll notice this 20-year time period includes both bull and bear markets for gold and stocks. The long-term value proposition offered by gold is clearly evident.

The backdrop of 2019 provides clues about what the gold market might experience in 2020 (and beyond).

Gold Price Breakout: The gold price broke out of a six-year trading range in 2019, piercing decisively through the $1,400 level. While technical analysis is not always a reliable barometer, a breakout from a trading range of this duration is significant.

Accommodative Fed Policy: The US central bank’s actions turned considerably dovish in 2019, not just by lowering rates during a period of economic growth, but also in the prompt ramp-up of liquidity injections to overnight lending markets. That jump in liquidity has resulted in the Fed’s balance sheet increasing at the fastest pace since the height of the 2008 financial crisis. Meanwhile, “real” rates remain negative, an environment supportive of gold. It is worth pointing out that precious metals began to move almost in lock step with the about-face on Fed interest rate policy, the price jumping from $1280 to $1550 in three months.

Recession Watch: Slowing economic growth remains a global concern. Economic figures were mostly mixed as the new year began, but any downturn would push major central banks to keep interest rates low and pump liquidity into financial markets, both of which would be positive for gold. If a recession were to occur, gold demand is likely to rise. A favorable outcome in the trade war between China and the US could boost manufacturing activity, though it remains to be seen if this would lead to a jump in GDP.

Central Banks Continue Buying Gold: Figures from reporting central banks show that more gold was purchased by this group in 2019 than since Nixon was in office. The World Gold Council projected that net gold purchases by central banks will likely remain robust, even if they are lower than the record highs seen last year.

Stock Market Performance: If equity markets remain positive, gold’s performance could be muted (though as we saw in 2019 both asset classes can rise). Stock market volatility or corrections has historically pushed investors into gold.

2020 Election: As part of Trump’s reelection campaign, he is likely to do everything he can to support the economy. A number of prominent hedge fund managers have publicly stated that a Warren or Sanders victory could negatively impact stock markets, which, if materialized, would likely be positive for gold.

Negative Yield Debt: An issue that became front-page headlines in mid-2019, the total of negative yield bonds has since fallen from its peak. But the concerns remain; as one example, no German government bond currently trades with a positive yield. The jump in negative debt gave rise to talk of MMT (Modern Monetary Theory); it postulates that if debt is denominated in its own currency, a default could never occur since the government could print money to settle it. An increase in negative bonds or the introduction of MMT would be bullish for gold.

Impeachment Trial: If the senate proceeds with a trial, market volatility would be expected to increase. If Trump is impeached the knee-jerk reaction would likely lift gold prices. An impeachment is likely to have only a short-term impact, unless Trump is actually removed from office.

Conflict with Iran: As we write, tensions between the US and Iran have escalated. In response to killing Qassem Soleimani, the head of Iran's elite Quds military force, Iran attacked two US bases in Iraq last night.


This is a stark reminder of the possibility of black swans, unexpected events that catch investors off guard. There seems to be an increasing number of these possibilities, bolstering the case for holding a meaningful amount of physical bullion.

The backdrop for gold looks constructive for another year of gains. A black swan event or sudden crisis could lead to even bigger advances.

An appropriate balance of gold in a portfolio can serve as an effective hedge, particularly in light of ongoing geopolitical conflicts, the Fed’s dovish stance with both interest rates and money printing, and the risks associated with a recession, US election, overvalued stock market, and (hopefully not) war.

By the way, if you haven’t seen it already, watch this special event with Mike Maloney, dedicated to helping you make sense of this market and prepare your portfolio for 2020 and beyond.

Last night was a stark reminder of the need to be prepared before major crises take place.