The CPI is rising, lockdowns are easing, and cooped-up citizens are ready to party.

That’s the context as we begin the second half of the year. Let’s look at how gold and silver performed in the second quarter and year-to-date, along with the factors that could impact them in what may be an exciting second half.

Spiking yields in Q1 hindered gold and silver, but spiking inflation in Q2 pushed them back up.

Here’s how they performed against other major asset classes in the second quarter. 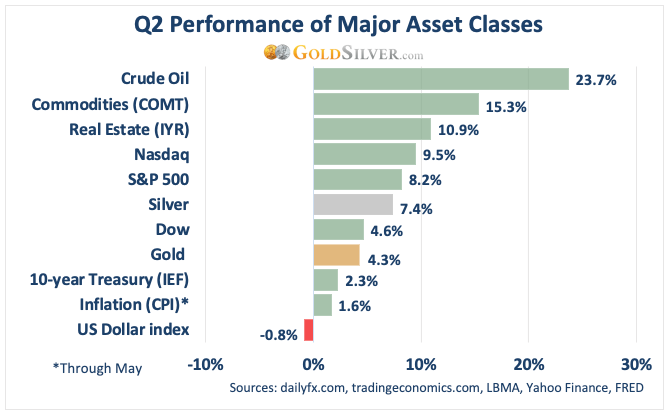 Oil stole the spotlight, along with commodity and real estate prices. And on a pace that seems like it’ll never end, the S&P 500 closed the quarter at yet another record high.

Bitcoin (not shown) fell over 40% in Q2, once again highlighting its extreme volatility.

Despite a 13% run mid-quarter, gold and silver ended the first half of the year negative. 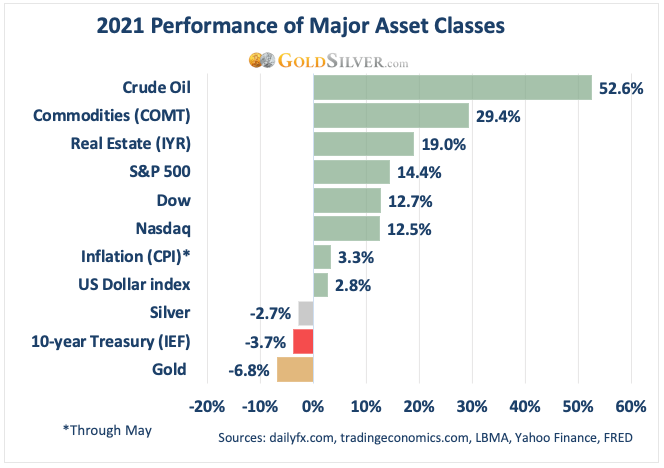 Gold struggled last month when the Fed indicated it “may” raise rates in 2023.

While the knee jerk reaction may be to sell gold if nominal rates rise, as our readership knows it is the real rate (10-year Treasury minus the CPI) that has the most influence on the price. And negative real rates look like they’re here to stay for quite a while, even if the Fed raises the nominal rate.

What Happens in the Second Half of 2021?

As we begin the second half of the year, to state the obvious this will be no ordinary summer. Much of the world is slowly exiting the pandemic, the easing of restrictions accompanied by an eagerness to travel. Meanwhile, reflation remains a dominant driver for many asset prices.

These and more are some of the factors that could impact economies and markets. Here’s what we’re watching that will likely have the most effect on gold and silver, what just may be a time for some fireworks…

Is Inflation Really Transitory? When inflation spiked, the Fed declared it would be transitory. It seemed most investors and economists agreed at the time. But now some doubt has started to creep in…

It’s not just government officials and economists. According to a Harvard CAPS/Harris poll in late June, 85% of Americans are “concerned about inflation.”

Perhaps for good reason… General Mills just announced it is raising prices in nearly all its grocery categories, citing the “highest costs in a decade.” Campbell Soup and J.M. Smucker made similar announcements, and the Costco CFO said on their recent quarterly call that “the feeling is that inflation will continue for the most part of this calendar year.”

Meanwhile, the Producer Price Index (a measure of wholesale costs) rose 6.6% in May, the fastest increase on record. Input costs also rose at the fastest pace since data collection began in 2007, weighed down by ongoing and severe supply-chain disruptions and labor shortages. Delivery times for suppliers also lengthened to the greatest extent on record in June.

And despite the selloff in lumber prices, most other commodity prices remain elevated. Oil is now above $75 a barrel, a three-year high, pushing the average price of unleaded gas in the US to $3.12 per gallon, a 43% increase over last year.

And now record temperatures and a nationwide drought are piling on to the woes. Climate scientists report that 9.8% of the country is currently in an “exceptional drought,” the most severe designation, which includes widespread crop and pasture losses. Roughly 44% of the nation is experiencing some level of drought. This condition could push food prices higher.

While the transitory question may not be answered immediately, if elevated inflation rates persist, investors are bound to look for hedges – gold and silver being obvious choices.

Fiscal Free-for-All: The Democrat-controlled House just approved $715 billion for “surface transportation and water infrastructure”, a first step in President Biden’s $1.2 trillion infrastructure deal, which has also reached tentative agreement with Republicans and is supposed to be finalized by September.

These funds would represent a direct injection into the economy, as opposed to QE efforts that tend to inflate asset prices.

In light of the multiple stimulus measures, the Congressional Budget Office projects the deficit will reach 13.4% of GDP this year. That would be the second-largest level since 1945, exceeded only by 2020.

This level of government spending is almost certain to weigh on the U.S. dollar, which would support gold and silver prices.

Bloated Stock Market: In light of high stock valuations, the Skew Index—a measure of the difference between the cost of derivatives that protect against large market declines and the right to benefit from such—just reached record highs. Gold has historically acted as a buffer against stock market weakness.

Soaring Home Prices: The boom in real estate valuations is global, stretching from the U.S. to the U.K. to China. Bloomberg Economics reports that global home values are now rising at the fastest pace since 2006.

Many drivers, however, appear to remain in place: mortgages below 3%, a post-pandemic desire for more space, newly-remote workers relocating, and perhaps FOMO—the fear that one might need to buy now before it gets even more expensive. As with stocks, gold can hedge against reversals in real estate prices.

Seasonality About to Kick In? The second half of the calendar year is typically a strong period for the gold price. This chart shows the average daily gain and lose since 1975; the run that typically begins after the July 4th holiday sticks out. 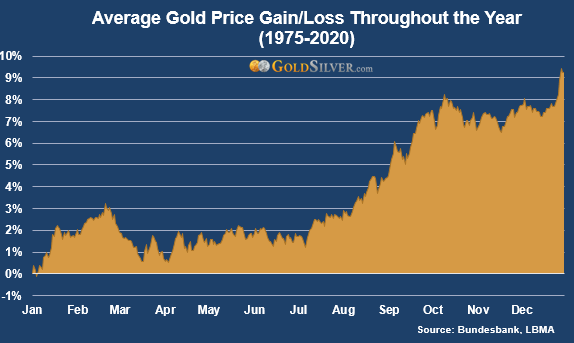 Over the past 46 years, there is a strong tendency for gold prices to advance in the second half of the year, accounting for much of its annual gain. This is also true of silver, with its volatility typically pushing its percentage gain higher.

Higher Taxes: In addition to the prospect of higher tax rates in the U.S. to fund new spending plans, a group of 130 nations just agreed to a global minimum tax on corporations, part of an agreement to “overhaul international tax rules.” Higher tax rates could depress company earnings, or add to inflationary pressures if costs are passed on to consumers.

Silver Outperformance: Part monetary metal like gold, but also an industrial metal whose uses will climb in the infrastructure spending plan, this dual role could push it to advance more than gold. It’s noteworthy that silver rose more than gold in Q2, and is down less YTD.

Black Swans: The environment remains ripe for an unexpected event. Candidates include a spread of Covid variants, fallout related to the Fed's reverse repo facility that’s now near $1 trillion, or issues surrounding the deadline for reinstatement of the federal debt ceiling at the end of July. Another shock to the global economy or markets would underscore the importance of gold’s hedging abilities.

The most likely scenario for the second half of 2021 is one where gold continues to offer a meaningful and necessary hedge, along with the distinct possibility of yet another set of record high prices.