Gold in Q2: Snowball Rolling Downhill, Getting Bigger With Every Spin

It’s time for our quarterly update, where we look at the performance of gold and other major asset classes, along with year-to-date performance. We also look at the Fed’s impact on gold, the gold/silver ratio, and the prognosis for the second half of the year. See what message you glean from last quarter’s action…

Gold’s selloff in March led to a strong rebound through mid-April, the price jumping $268 in just three weeks. It then traded mostly range-bound until the last week of the quarter, when it spiked again to end Q2 at $1,783.58, up 12.6%.

Here’s how gold and silver performed in the second quarter, vs. other major asset classes. 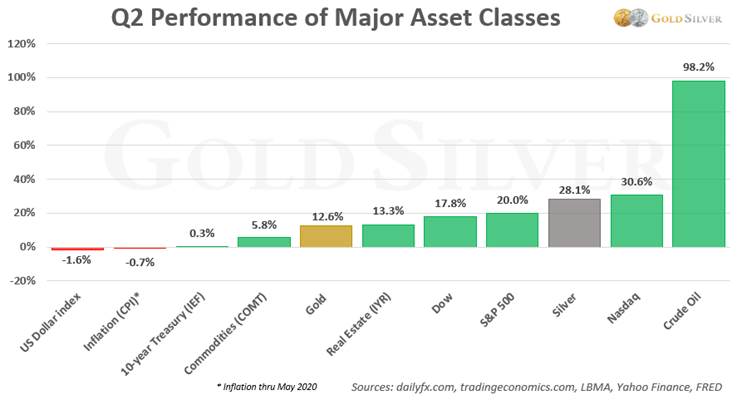 It was a banner quarter for gold: the price ended at its highest quarterly closing price in history, as well as its second highest monthly close ever.

Silver was the standout, jumping 28.1% in three short months.

Other asset classes rebounded sharply in the second quarter, too. The jump in crude oil was its biggest quarterly gain since 1990, and the S&P 500 logged its largest quarterly advance since 1998.

While gold didn’t “bounce” since it had risen in Q1, it did record its strongest quarterly performance since Q1-2016.

Even more impressive is this…

Looking at the first half of 2020, gold leads all major asset classes. 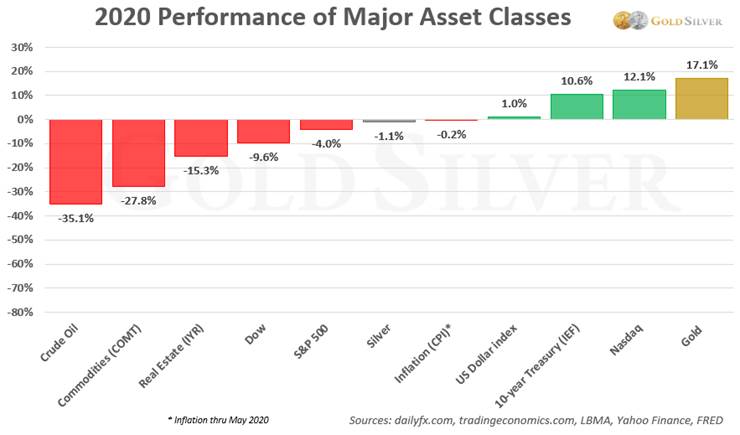 Gold is up 17.1% through the first half of 2020. Many assets, despite the bounce in Q2, remain underwater, the Nasdaq and 10-year Treasury the only major exceptions.

You’ve probably heard stock investors say, “Don’t fight the Fed.” Well, it has applied to the gold sector, too…

The Fed’s “unlimited liquidity” pledge is not only still in play but grew last quarter to include the purchase of individual corporate bonds—even junk bonds! It also recently established the “Main Street Lending Facility” to support small businesses, all of which shows there is little hesitation by Fed official to jump in wherever and whenever they think it’s necessary.

The minutes from the Fed’s June 9-10 meeting how that it expects to continue with “highly accommodative monetary policy for some time.” All those fancy methods of quantitative easing have driven an increasing number of investors into gold.

Meanwhile, the Fed funds rate remains near zero. Most Treasury rates can’t match even the low inflation reading. In fact, the “real” rate on the 10-year Treasury yield (after inflation) has steadily fallen for 18 months, and at the end of Q2 was solidly below zero.

While yields continued to weaken, the gold price has now risen three consecutive months and six consecutive quarters. Gold is the ideal fixed-income alternative in a low or zero rate world.

Despite silver logging a 28.1% gain last quarter, the GSR (gold price divided by the silver price) remains at nosebleed levels.

The ratio ended the quarter at 99.08, a reading that is clearly overstretched. For those investors that feel the gold price got away from them, silver still offers deep value. We think the “catch-up” could be breathtaking.

With all the records gold set last quarter, is the price getting a little frothy? The answer to that question lies in the answer to this one: are the risks that drew investors into gold all gone? See what conclusion you draw as you review the following list…

The concern among mainstream investors is that this could impact Q2 and Q3 earnings more than they originally thought. Fed Chair Jerome Powell said the outlook for the world's biggest economy is “extraordinarily uncertain”. Greater than expected economic fallout would push more investors into safe-haven gold.

Unemployment. Ugly unemployment claim numbers could worsen if the second wave of the virus can’t be contained. Already, payouts to the jobless exceeded a record $100 billion in June, after $93.6 billion in May. Even stalwart Apple has begun to reclose their stores in US coronavirus hotspots.

Recession. The IMF lowered its 2020 economic growth forecast, projecting the world economy will fall nearly 5% this year. “The COVID-19 pandemic has had a more negative impact on activity in the first half of 2020 than anticipated, and the recovery is projected to be more gradual than previously forecast.” As we’ve regularly said, the worse the economic data the more likely we see more…

Monetary and Fiscal Stimulus. World central banks and governments have already embarked on unprecedented levels of monetary intervention—just last month the Bank of England added to its bond-buying program and the US senate passed an extension to the small business loan program. But if the economic data they look at doesn’t improve they could easily resort to throwing more stimulus at the problem. This may help in the short-term, but what are the medium and long-term impacts? Years of easy monetary policy have already driven global bond yields to zero or below, so at this point how much ammunition does the Fed have left?

Public Debt. The Treasury’s public debt exceeded $26 trillion in June, what amounts to 120% of GDP. This level is not sustainable—but the only solutions they’ve come up with is to create more currency.

Vulnerable Stock Markets. Stock valuations have rebounded to the extent that mainstream investors must now pay a hefty premium. Risk management for those investors just got more complicated.

Real Interest Rates. That real interest rates are at or below zero makes gold arguably more compelling than bonds. Most bonds, on a real basis, offer yields only slightly higher than holding cash!

US-China Trade Deal. Trump has talked about “decoupling” from China and said he was “more and more angry at China.” Throw in the fact that China sees the US stance on Hong Kong as interference in its domestic affairs and geopolitical conflicts just aren’t letting up.

Commercial Real Estate. Store closures, unemployed renters, and weakening property prices have led to a surge in redemptions from many commercial real estate funds. This segment of the property market is now vulnerable, despite low interest rates. Is residential real estate next?

Presidential Elections. While not until November, the rhetoric is already heating up. A number of analysts have stated that a win by Joe Biden could serve as a catalyst for gold since it would introduce uncertainty in U.S. policies.

However, demand for physical product remains at above average levels. Another spike in demand and bottlenecks in refining and transportation seem certain. Make sure you take advantage of better product availability and the more attractive premiums and delivery times while they’re available.

The gold snowball is indeed rolling downhill, my friends, and given the scary economic, monetary and political imbalances that exist around the world, that snowball is bound to get a lot bigger.

The issues facing us aren’t ones that have easy or simple solutions. It’s hard to imagine a more critical time to own gold than now. And a more undervalued silver price compared to where it’s going.