Our quarterly report is to provide an update on the context of gold and silver price activity. We hope you find it useful as the precious metals market forges ahead.

This update briefly examines the performance of gold and silver vs. other major asset classes during the third quarter of 2019, along with YTD performances. We also highlight the increased participation that has occurred in this market, along with specific conditions that could impact it in the final quarter of 2019.

The gold price was subdued in July, but economic and geopolitical headlines changed in early August, abruptly drawing investors into gold. The US trade war with China continued to dominate the news, along with the expected 25-basis point cut in the Fed funds rate. Other catalysts included the jump in negative rates globally, and growing recession fears. The gold price responded, pushing to $1,550 by early September. It closed out the month at $1,471 per ounce.

Here is gold and silver’s Q3 performance, along with other major assets classes. 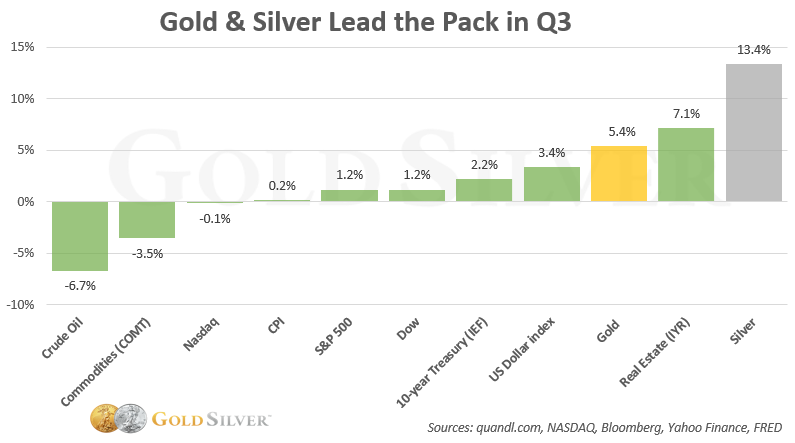 Gold ended the quarter up 5.4%, beating all major US stock market indexes. This after advancing 8.8% last quarter. Only a real estate ETF outperformed gold, a likely result of the Fed lowering rates.

Silver was the Q3 leader. It had lagged gold last quarter, which is not uncommon in the beginning stages of a new bull market, but it spiked in August to become the top performer.

As we pointed out last quarter, the gold/silver ratio (gold price divided by the silver price) strongly favored silver. Although the ratio has since fallen, it ended the quarter at 86, still historically elevated, meaning that silver remains deeply undervalued relative to gold and is a Best Buy in our view.

Gold YTD: As Much Offense as Stocks

Through September 30, gold has risen 15.9% on the year, closely tracking equities. 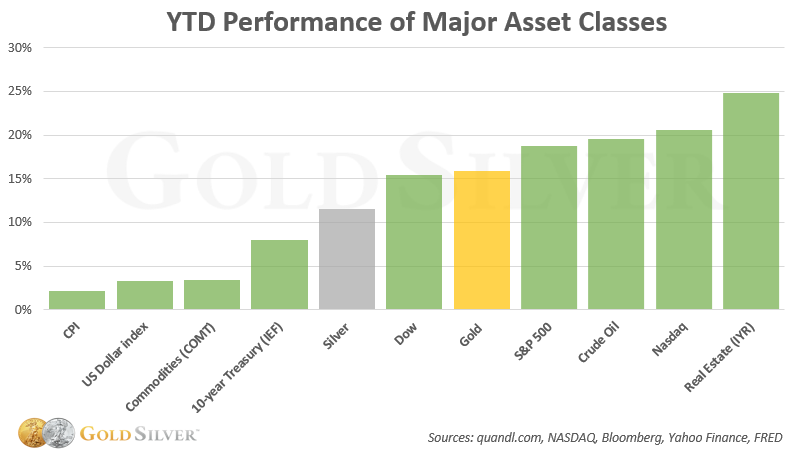 While mainstream investors typically view gold as a defensive asset, it has been a profit-making investment in 2019.

Silver trails gold on the year which is not unexpected. Much like how small-cap stocks trail large-cap stocks in a rally and break out later, silver appears to be catching up to its big brother in gold. If the gold price continues higher, history says there will be a later and large move in the silver price.

It isn’t just the continued upward price momentum that points to a new bull market. We’ve seen a jump in the number of investors participating in this market.

Hedge Funds: Gold positions rose to their most bullish on record since 2006.

Central Bank Purchases: Central banks purchased the most gold in H1 this year since becoming net buyers in 2008, this after 2018 set records. China and Russia continue to add gold to their reserves every month, while Turkey’s gold holdings have risen 45% year over year. We showed last week that central banks have clearly become more bullish on gold.

Gold-Backed ETFs: These products come with built-in risks, but buying and selling levels can give us hints about how the mainstream is feeling about gold. Holdings rose in Q3, including 498,162 ounces added on September 23, the most in three months. Through September 26, bullion ETFs added gold nine consecutive days.

Sector Rotation: The SPDR S&P 500 ETF Trust lost a whopping $8.7 billion in withdrawals during the week of September 23-27. It sure looks like some of these funds went directly into the gold market.

Higher Price Forecasts: As we’ve outlined, conviction in gold’s uptrend has strengthened and pushed many analysts and banks to raise their price projections. Most see $1,600 gold next year, with some as high as $2,000.

Here are potential catalysts we’re watching as we enter the final quarter of 2019.

Global Slowdown/Recession Fears: Weaker economic data have surfaced, particularly from China and Germany, while US manufacturing data is now at its weakest level since 2009. The 2-year and 10-year Treasuries inverted for the first time since June 2007, and the New York Fed gauge of the probability of a recession in the next 12 months is at the highest level since 2008. Gold has performed well during recessions.

Geopolitical Tensions: The trade and currency wars with China, along with a renewed conflict with Iran, remain unresolved.

Impeachment Inquiry: Who thought we’d be talking about impeachment of the US president last quarter? It appears the inquiry will drag on, with several of Trump’s close associates, including cabinet members and his lawyer, likely forced to testify.

Brexit: The lingering uncertainty surrounding the UK/EU breakup continues to weigh on markets.

These big-picture forces continue to support gold’s safe haven appeal. We couldn’t agree more with how James Steel at HSBC Securities summed it up: “Increasing your gold holdings is probably a judicious thing to do, because it is one of the few things you can buy that is liquid and is on nobody else’s credit.”