Gold edged lower last night, trading in a narrow range of $1273.75 - $1278.75.  The yellow metal ticked up to its high during early Asian hours against a slight decline in the US dollar (DX from 98.04 – 97.94), and some bellicose words from Trump on Iran (if Iran wants to fight, that will be the official end of Iran.  Never threaten the US again).  However, the yellow metal retreated to its $1273.75 low (2-week low) during European time, despite the DX sliding a bit further (DX to 97.92).  The greenback was pressured from some strength in the yen (110.30 – 109.80, risk off, stronger Japanese GDP) and a modest uptick in the pound ($1.2725 - $1.2757, May promises “bold offer” to MP’s in final bid to get her Brexit deal through Parliament).  Gold was also unable to benefit from mostly weaker global equities which were hurt by continued fallout on the stalled US-China trade talks (China in “no rush” for another trip by Mnuchin, Trump OK with current state of play), and fallout on the US crackdown on Huawei that sent the tech sector lower (Google suspended business with Huawei).  While the NIKKEI was up 0.2%, the SCI fell 0.4%, European markets were off from 0.8% to 1.3%, and S&P futures were -0.4%.  Firmer oil (WTI from $62.66  - $63.09, Saudi’s al-Falih wants to gently reduce oversupply) was supportive of stocks.

Though US stocks opened softer, they rallied back into the late morning hours (S&P -6 to 2853) – in a similar pattern we have seen in recent sessions - helped by some dovish remarks from the Fed’s Harker (worried about low inflation expectations) and Bullard (will get more aggressive in pushing FOMC to lower rates). The 10-year yield bounced to 2.403%, but the DX only ticked up to 97.94.  Gold edged lower in response, but found support at $1275.

US equities softened toward mid-day (S&P -18 to 2843), with losses in the IT, Real Estate, and Communication Services leading the decline.  This was despite some dovish comments from the Fed’s Williams (changed view on how low unemployment can get before sparking inflation).  The 10-year yield slipped to 2.398%, and the DX traded down to 97.88.  Gold bounced and took out its overnight high to reach $1279.  However, lacking follow through, it slid quickly back to $1275.50.

Open interest was off 4.0k contracts, showing a net of long liquidation from Friday’s decline.  Volume was lower but still robust with 292k contracts trading.

Bulls were disappointed that gold failed to have a more significant bounce today, given the weakness in US stocks and the slight pullback in the DX.  They’re concerned that gold made its 4th consecutive lower low and lower high, and extended its decline to $30 from its $1304 last week.  However, other bulls were encouraged that it was able to bounce off of today’s $1274 low, and see the recent move down as a healthy correction (albeit a bit excessive) - and are using the pullback to get long(er) at more attractive levels.  Bulls feel that the trend is their friend and that the up move going back to the 8/16/18 $1160 low is still intact (up trendline at $1272).  Despite Powell’s brush off of recent weak inflation data as transitory from two weeks ago, bulls feel that the Fed’s dovish pivot has not been altered, and that market perceptions that the next move(s) will be a cut and not a hike are still intact – especially given the abundance of dovish commentary from the several Fed governors who have spoken in recent days, along with escalating fears that a protracted trade war will impede global growth (FedWatch has a 52.1% probability of a 25bp rate cut at the Oct FOMC meeting).  This they feel will keep US interest rates from climbing, keep the US dollar in check, and allow gold to probe higher.  Bulls also point to Friday’s Commitment of Traders Report (as of 5/14) that showed the large funds with a still relatively small net long position (adjusted with last 4 sessions to approximately 105-110k contracts), and a still relatively high gross short position (102k contracts).  Therefore, the bulls feel the gold market remains set up to move higher, as these shorts will provide fuel to further upside moves -  when forced to cover.  Bulls look for gold to consolidate between $1272 - $1275 and then challenge the former support level and down trendline at $1287.

Bears are encouraged by gold’s $30 decline in the last 4 sessions, making 4 consecutive lower lows and lower highs from last week’s $1304 high.  While some bears were disappointed with gold’s ability to bounce off of $1274 earlier, others are using any strength to get short(er), expecting a quick test of the very nearby key support level at $1272 (up trendline from 8/16/18 $1160 low).  The bears applauded Powell’s less dovish tone from two weeks ago, and feel that the prospect of an imminent rate cut is off the table now for at least the near / intermediate term.  They feel that this should remove downward pressure off of bond yields, and allow the US dollar to appreciate against other currencies, as they feel the dollar remains the “cleanest dirty shirt in the laundry basket”, with the US as the sole global growth engine. Recent soft data for both Germany and the Eurozone that drove the German 10-year yield further into negative territory over the past two weeks underscores this view.  While derailed recently over fears that US-China trade talks are on the rocks, bears view that a deal is in both sides best interests, and are optimistic that an agreement will be put in place.  They expect the rebound in US equities seen over the past 5 months to resume (S&P made all time high on 5/1), putting further pressure on the yellow metal.  Bears expect gold’s pullback to resume, and will look for gold to challenge initial support at $1274-75(options, double bottom – 5/17 and today’s low) and then $1272 (up trendline from 8/16/18 $1160 low).  Below this level, bears expect to trip significant long liquidation that they believe should lead to a cascade of selling through $1269 (double bottom - 4/24 and 5/3 low) and $1265-67 (5 bottoms - 12/25, 12/26, 12/27, 4/23, and 5/2  lows) to bring a test of the 200-day moving average at $1257.

All markets will continue to focus on geopolitical events (especially Brexit news), developments with the Trump Administration (especially on US-China trade, potential legal issues), Q1 corporate earnings, oil prices, and will turn to comments this evening from Fed Chair Powell, followed by reports tomorrow on Japan’s Department Store Sales, Eurozone OECD Economic Outlook and Consumer Confidence, US Existing Home Sales, and comments tomorrow from the ECB’s Guindos, and the Fed’s Evans and Rosengren for near term guidance.

US Mint sales – gold eagles up, silver off but still on allocation only: http://www.coinnews.net/2019/05/17/gold-and-other-precious-metals-mark-weekly-declines/ 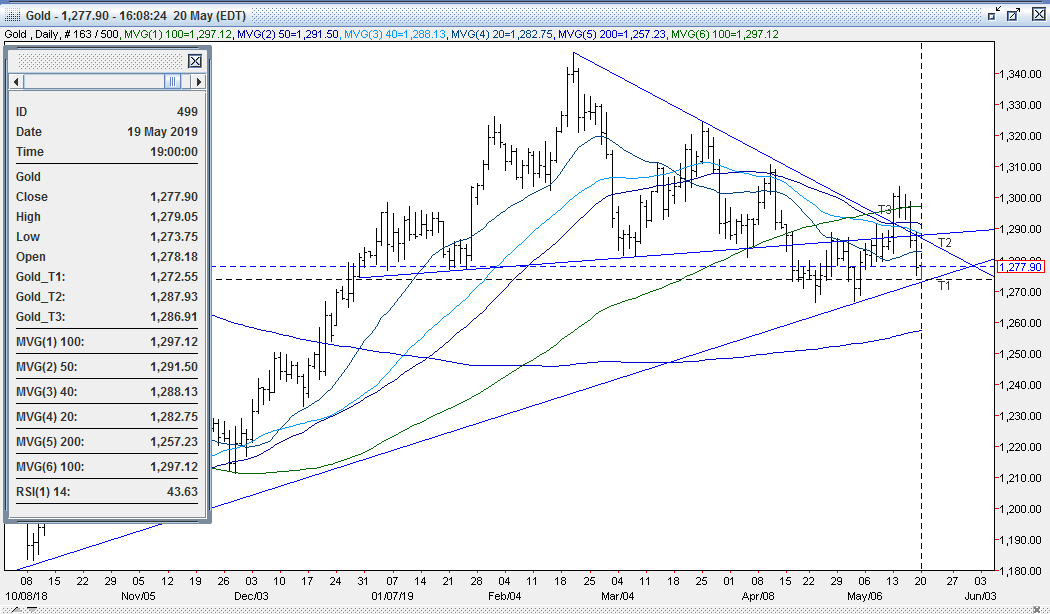 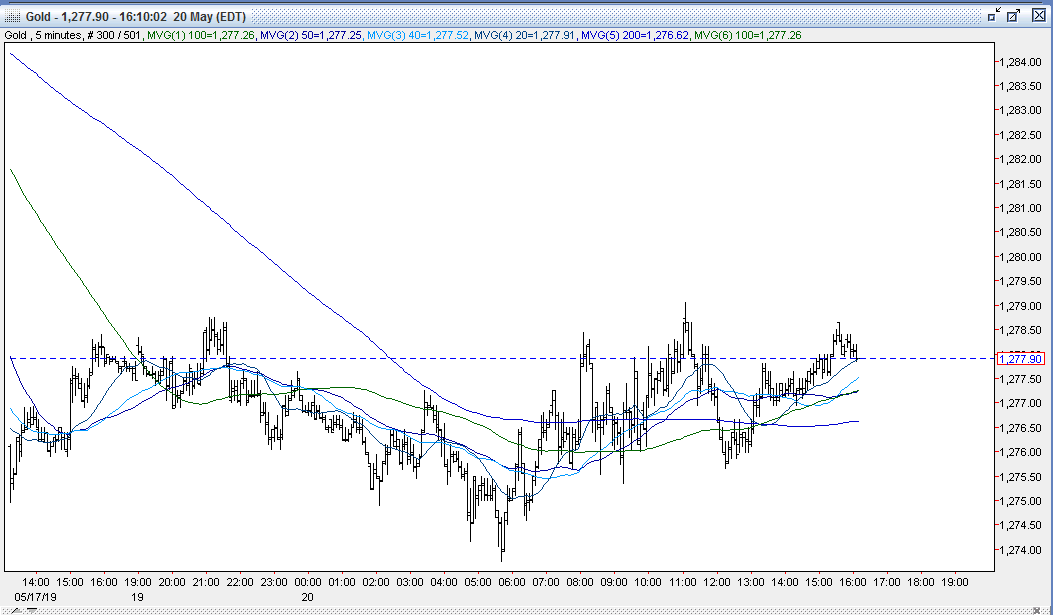 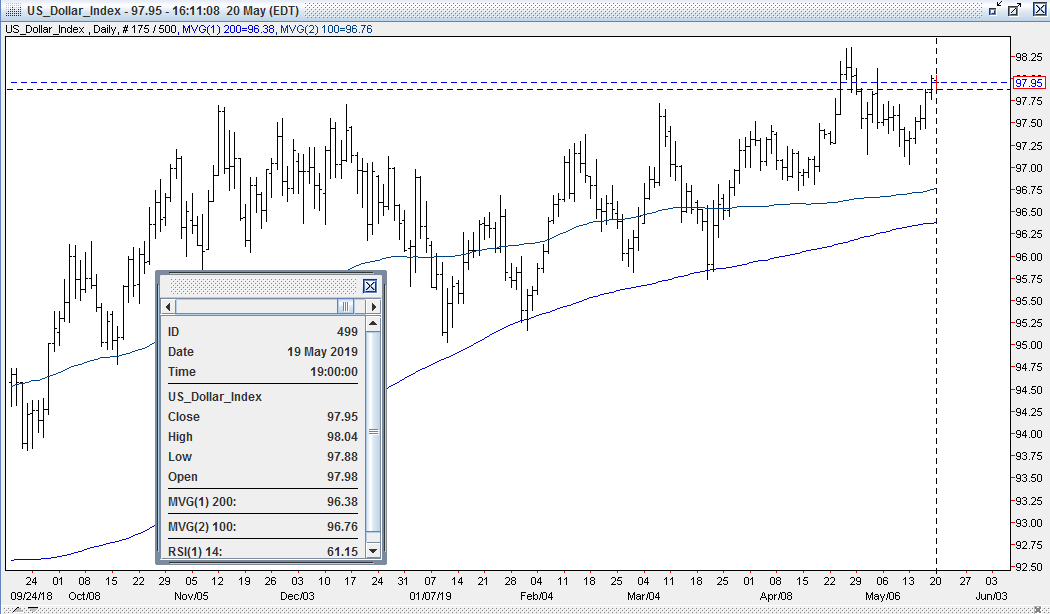 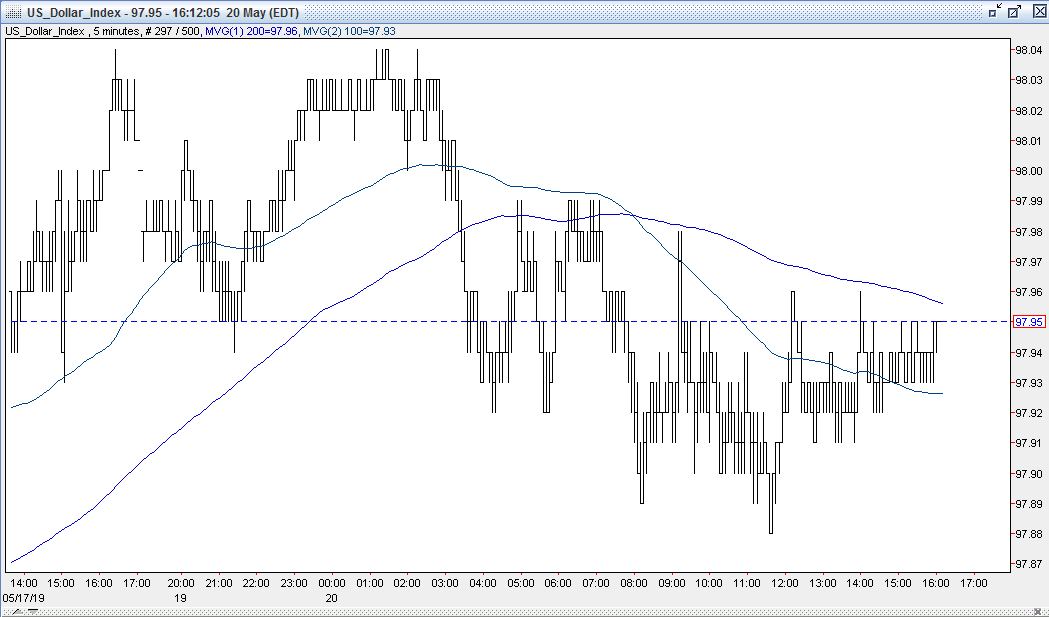