US stocks opened weaker (S&P -38  to 2750), weighed by the Mexican tariff issue compounding the already worrisome US-China trade war (China’s former PBOC governor Xianglong warns the current trade war could cause a global financial crisis).  Auto makers and suppliers took a large hit and all sectors were in the red except for Real Estate, with heavier losses seen in Communication Services, Consumer Staples, and the Consumer Discretionary.  A further drop in oil (WTI to $54.72, 3-month low, ramping up of trade tensions hurting demand outlook) also weighed.  The 10-year yield dipped back to 2.163%, and the DX sank to 97.75 – taking out its overnight low.  The DX was pressured by the rising probability of the Fed cutting rates sooner than previously thought (FedWatch now has 68.1% probability of a 25bp cut at the September meeting, and a 58.6% probability of a 2nd 25bp cut at the December meeting).  Gold rallied, taking out more stops over $1299, $1300 and $1301 (double top 5/13 and 5/15 highs) to reach $1304 – where the 5/14 high capped the move.

Into the afternoon, US stocks turned back down (S&P -31 to 2756), with reports of discord in the White House over Trump’s tariffs against Mexico (Mnuchin and Lighthizer said not to be in favor of the action) outweighing some dovish (though theoretical) commentary from the Fed’s Williams (need to cut rates aggressively when deflation or a severe downturn threatens).  A further decline in oil (WTI to $53.06) continued to weigh.  The 10-year yield edged back down to 2.152%, but held above its prior low.  The DX fell back to its prior low of 97.75, and gold probed higher.  The yellow metal took out the prior and 5/14 $1304 top to reach $1307 (2-month high), where resistance there (50% retracement of down move from 2/20 $1347 high to 4/23 $1266 low) capped the rally.

Open interest was off 10.9k contracts, showing a net of short covering from yesterday’s advance along with a fair amount of position closing from yesterday.  Volume was much lower but still very healthy with 345k contracts trading – still inflated by the June-August contract rollover (though winding down).  The CFTC’s Commitment of Traders Report as of 5/28 showed the large funds cutting 9k contracts of longs and 7k contracts of shorts.  This was done on gold’s up move from $1270 to $1285, reflecting a decent amount of profit taking from longs along with a fair amount of short covering.  The Net Fund Long Position edged down to 87k, with gross shorts slipping to 108k.  In the last three sessions, however, a hefty amount of short covering and new longs came in, taking the NFLP well north of 105k contracts, and reduced the gross shorts to around 100k contracts.  Even this adjusted NFLP remains historically low, and the adjusted level of gross spec shorts remains relatively high.  This leaves the gold market well positioned to recover higher as many longs remained sidelined and the still elevated amount of gross shorts - when forced to cover - will help accelerate any upside moves.

Many bears were stopped out today, and are still smarting from gold’s failure to breach the up trendline from the $1160 low at $1275 from earlier in the week.  However, other bears with stronger hands used gold’s bounce in the past two sessions to get short(er) at better levels.  Bears see gold’s $37 rebound from its $1270 low on 5/21 as overextended, with its 14-day RSI at 64.2 to be approaching overbought.  However, some bears are feeling a growing concern over the supportive nature of the decline in global bond yields – especially the US 10-year yield’s decline to fresh 20-month lows, and with markets predicting an increasing probability that the Fed will be moving to cut rates later this year (FedWatch now has 68.1% probability of a 25bp cut at the September meeting, and a 58.6% probability of a 2nd 25bp cut at the December meeting).   The bears applauded the slightly hawkish FOMC minutes from the prior Wednesday, which echoed Powell’s less dovish tone from 4 weeks ago and feel that the prospect of an imminent rate cut is off the table now for at least the near / intermediate term.  They feel that this should remove downward pressure off of bond yields (though not the case this past week), and allow the US dollar to appreciate against other currencies, as they feel the dollar remains the “cleanest dirty shirt in the laundry basket”, with the US as the sole global growth engine. Recent soft data (including today’s German CPI and Retail Sales) for both Germany and the Eurozone that drove the German 10-year yield further into negative territory over the past two weeks (record low yield today) underscores this view.  While derailed recently over fears that US-China trade talks are on the rocks, bears maintain that a deal is in both sides’ best interests, and are optimistic that an agreement will be put in place.  They expect the rebound in US equities seen over the past 5 months to resume (S&P made all time high just 1 month ago), putting further pressure on the yellow metal.  Bears expect gold’s rally to make a hasty retreat, and trip sell stops below the previous resistance levels – especially below the key $1294 level (down trendline from 2/20 $1347 high).

Dollar downed – 3 reasons for the USD selloff and why it cannot last:   https://www.fxstreet.com/analysis/dollar-downed-three-reasons-for-the-usd-sell-off-and-why-it-cannot-last-201905311513?utm_source=onesignal&utm_medium=push&utm_campaign=analysis 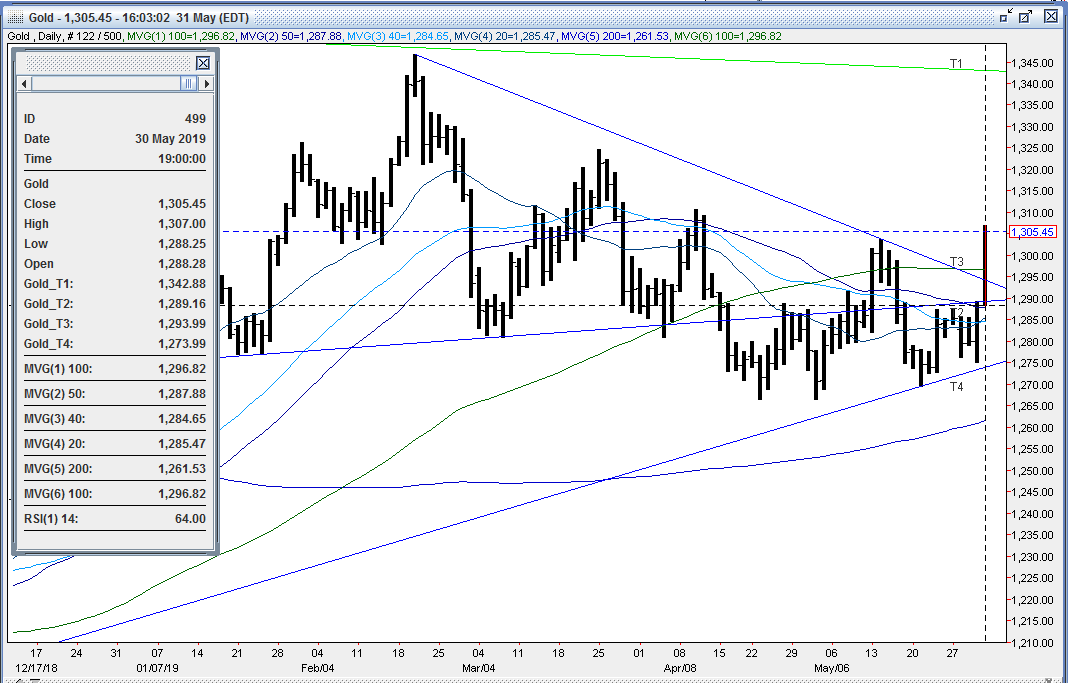 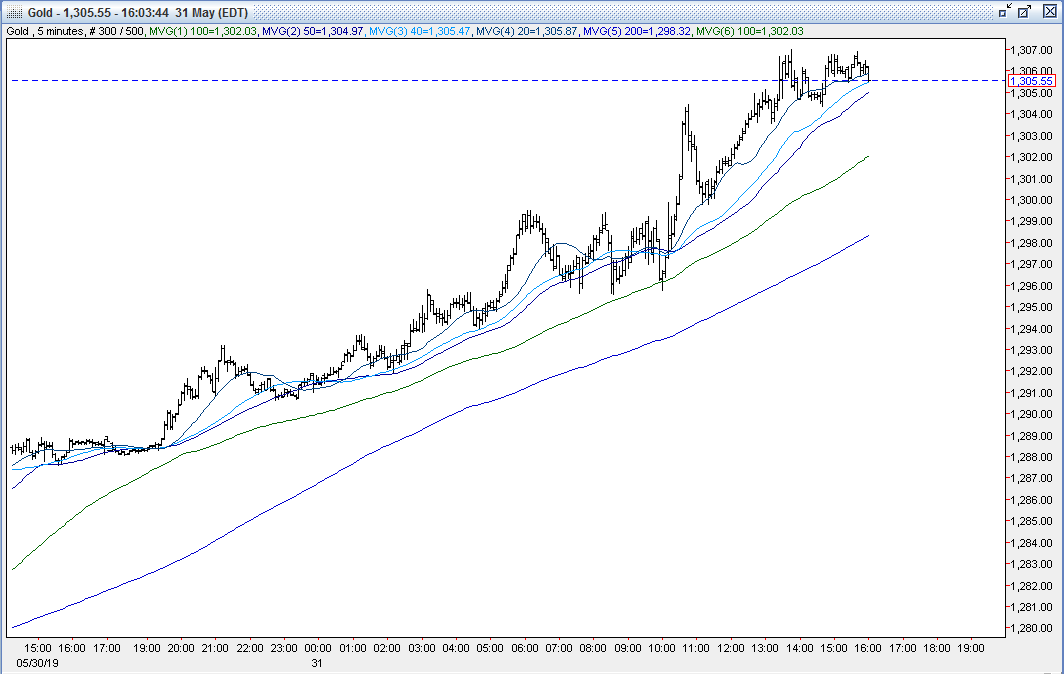 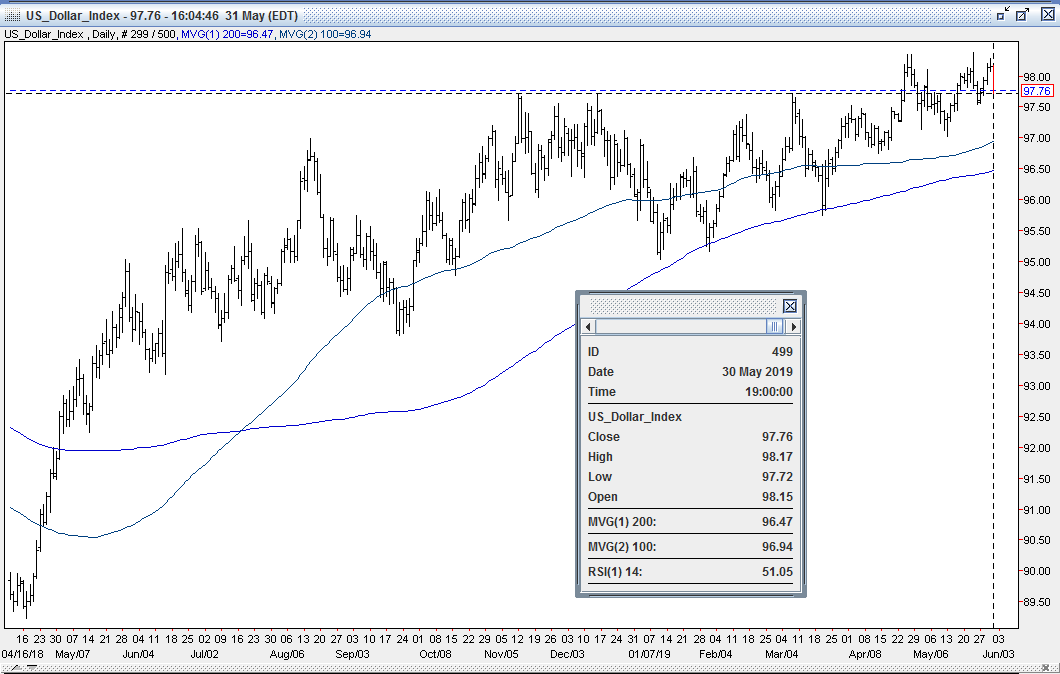 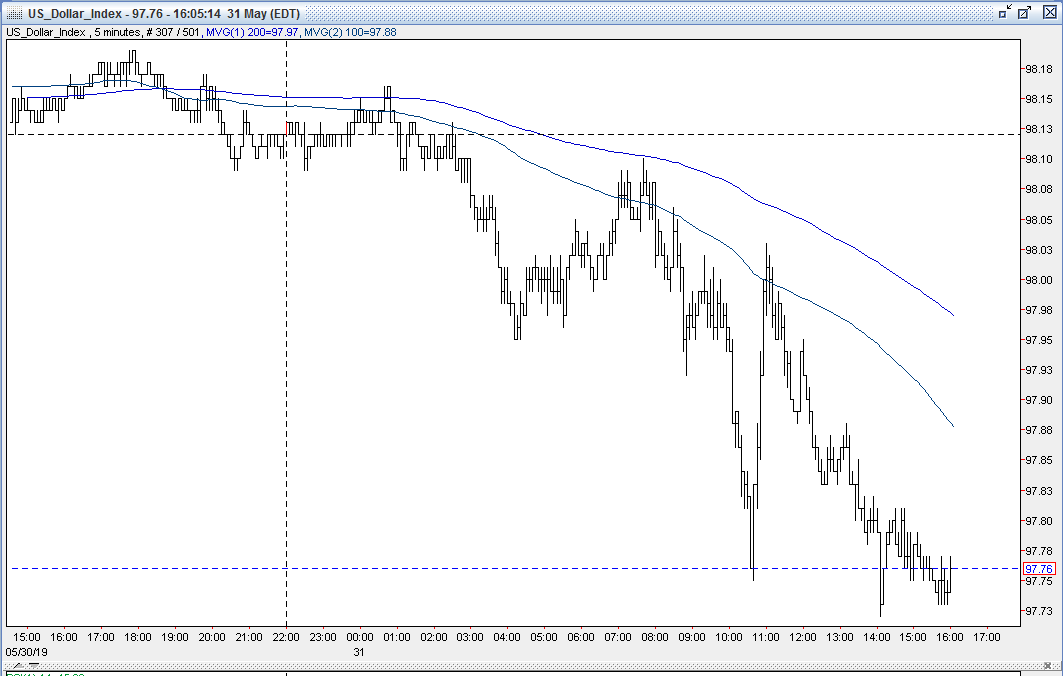