·        Gold was nervous and choppy last night, trading in a range of $1504 - $1517, fading the volatile moves in S&P futures from conflicting reports on progress / stalling in the US –China trade talks.

·        The move faded a dive in S&P futures (-37 to 2882) off of a report from the South China Morning Post citing no progress in deputy level talks (Chinese refuse to talk about forced technology transfers), and that Liu He and his team may leave earlier than expected.

·        Gold fell back to its $1504 low later during later Asian and early European hours on a report from Bloomberg that the US was considering a currency pact with China as a portion of a partial deal where next week’s scheduled tariffs would be suspended, which lifted S&P futures (+3 to 2922), and took the US 10-year bond yield up from 1.549% to 1.594%.

·        A decline in the US dollar (DX from 99.10 – 98.65) helped limit gold’s downside, however.  The greenback was pressured by strength in the euro (ECB minutes showed opposition to QE, overcomes weaker German Trade Balance) and the pound ($1.2202  - $1.2265, some Brexit optimism overcomes weak UK GDP and Industrial Production).

·        However, some selling emerged from players disappointed with the tame inflation numbers and gold quickly retreated through the overnight low ($1504) to reach $1501, where support in front of $1500 (yesterday’s low) held.

·        Comments from the Fed’s Kaplan were balanced (waiting to cut rates until consumer spending weakens would it be a mistake, but reducing borrowing costs too much could cause imbalances and excesses, and didn’t think the Fed was at the beginning of a “full fledged cutting cycle”).

Trump announces he will meet with Liu tomorrow – stocks rally, gold sells off to $1492

·        Shortly after the equity opening, news that Trump would meet with Liu He tomorrow (confirming the delegation won’t cut short their visit) sent US stocks soaring (S&P +29 to 2948).

·        Gains in trade bellwether Caterpillar and the Industrials, Financials, and Materials sectors led the rally.

·        Open interest was up 3.0k contracts, showing a net of new longs from yesterday’s advance.

·        However, some bulls were relieved that today’s decline wasn’t more severe – given the rally in stocks and climb in global bond yields

·        Benefitted from the recent escalation of the ongoing trade war between the US and China (US expands blacklist, contemplating limiting Chinese stocks in government funds, blocks visas on Chinese officials; China contemplated cutting short its US visit, toned down expectations of the talks, Liu He not carry the “special envoy” title)

·        Despite Powell and the Fed not projecting as dovish as some would have liked at their last meeting, he was somewhat more dovish in the past two days, and markets are still anticipating the Fed is in an easing mode

·        Probabilities of future rate hikes have increased in recent days off of the weak US economic data (especially large misses on both ISM Manufacturing and ISM Services) - Fed Fund Futures show:  80.7% chance of a 25bp cut at the October meeting, a 38.1% probability of two 25bp cuts by the December meeting, and a 13.5% likelihood of three 25bp cuts by the January meeting - and bulls see a rate cutting environment one in which gold can flourish

·        See the prior week’s price action (dip to $1459)  / Commitment of Traders data as a healthy pruning of weaker longs, and see the current market better positioned to move higher

·        Feel that markets are back to overestimating the probabilities of future Fed rate cuts, feel that the downward pressure on bond yields was also overdone, and that a modest reversal should allow the US dollar to strengthen further against other currencies as they feel the dollar still remains the “cleanest dirty shirt in the laundry basket” with the US as the sole global growth engine. Recent soft data for both Germany and the Eurozone (weak German Trade Balance today) that drove the German 10-year yield further into negative territory over the past months (German bund yield remains negative and not far from record lows of  -0.743%) underscores this view.

·        Feel a US-China trade deal is in both sides’ best interests, and feel that the recent agreement to resume negotiations this week and future similar conciliatory actions (today’s confirmation Trump will meet with Liu He tomorrow) will be viewed as positive steps by markets, which should help equities to continue to rebound and will putdownward pressure on the yellow metal. 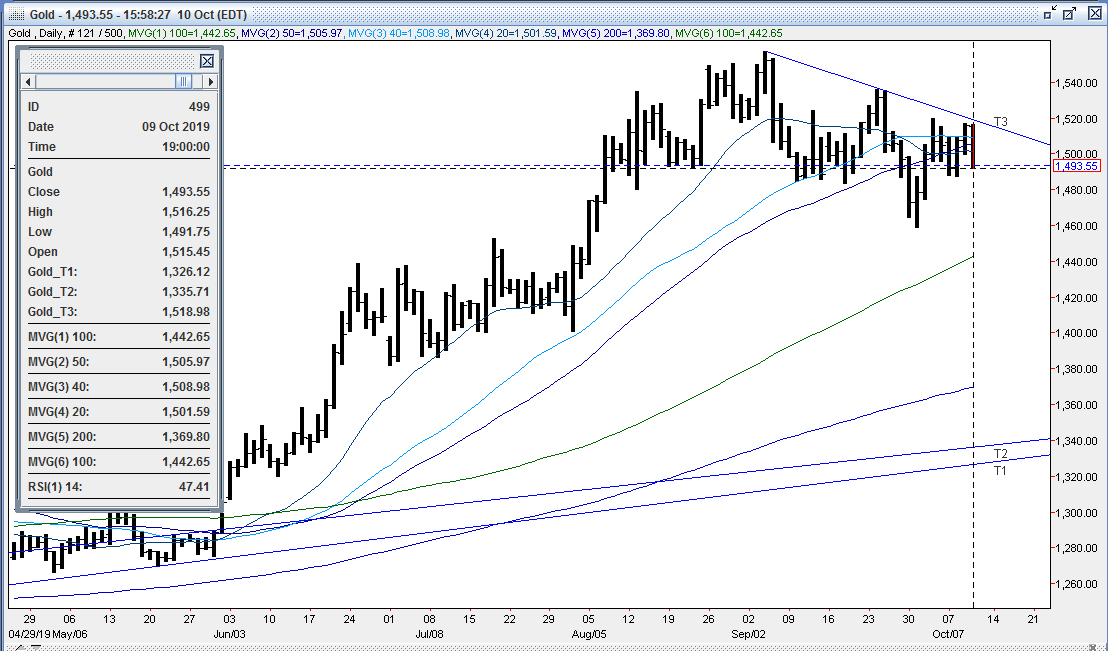 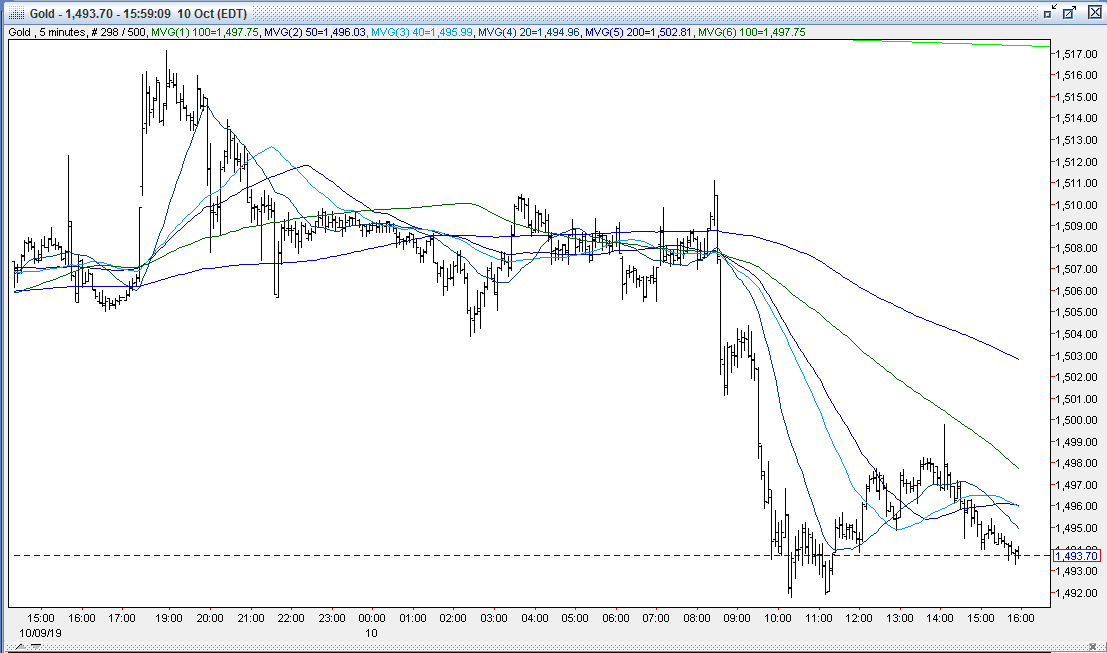 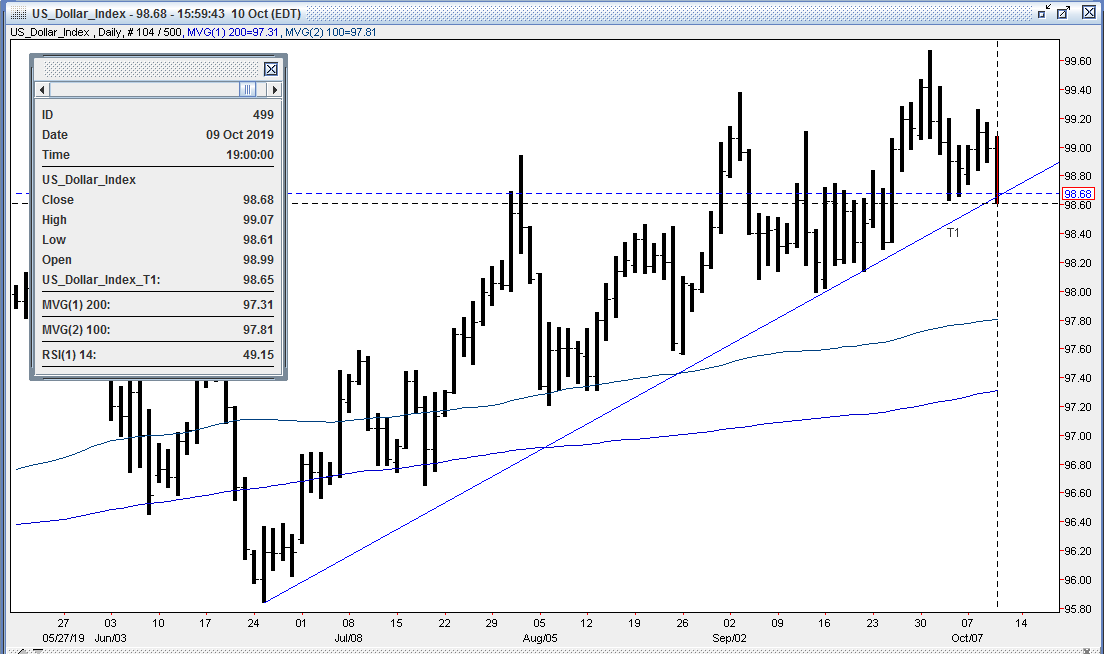 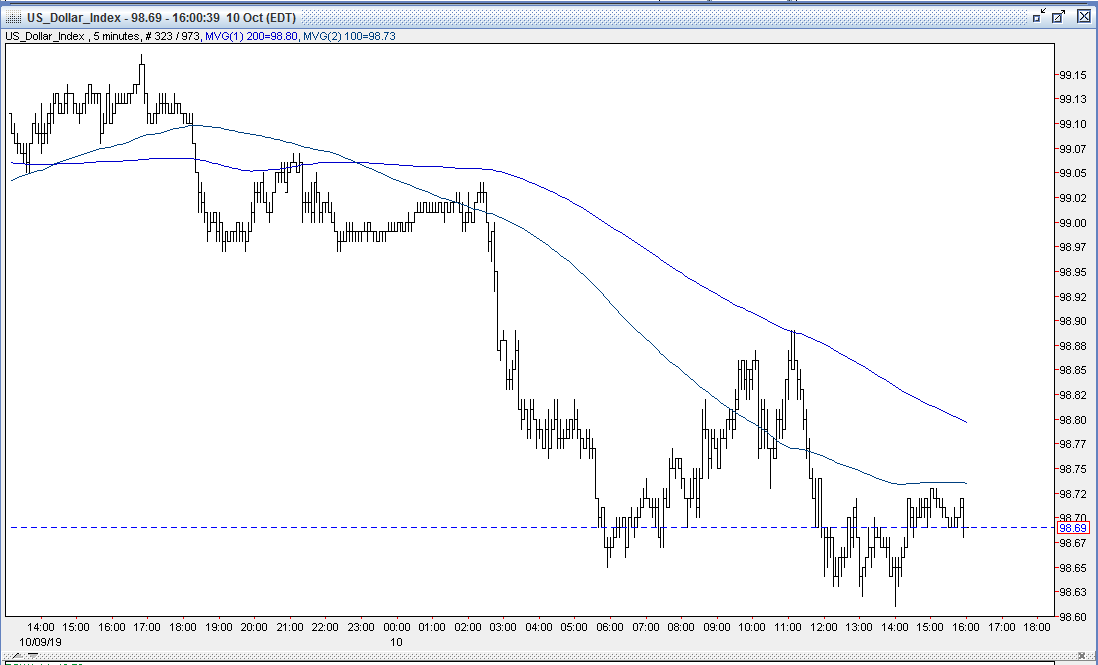