Here’s Why $5,000 Is a LOW PRICE for Gold—Mike Maloney and Ronnie Stoeferle Video #4

Why is Mike Maloney so heavily invested in gold at this time in history? And why does he believe prices are headed substantially higher?

The answer starts with a chart…

As Mike and Ronnie discuss in their fourth video, this chart shows the amount of US base currency vs. the market value of US gold reserves. 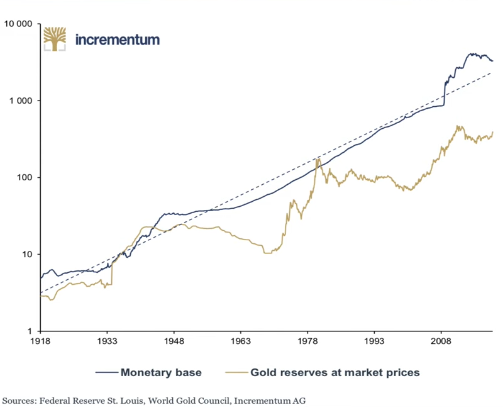 As you can see, the value of gold has “caught up” to the amount of the base currency twice in the past 85 years.

The first during the Great Depression and the second in 1980.

Based on the extent of currency abuse in the US, Mike and Ronnie believe we’re on the cusp of another catch up. And that catch up would require much higher gold prices to match the amount of base currency in existence.

Here’s another insightful way to look at it. This chart shows the percent of base currency that is covered by gold reserves. 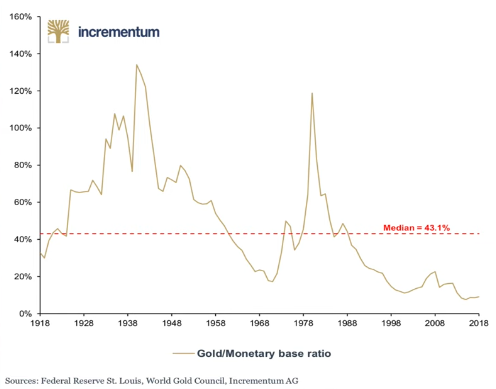 As you can see, the ratio is near all-time lows! This shows just how cheap gold is relative to the amount of US currency at this point in history.

Mike and Ronnie aren’t the only ones who’ve noticed this. Central banks purchased the most gold this past year since 1971. As Ronnie says, “something is clearly going on behind the scenes with central banks.”

Further, gold ETFs holdings are at their highest level ever. Not only that, Ronnie says he has noticed that more and more institutional investors are shunning bullion ETFs and buying physical metal. They would only do that if they felt the environment ahead demanded they own bullion outright and not a paper representation. It would be wise for us to follow their lead.

Because after decades of money printing, there’s more base currency today than any other time in history.

And in a currency crisis, in an environment where gold is once again bid up to match the astronomical amount of currency, there will be a rush into gold. As Mike says, “once it gets going, once there’s a rush, gold could easily pass $5,000.”

Could we be on the verge of another currency crisis? If history is any indication, it’s could be coming sooner rather than later, and when it does, it will likely happen very quickly.