At any given time, in all trade in all places around the world, there is finite capacity. In material inputs, labor, finished goods. The limits to all of these factors change, but they always have limits.

At present, there is no finite capacity for US dollars. Any system based on a discrete pool of supply in a limitless ocean of monetary demand is broken from the start, and when you add the non-economic political aims of central banks, it’s a wonder the system has remained this functional this long as it blithely chugs its way toward oblivion.

Let's stipulate right off the bat that trade is not necessarily win-win--the winners (corporations, financiers and the financial sector) have skimmed the majority of the gains, leaving the losers with a few pennies of dubious value. 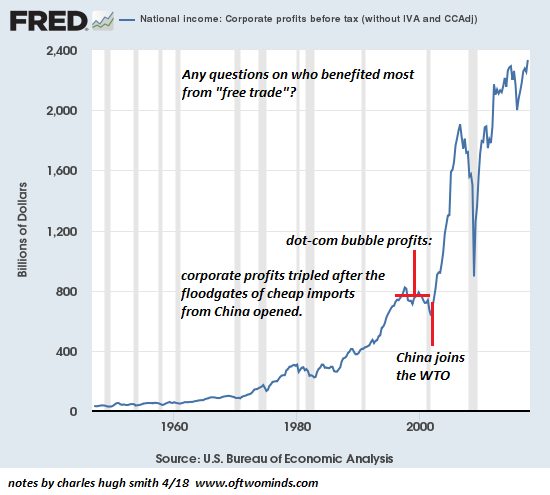 Consumers' got a nickel in savings and a disastrous decline in quality, while corporations reaped 95 cents of additional profits:

Central bank policies don't just distort domestic economies, they distort global trade, which parallels domestic distributions of winners (a few at the top) and losers (everyone else).

Trade is intertwined with currencies. China has used its currency peg to the USD to avoid being exploited; China has followed a "Goldilocks" strategy that keeps its currency, the yuan/RMB, in a narrow range: not too costly, not too cheap.

The imbalances, distortions and inequalities are manifesting in trade disputes and conflicts, manifestations made inevitable by central bank-driven financialization and perverse incentives to maximize short-term profits at the expense of the citizenry, the nation and the productive economy.

ORIGINAL SOURCE: Were Trade Wars Inevitable? by Charles Hugh Smith at Of Two Minds on 4/9/18