The current US economy is like 100 cars flying down a fog-shrouded highway at 80MPH with two feet of visibility. Everyone is all-in, bullish as can be, and simply hoping against hope that nobody in front of them hits the brakes.

The Federal Reserve is the communal foot on the gas. Their massive QE campaigns have injected titanic liquidity into risk assets and kept the stock market free-floating into bubbled-out valuation territory for years on end.

And by pursuing a zero (or nearly zero)-interest-rate policy for the better part of a decade, corporations and consumers alike were heavily incentivized to leverage themselves to the extreme.

After all, if you’re a household, the perceived risk of additional debt is usually measured in how much interest you’re going to have to pay on it. When those amounts are being calculated based on a fed funds rate near zero, borrowing $50,000 doesn’t cost much more than borrowing $5,000. Until rates go up.

Likewise, corporations will seek to borrow every penny they can when it’s next to interest-free: it’s easy to justify rampant business expansion or increased marketing campaigns with lowest-in-history cost of capital.

And those companies who are floundering so badly that they can’t generate any profits at all require this same cheap debt simply to pay for their past debt obligations, while their operational results continue to decay. These are the zombie companies that a free market, absent nanny-state-provided, easy-money-policy loans, would have been unceremoniously driven out of business long ago.

What’s more, the federal government is now incredibly dependent upon stock market capital gains taxes for overall tax revenue. If the market corrects substantially and most investors lose money, there goes a giant chunk of US federal income that already falls well short of being pay for all of our current-year outlays, let alone coming anywhere close to being able to start paying off the massive debtload we’re already incurred: 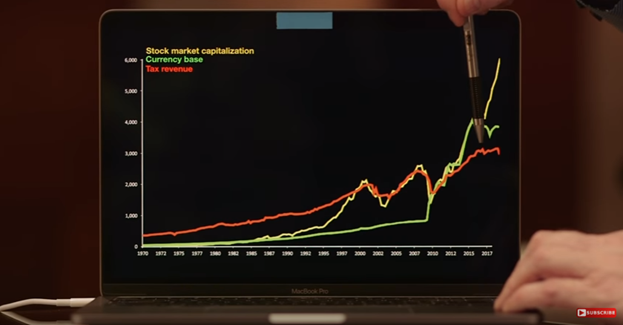 So now we find ourselves in the longest economic expansion in history. Make no mistake, this non-recovery recovery has been driven by one thing: central bank market interference.

What does this indicate to the irrationally, perpetually optimistic and self-serving Congressional Budget Office? That we won’t have one until 2029. Over 10 more years from now.

Is it any wonder that these politicians, who themselves get elected by promising free stuff we can’t afford to pay for, are this detached from the stark reality of what is to come?