The Gold Silver Ratio: It's Silver's Turn to Shine

I't looks to be that time again for the GSR (Gold:Silver Ratio) pendulum to swing once again in Silver's favor. It's a good way to know when silver is going to out perform gold and some people even use it to trade out of gold and into silver.

Is Silver undervalued compared to Gold? Here's what Lawrence Williams has to say on this phenomena;

When the gold price advances, silver tends to do even better in percentage terms.

The Gold:Silver Ratio (GSR) is a great indicator of silver price trends and in recent days it has fallen below 70 and is testing 69. 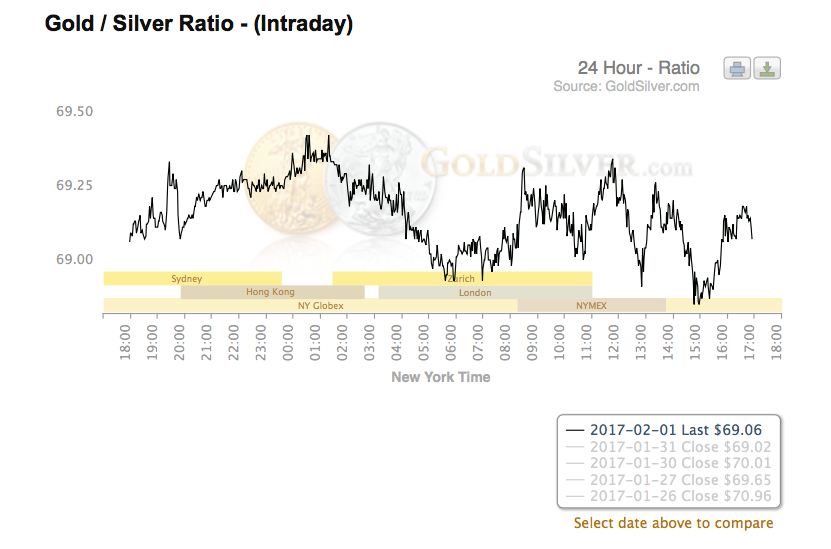 When the gold price is strong, silver tends to do better and the gold:silver ratio (GSR) comes down accordingly. But recently, amidst all the President Trump Executive Order shenanigans gold has been playing something of a waiting game. Over the past few days it has indeed been picking up a little and has today moved through the $1,200 level on the upside again, but overall, since President Trump took office, gold has slipped back quite sharply, assisted by an unhelpful statement from Fed Chair Janet Yellen effectively reiterating that it is still likely that the Fed will raise interest rates three times this year and is aiming for a 3% interest rate by 2019 which it sees as normality.

There have been some commentators, notably Jim Rickards, who has quite a following among the gold investment sector, who feel the Fed may implement its next increase as early as at its March meeting and we await guidance from the FOMC meeting taking place today and tomorrow as to whether this is indeed likely. We think not given the divisiveness of President Trump's policies so far - indeed the extent of opposition the new president appears to be generating within his own party, as well as virtually blanket condemnation from the Democratic ranks, suggests turbulent times ahead in respect of legislation requiring Congressional approval, which are bound to spill over into the markets and the economy as a whole.

But what has been apparent, particularly to the silver investor, is that the GSR has been coming down over the past few days despite the gold price still being some $20 lower than it was immediately after the new President took office, although it is picking up today. As I write the GSR is sitting at 69.07 despite it starting last year at around 73. We have been more bullish on silver, and the good silver stocks, than on gold looking ahead and it should be noted that our top precious metals stock pick for 2017 (See: 2017 Predictions - Gold, Silver, PGMs, The Dollar, Markets and Geopolitics..) - Hecla Mining (NYSE: HL) is already up 14.4% year to date and with the silver price rising nicely might well pick up even more today unless precious metals see yet another take-down. At the time of writing, silver itself is up 9.7% year to date, while gold is up 4.7%.