“The Price of Ham is Too Long”: Venezuela Inflation vs. Cash Registers

Nobody who lived in Rome thought the Roman Empire would ever fall. Too big to fail. Too dominant. And then military overexpansion and currency dilution felled the goliath.

To most Americans, Venezuela might as well be Mars. Never been there, have nothing in common with it, can’t find it on the map. But the problems besieging it are the same immutable mathematical truths that bedeviled Rome, and the very same seeds of hyperinflation and social unrest are well-rooted in our fiat-currency system as well.

Living in Venezuela, you get used to hearing that, but the story behind the missing ham was different. It’s not that supermarket managers were having trouble finding enough to sell—the typical cause of shortages ravaging the country—they had decided to stop ordering it. The reason: After years of hyperinflation, the price is too long.

The store’s deli scales run to only six digits. And ham is retailing nowadays for about 1,480,000 bolivars per kilogram. It didn’t matter that I wanted only a few hundred milligrams. The cost was, at this market at least, incalculable. 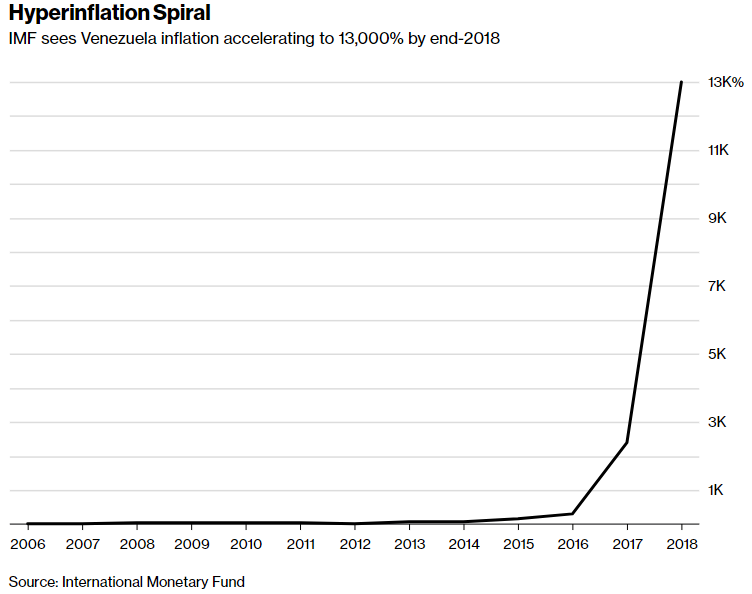 A similar dynamic is impeding the use of credit and debit cards. Even a slice of lasagna (401,450) can’t fit on the screens of older card machines; the solution is to split one purchase into several transactions. Even the invoice printers that many businesses use for reports to tax authorities are running out of space.

It would seem to be only a matter of time before the Maduro regime opts to reset the value of the currency to ease these logistical headaches. It’s been 10 years since officials first tried such a move, lopping off three zeros and rebranding it “the strong bolivar.”

Bloomberg’s gauge, the Cafe Con Leche Index, estimates that inflation has been running at an annualized pace of more than 82,000 percent over the past three months.