Keep a close eye on the scale of the chart below; this is the tip of the tip of the iceberg in terms of Fed unwind. Years more to go, and should we see a steep correction in the markets, highly likely the unwind will rewind in a hurry.

The QE Unwind is ramping up toward cruising speed. The Fed’s balance sheet for the week ending May 2, released this afternoon, shows a total drop of $104 billion since the beginning of the QE Unwind in October – to the lowest level since June 11, 2014.

During the years and iterations of QE, the Fed acquired $3.4 trillion in Treasury securities and mortgage-backed securities. The mortgages underlying those MBS are guaranteed by Fannie Mae, Freddie Mac, and Ginnie Mae.

The “balance sheet normalization,” as the Fed calls it, was nudged into motion last October. But the pace accelerates every quarter until it reaches up to $50 billion a month in Q4 this year. 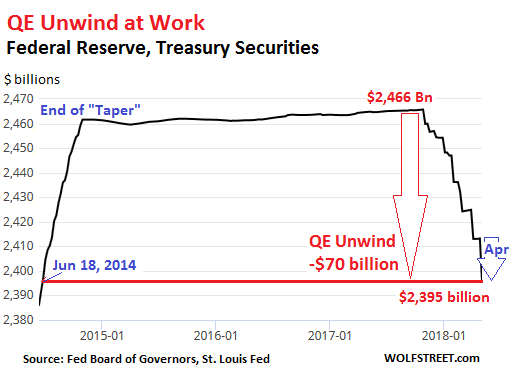 The pace of the QE Unwind has accelerated sharply in April, as planned. And it’s unlikely that the Fed will try to prop up the stock market by pausing its QE Unwind machine, even during a sell off. The Fed is targeting “elevated” asset prices, and sell-offs are part of the deal, as long as panic doesn’t freeze up the credit markets, as it did during the Financial Crisis.

But currently, credit market conditions are ultra-loose as a result of years of QE and zero-interest-rate policy. So the QE Unwind has a big job ahead to reverse part of what QE has done, which is what “balance sheet normalization” ultimately means.