Did you know that holdings in gold ETFs have been spiking?

This chart kicks off video #7 with Mike Maloney of GoldSilver and Ronnie Stoeferle of the In Gold We Trust report… it shows the renewed interest in gold from investors around the world. 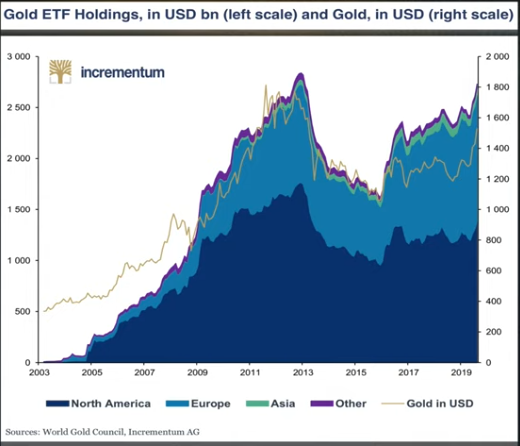 You can see that the light blue area, which represents European ETFs, has expanded the most.

To Ronnie the jump in ETF holdings means gold is on its way to becoming a core asset to general investors again. The amount of demand they could bring into the gold market is enormous.

But it’s about more than just ETFs… Ronnie and his team talk to everyone about gold, from central bankers and institutional investors to individual investors and Uber drivers—see how he classifies the three types of investors and what it means for gold demand going forward.

Mike and Ronnie also discuss the concept of gold’s inflation-adjusted high. Ronnie relates an interesting story, where he told investors back in 2006 that his long-term target for gold was $2,300, at a time it was trading at $500. While many thought he was crazy, he argued that that was simply adjusting the price for inflation.

While inflation has continued growing since then and thus suggests a higher price target, he says that in bull markets “inflation-adjusted highs always get taken out.”

This means that on an inflation-adjusted basis, gold is still dirt cheap.