When the Can Won’t Be Kicked: Public Safety Layoffs to Fund Pensions

It’s starting to get real. There has been so much ink spilled regarding underfunded pensions and municipal bankruptcies, but outside of so much journalistic hand-wringing, it’s been pretty easy, like with the ever-escalating federal debt, to say, “So what?”

Harvey, Illinois is being forced to fire cops and firefighters in order to meet unfunded pension obligations. In Harvey, unfunded debt obligations, suddenly and in a real-world way, matter a lot.

You’d be mistaken to think Harvey, Illinois has a unique pension crisis. It may be the first, and its problems may be the most severe, but the reality is the mess is everywhere, from East St. Louis to Rockford and from Quincy to Danville. A review of Illinois Department of Insurance pension data shows that Harvey could be just the start of a flood of garnishments across the state. 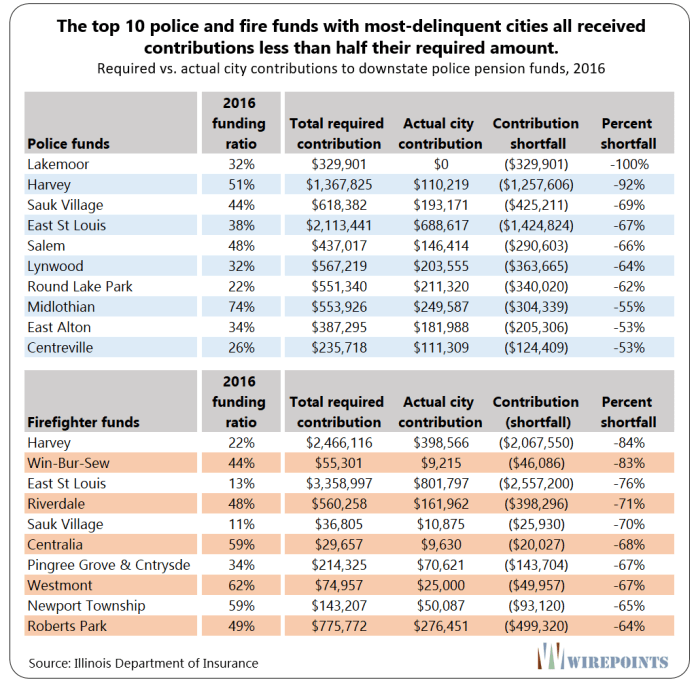 Harvey made the news last year when an Illinois court ordered the municipality to hike its property taxes to properly fund the Harvey firefighter pension fund, which is just 22 percent funded.

Now, the state has stepped in on behalf of Harvey’s police pension fund. The state comptroller has begun garnishing the city’s tax revenues to make up what the municipality failed to contribute. In response, the city has announced that 40 public safety employees will be laid off.

Under state law, pensions that don’t receive required funding may demand the Illinois Comptroller intercept their municipality’s tax revenues. More than 400 police and fire pension funds, or 63 percent of Illinois’ 651 total downstate public safety funds, received less funding than what was required from their cities in 2016 – the most recent year for which statewide data is available.

If those same numbers continue to hold true, all those cities face the risk of having their revenues intercepted by the comptroller.

ORIGINAL SOURCE: Harvey, the first domino in Illinois: Data shows 400 other pension funds could trigger garnishment by Ted Dabrowski and John Klingner at Wirepoints on 4/16/18