A Nervous Market Gets Skittish in Its Prelude to Downside Stampede

If you’ve never seen an out-and-out cattle stampede in person, it’s difficult to convey the power and the dynamics that drive it. But I’ll try.

First, you get a general sense of restlessness in the herd. The cattle snort, get jumpy, sway their heads…they’re nervous, and none of them are really sure why, except the rest of them seem to be nervous too. Which makes them all more nervous. Which makes them more agitated.

Then little pockets of cattle will start to lurch, move quickly, but not much, in one direction. They all get skittish, trying to figure out if this is really going to happen or not. The noise increases. You can almost feel the heat rise as the stress levels rise.

Then it breaks one way or the other. They all settle down, or one animal panic and really makes a break for it. Then, usually, it’s on. The other animals don’t know why this one decided to sprint in a mad dash in one direction, but they might not have time to think. It might be a predator. So more follow, and then all hell breaks loose.

They all go charging, thousands of tons unthinking panic, in one direction. Then they eventually stop. The reason they all stampeded, 99% of the time, is simple mass psychology. Plain primal fear. Driven by perception and nothing more.

It may be Italy, it may be something else. But the market is in the sidelong-glancing nervous phase right now. Something will spook someone enough that we see a gap-down plunge. Where will it stop, driven by algorithms blindly following? Anyone’s guess. 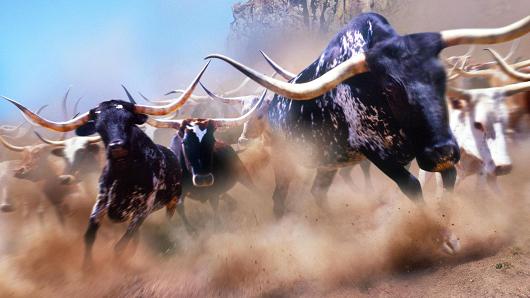 There could be bigger upside the more investors realize the full and global implications of Italy’s political turmoil.

Italian government bond yields surged dramatically following President Sergio Mattarella’s decision to block the opposition parties’ pick for economic minister, a euroskeptic who supports Italy’s exit from the eurozone. The two-year bond in particular plunged the most since the creation of the bloc’s common currency in 1999.

The country’s public debt currently stands at 132 percent of GDP, and ratings agencies are reviewing a possible downgrade of its credit rating. Should it default on its billions of dollars in loans, a chain reaction could quickly spread to financial markets all over the world.

This is a worst-case scenario, but it’s for these reasons I think it’s prudent to have a 10 percent weighting in gold.

ORIGINAL SOURCE: Spinning Italy's Distressed Debt into Gold by Frank Holmes at US Funds on 5/30/18