You need increasing demand for good and services to power an economy. At the most basic level of this equation, you need more people making more money. Then you need them to spend that money, not save it. But that’s putting the cart before the horse.

You can’t have more people making more money if you don’t have more people. The effects of China’s one-child policy are starting to ripple through its economy. And, of course, they’re turning to the United States Fake Demand Playbook to prop it up. Debt, debt, and more debt.

Up to 2000, China had undertaken just $2 trillion in total debt as population growth was robust, driving demand higher.  However, since '00, when China's under 65yr/old population growth dramatically slowed, China has pushed out $38 trillion in new debt (primarily to its corporations) that has (and still is), in turn, built massive new debt-fueled capacity for a collapsing domestic and global consumer base...what could go wrong? 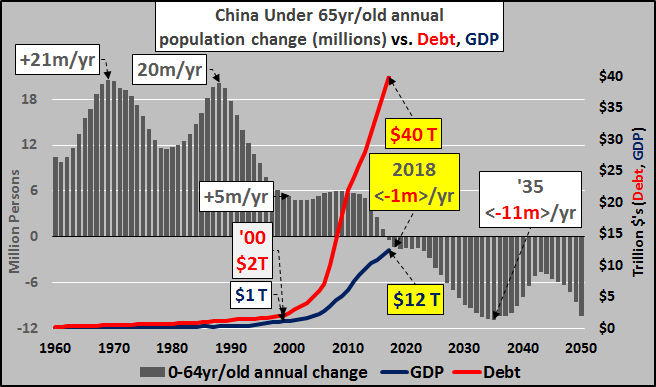 And now that the consumer base is shrinking, the debt issuance and resultant further build out in new capacity, apartment blocks, shopping malls, etc. etc. is likely set to go into a final mal-investment overdrive.

So, China's births have been collapsing for decades, China's childbearing population is now collapsing, and so it follows that China's domestic markets have begun shrinking and this shrinkage will only continue to accelerate.

From my viewpoint, no way in hell does this add up to 800+ million Chinese moving into the "middle class" by 2030, regardless how many trillions China throws away building new factories, roads, apartment blocks, and infrastructure for a population that is never coming!