Give credit to Dalio for addressing the elephant in the White House. Trump’s agenda is not clear because it does not exist. His decisions are based on whoever upset him last and whatever he last watched on television.

To ponder his “strategic objectives” is to try to assign higher meaning, longer-term tactical thinking, shrewd maneuvering to further ultimate goals, to a kindergarten sandbox fight of the reality-TV-show ilk that suited him so well.

It’s not a temperament or operating procedure well-suited to the presidency. Especially in an economic battle with a country that holds the definitive debt-ownership upper hand.

As the anticipation for a US and China trade war continues, market participants are beginning to plan accordingly. As initially reported by Bloomberg, investors are starting to flock to gold as holdings hit their highest level since 2013.

Clearly, the market is beginning to price in a trade war between two of the world ’s largest economies, and many fear the aftermath could be rampant inflation. 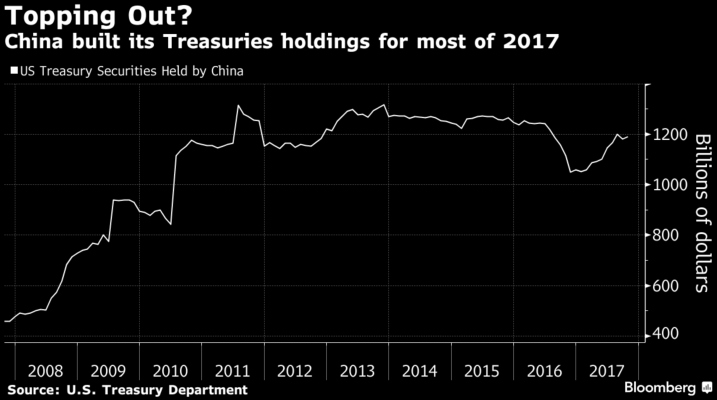 Most notably, the head of world’s largest hedge fund Ray Dalio recently laid out his concerns about this trade war. “I’m worried and forced to look harder at the question of where Donald Trump is leading us. What is his real agenda? Right now, I don’t think it’s clear to anyone, including some of the people closest to Donald Trump, what exactly his strategic objectives are.”

Dalio has also issued his concern with the fact that China could retaliate with its $1.2 trillion of U.S. Treasury bonds.

If China begins to unwind its treasury position then interest rates would be pushed much higher, so not only is Dalio worried about a trade war, but a “capital war.”

“We should think beyond trade wars to consider the possibility of other types of wars. to whatever extent anyone believes that the US has the advantage in a trade war because it has a big deficit (so it has more to gain) one could say the same for China in a capital war because it has the bigger deficit.”

ORIGINAL SOURCE: Trade War Fears Are Creating a Rush To Gold ETFs by Lawrence Thomas at The Gold Telegraph on 4/11/18