Significant market reversals embody the phrase “It is darkest before the dawn.”

When speculator sentiment gets overwhelmingly bullish, when bad news drives markets higher and they seem like they will never fall again, it’s time to sell.

When speculator sentiment gets overwhelmingly bearish, when markets fall no matter what the headlines and you’re positive they will never turn sharply higher, it’s time to steel your resolve and buy.

Frequently one hears comments like "commercial reduced their short positions".

While arguably accurate, it conveys the wrong idea. 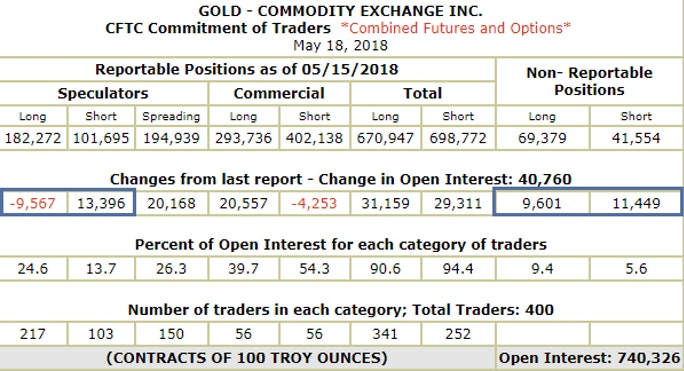 Thus it is a more accurate summation to call this for what it is: Long liquidation. Gold longs are increasingly unconvinced and are throwing in the towel.

I believe speculators throwing in the towel and betting against gold is ultimately bullish.

ORIGINAL SOURCE: Speculators Throw in the Towel on Gold by Mike Shedlock at The Maven on 5/18/18