Despite 10-Year “Recovery”, US Small Businesses in Secular Decline

Not everything is tech. Not everywhere is Palo Alto.

One of the problems with the burgeoning wealth gap is that the wellbeing of a nation, on the whole, can get wallpapered over by “average” statistics. If you have one millionaire and nine broke people, you have ten people with an average net worth of $100,000.

American small businesses across the country are failing at an alarmingly faster rate than new businesses are succeeding in more metro areas than not.

The chart below shows the number of metro areas out of 336 where the business death rate exceeds the business birth rate. 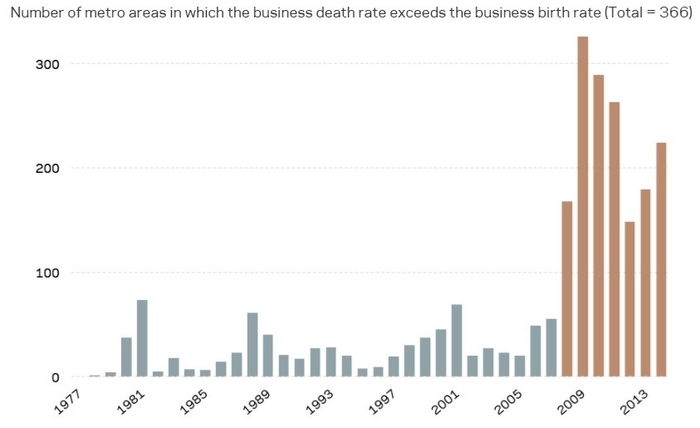 Years after the recession the death rate still exceeds the creation rate for more cities than in the past few decades.

This gets back to our first point. If you’re not growing, you’re dying.

America’s trend of fewer startups and small businesses is a long-term secular problem which has originated as a result of high student debt which affects both young adults and their parents, a lack of economic stability, and greater barriers to entry in business as a function of more regulations and higher startup costs, despite the internet and technology as a whole being so ubiquitous in the United States.

ORIGINAL SOURCE: The US Is In Secular Economic Decline at UPFINA on 4/27/18