Murphy’s Law, applied to gold and silver: the price will fall right after you buy.

New GoldSilver Law: it doesn’t matter. Prices will be a lot higher in a couple years (and you should focus on how many ounces you own anyway).

As you’re about to see, this decline is completely normal. That’s not me saying so; that’s what history shows.

I have some data on corrections I want to share with you. The reason I’m sharing it is because I want us all to be prepared for what’s ahead…

The following charts look at the size and frequency of corrections during gold’s two biggest bull markets in modern history. First up is the 2001-2011 run. Look how many corrections there were and how big some of them got. I added our current pullback so you can put it in perspective. 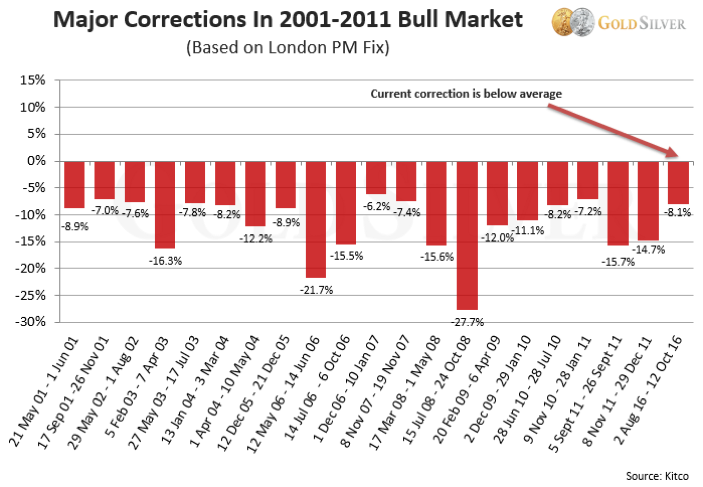 In the bull market that saw the gold price rise a total of 645%, there were 19 corrections of 6% or more. Ten were in double digits.

The average of all those corrections was 12%. That means our current pullback is, so far, relatively minor by comparison.

Corrections are normal even during manias. Here's a chart of the pullbacks that occurred during the final two years of the 1970s parabolic advance. Notice not just the big drops but how quickly they occurred. 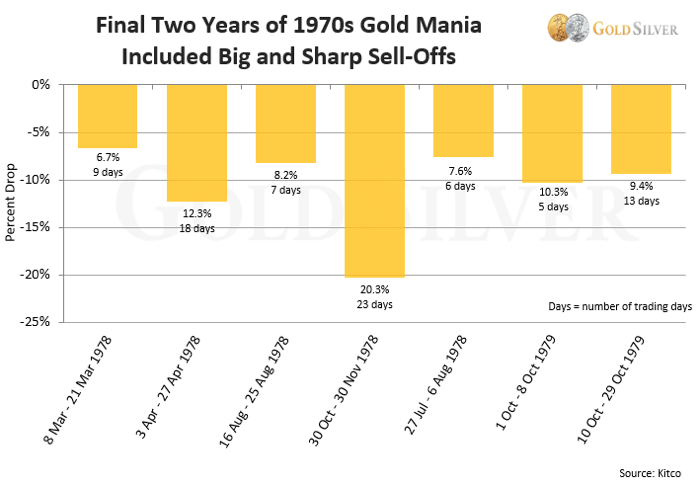 During the final phase of the gold mania—at a time when the price rose 392% in just 24 months—there were seven big pullbacks. The average was a 10.1% decline every three and a half months. And they were all very sharp—four lasted less than ten trading days, and all were over in less than a month.

So, in the two biggest gold advances in modern history, price corrections, even big ones, were completely normal.

This information gives us power…

There are three distinct facts we can take away from this data. If you tend to worry when the gold price falls, you may find the following points useful as we progress through what Mike and I are convinced will be a gold advance of historic proportions…

#1. We will never say goodbye to corrections.

History shows that volatility, both up and down, is normal during bull markets, even manias. What this means is that while we can’t predict when they’ll occur, we know going in that they’re gonna happen. So before we exit this sector, understand that we will see some big and sharp corrections. Prepare your emotions accordingly.

In other words, daily and even monthly fluctuations are nothing to fret over. Viewed on a long-term basis, corrections are nothing more than one step down before the next two steps up. This fact reminds us to keep the big picture in mind.

If you don’t have as much gold and silver as you need, every pullback should be viewed as your chance to buy them on sale. It’s an automatic discount on what you want to buy anyway.

Francisco Blanch, head of global commodities and derivatives research at Bank of America Merrill Lynch: “Investors should use the recent drop in gold prices as a buying opportunity… once the US central bank decides to raise interest rates, potentially causing equities to sell off and the dollar to rally, investors will see gold prices stabilize and eventually trend higher.”

Goldman Sachs analysts Jeffrey Currie and Max Layton: “We would view a gold sell-off below $1,250 as a strategic buying opportunity, given that substantial downside risks to global growth remain, and given that the market is likely to remain concerned about the ability of monetary policy to respond to any potential shocks to growth.”

Joni Teves, UBS strategist: “We think the recent price correction and sizeable decline in positioning improves the risk-reward for gold, allowing those who are looking to build longer-term gold exposure to build positions at better levels.”

Chris Gaffney, president of World Markets at EverBank: “the recent drop is overdone… Several factors can put a floor under gold in the short term, including increased tensions in Syria, the end of cooperation between Russia and the US, Brexit, and political uncertainty in the US.”

Ross Norman, chief executive officer at Sharps Pixley: “It is clear to us that the rationale for buying is more powerful than any time in living memory.”

That last quote is my favorite.

Mike Maloney agrees, but takes it one step further… as he shows with sharp clarity in Episode 7 of the Hidden Secrets of Money, what is almost certainly ahead promises to be not just the greatest crisis in history but also the greatest wealth transfer. But only if you own physical gold and silver.

The Ultimate Question to Ask

So, does that mean we should buy now? What if the correction isn’t over?

Instead of focusing solely on price, I think this is a better question to ask:

Do you have enough ounces to withstand the fallout if Mike is right about what’s coming?

Focus on how you and your family would be impacted in a crisis, and how you will deal with it. Any reasonable assessment of global financial affairs points to the need to have a lot of bullion at this point in history.

If even just a portion of Mike’s predictions come true, worrying over a few dollars for gold or a few cents for silver will be meaningless and long forgotten.

Buy enough gold and silver so that your fort is ready for all arrows—deflation, inflation, economic recession or depression, central bank blunders, government interference, war, helicopter money, a crashing currency, a monetary reset, capital controls, and any other scenario that could wipe out you and your family’s wealth.