France, Russia, China, IMF in Accord Against Trade War Sanctions

The world is unified in its response to trade war rhetoric and sanctions: They make no sense and damage all involved. They get it the way of free markets and economic prosperity domestically and abroad. Short term bluster accomplishing nothing of real value.

France, China, Russia, the IMF. Ramping debt to pay for interest on past debt while choking off free trade with the global partners while hiking interest rates is a dangerous and nonsensical doctrine. Russia continues to add gold to its sovereign reserves at a faster rate than any other nation, gearing up for a challenge to USD hegemony. 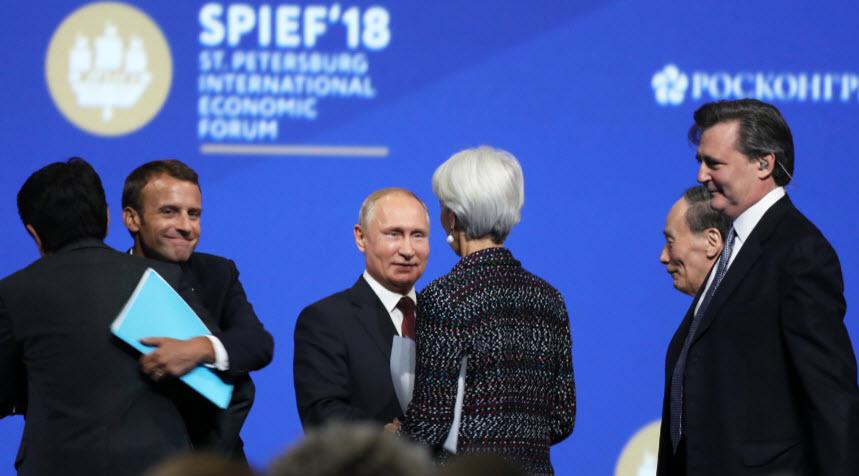 Led by an unusually outspoken Putin, Macron - who seemed more enamored with Putin than the rest, agreed with the Russian president's concerns over the erosion of trust and the specter of a global crisis brought on by Washington's disruptions.

“The free market and fair competition are being squeezed by confiscations, restrictions, sanctions,” Putin said.

“There are various terms but the meaning is the same -- they’ve become an official part of the trade policy of certain countries.”

The “spiral” of U.S. penalties is targeting “an ever larger number of countries and companies,” undermining “the current world order,” he said.

Macron replied: “I fully share your point of view.”

Such warnings only confirm Mr Putin’s world view. Without mentioning the US, he complained that the multilateral economic world order was being “crushed” by a proliferation of exceptions, restrictions and sanctions.