Is this the beginning of THE silver move that has set up so perfectly with immense short positions needing to cover along with the historically definitive “buy silver now” indicator of the gold/silver ratio at the 80+ level?

Gold futures were on track Wednesday to notch their highest finish in a week, but held to the tight trading range prices have seen over the last several sessions, as U.S. stocks turned mostly lower and the dollar stabilized. 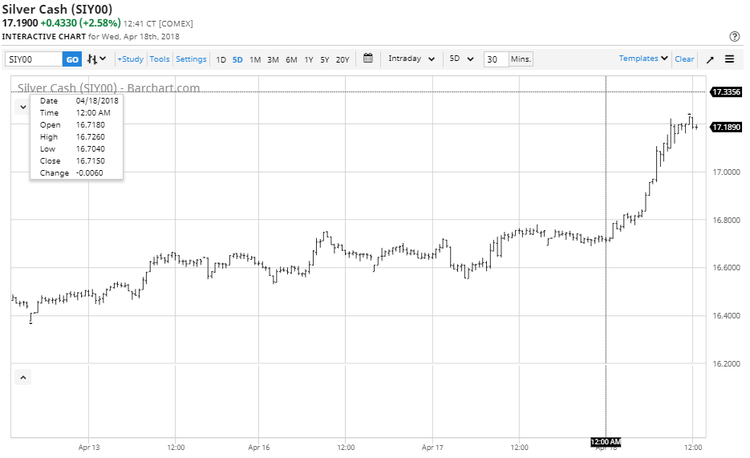 Market attention this afternoon will turn to the Fed’s Beige Book, which is scheduled to hit at 2 p.m. Eastern time, shortly after gold futures settle. It will give anecdotal evidence on economic conditions from around the central bank’s 12 districts.

New York Fed President William Dudley is due to give a speech on the economic outlook at a college in New York City at 3:15 p.m. Eastern. After that, the Fed’s vice chair for bank supervision, Randal Quarles, is slated to make remarks at the Bretton Woods Committee in Washington, D.C., at 4:15 p.m. Eastern.

ORIGINAL SOURCE: Gold prices on track for highest finish in a week by Myra P. Saefong and Rachel Koning Beals at The Gold Telegraph on 4/18/18